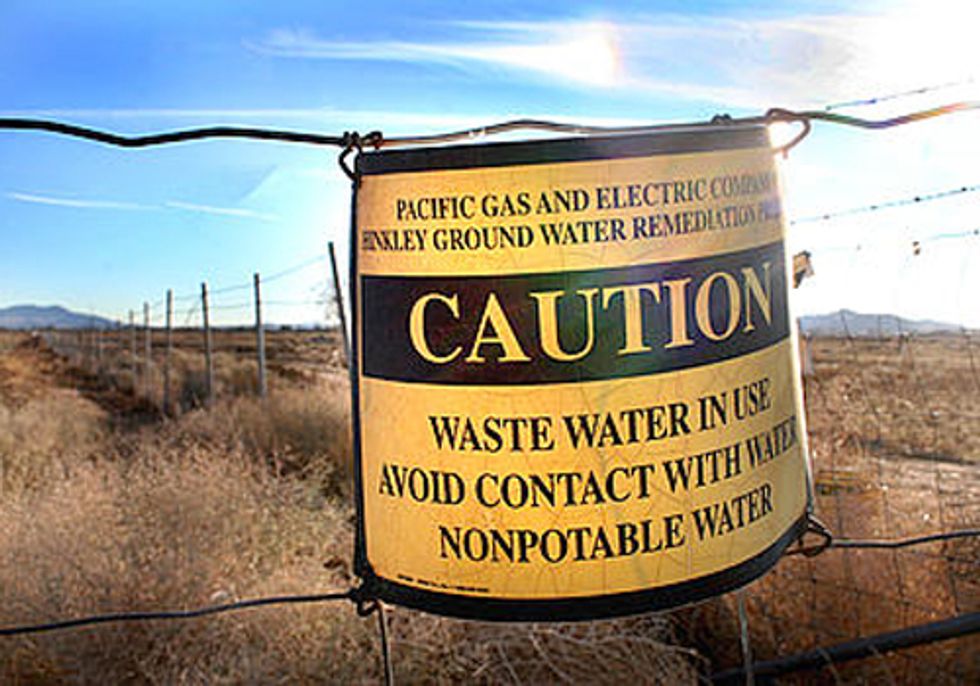 A warning of hexavalent chromium pollution in the ground water hangs on a fence in Hinkley, California. The movie "Erin Brockovich" with Julia Roberts chronicled Hinkley's uphill fight and ultimate win against Pacific Gas and Electric. Photo by David Danelski/The Press-Enterprise.

The Natural Resources Defense Council (NRDC) and the Environmental Working Group (EWG) sued the California Department of Public Health on Aug. 14 for failing to protect millions of Californians from hexavalent chromium, the cancer-causing chemical made infamous in the movie Erin Brockovich for contaminating drinking water and sickening residents in the town of Hinkley, California.

The agency was supposed to establish a safe drinking water standard for hexavalent chromium eight years ago, but has failed in its duty to safeguard citizens from the toxin.

“Millions of Californians are drinking toxic water today due to government neglect,” said Nicholas Morales, attorney at the NRDC. “The state has not protected our drinking water supply from this carcinogen, so we’re going to the courts to put a stop to it. Clean drinking water is a precious resource, and it’s about time it’s treated as such.”

An EWG analysis of official records from the California Department of Public Health’s water quality testing conducted between 2000 and 2011 revealed that about one-third of the more than 7,000 drinking water sources sampled were contaminated with hexavalent chromium at levels that exceed safe limits. These water sources are spread throughout 52 of 58 counties, impacting an estimated 31 million Californians.

In 2001, the California State Legislature mandated the agency adopt a standard by Jan. 1, 2004, giving it two years to do so. Eight years past its legal deadline, the agency still hasn’t made any visible progress and says it could take several more years before a final standard is completed. Filed in the California Superior Court of Alameda, NRDC and EWG’s suit contends the department’s delay is unjustified and it must rapidly proceed to finalize the standard.

“Communities all over California and the U.S. are being poisoned by this dangerous chemical,” said Erin Brockovich, an environmental and consumer advocate. “We have waited long enough and the people of California should not continue to be exposed to unsafe levels of this toxin in their tap water. The California Department of Public Health needs to do its job and adopt a strong standard for hexavalent chromium in drinking water.”

Drinking water sources in Sacramento, San Jose, Los Angeles and Riverside were found to exceed the safe limits of hexavalent chromium, according to a 2010 EWG report that tested 25 U.S. cities’ tap water for hexavalent chromium contamination.

The report also found this threat isn’t limited to California. At least 74 million Americans in thousands of communities across 42 states drink tap water polluted with “total chromium,” which includes hexavalent and other forms of the metal.

"You’d think the state of California would have moved quickly to protect its citizens from this carcinogen, which, sadly, still flows from the taps of millions of residents,” Renee Sharp, a senior scientist and director of EWG’s California office said. “It’s absolutely unacceptable that at this minute countless children in California are likely drinking a glass of water laced with unsafe levels hexavalent chromium.”

The California Environmental Protection Agency's Office of Environmental Health Hazard Assessment announced a final “Public Health Goal” for hexavalent chromium in drinking water in July 2011, a preliminary step in creating a drinking water standard. The goal was set at 0.02 parts per billion, a level that does not pose a significant health risk to people.

While this goal has been set for more than a year, the department has not taken the necessary steps for setting a “Maximum Contaminant Level”—the maximum concentration of a chemical that is allowed in public drinking water systems—for hexavalent chromium.

The department’s plan to take several more years to finalize a rulemaking that is already eight years behind schedule is too long, especially since the agency could fall behind its own intended schedule, and industry pressure could delay the standard even more.

Hexavalent chromium usually enters the drinking water supply by running off from industrial operations into surface waters or leaching from soil into groundwater.

Hexavalent chromium is used for the production of stainless steel, textile dyes, wood preservation, leather tanning and as an anti-corrosive as well as a variety of niche uses. Due to its wide use by industry, hexavalent chromium is a common pollutant found at contaminated sites and has been documented at approximately two-thirds of Superfund sites.