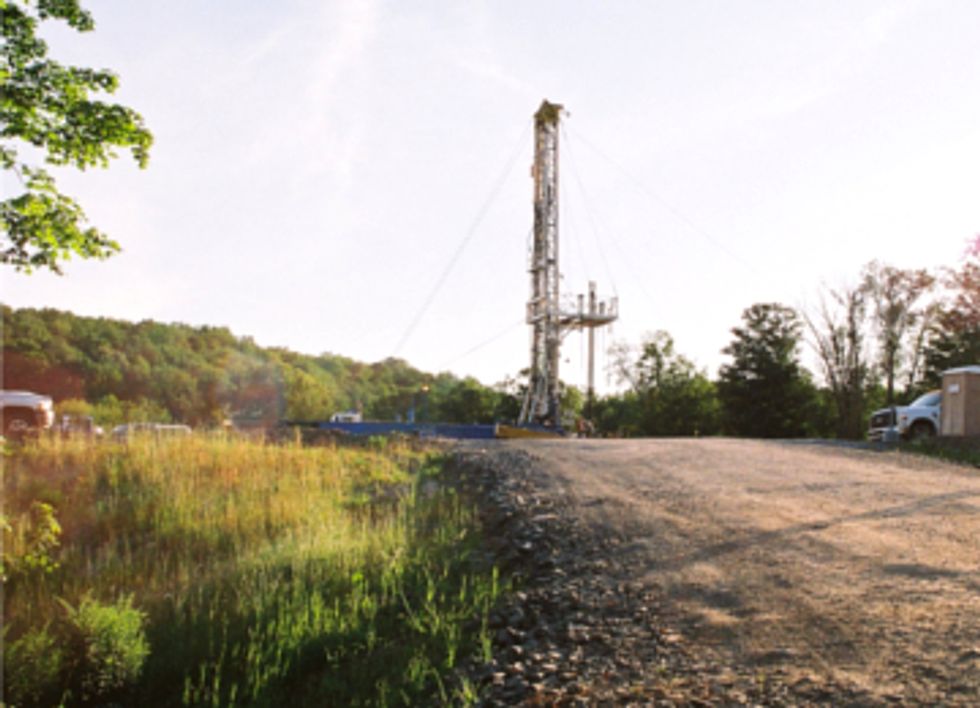 As absentee oil and gas companies register with the state of Illinois this month, downstate citizens groups are taking the lead among statewide environmental groups and laying out scientific and legal standards for the Illinois Department of Natural Resources (IDNR) and Joint Committee on Administrative Rules to consider prior to drafting the controversial horizontal hydraulic fracking rules.

In a letter sent this week to the key legislative committee and state IDNR agency officials, the groups representing rural communities targeted for fracking operations cite "several new scientific studies and academic research papers that have become available, which should be evaluated and considered before proceeding with allowing permits for hydraulic fracturing in Illinois," and conclude: "as legislators, the power to protect the citizens of Illinois rests with you. You have been armed with knowledge and research that would validate the need for an immediate halt to any drilling until the science was studied."

Or, as IDNR Director Marc Miller's conservation hero Aldo Leopold once admonished in his "land ethics": "a thing is right when it tends to preserve the integrity, stability and beauty of the biotic community. It is wrong when it tends otherwise."

Leopold's own Sand County region of Wisconsin, in fact, has been so upturned by reckless frac-sand strip-mining that nearby besieged counties have recanted their fracking support and enacted moratoriums.

"We have reached out to the Joint Committee on Administrative Rules to alert them of the significance of the new research and science that has come forth since the regulations were signed into law and of catastrophes that laws have no control over, like the situation in Colorado, where horrific flooding in Weld county caused numerous oil spills," said Tabitha Smith Tripp, with the Southern Illinoisans Against Fracturing our Environment (SAFE). "This law has no provisions or setbacks with regard to flood plains and watersheds."

Tripp also noted new scientific research released last month that indicated the mantle below the surface of the New Madrid and Wabash faults in southern Illinois is weaker than expected.

"Along with earlier research this summer directly linked fracking and injections wells to increased seismicity and earthquakes," Tripp said. "It would seem prudent that the IDNR would ban any permits in areas that are prone to earthquakes based on the science we provided."

At a recent meeting in Springfield between representatives of IDNR, Illinois People's Action (IPA) and SAFE, the key citizens groups expressed their concerns with the state's admittedly flawed legislation and the rule-making process.

"Upon inquires from IPA and SAFE, the IDNR representatives refused to acknowledge IDNR's broad authority to deny a permit application," said Vito Mastrangelo, an attorney and representative on SAFE's legal affairs committee. "Section 1-53 of the new legislation includes this provision: "(a) the Department shall issue a high volume horizontal hydraulic fracturing permit, with any conditions the Department may find necessary, only if the record of decision demonstrates that *** (4) the proposed hydraulic fracturing operations will be conducted in a manner that will protect the public health and safety and prevent pollution or diminution of any water source[.]"

Mastrangelo added: "And I asked the IDNR representatives pointedly whether, if we were to convince IDNR staff that the HVHF process was not safe, they would relay their concerns to the legislators on the Joint Committee on Administrative Rules or to the legislature. They would not agree to do so."

Signed by SAFE, IPA and a broad range of southern Illinois groups including the Regional Association of Concerned Environmentalists, Shawnee Vineyard Indian Settlement, and the Friends of Bell Smith Springs, the letter reminds JCAR legislators and IDNR officials that they will be held "responsible to protect the communities being put in harms way." It concludes:

Our plea for public protection before corporate profit is based in science and research, past and current manifestations of cumulative health concerns and environmental issues such as earthquakes, flooding, or droughts that can not be predicted nor avoided once occurring. It would be prudent to consider all of the science before allowing such a questionable method of extraction be a legacy left behind during your term.

Please consider these standards and as they are pointing to insufficient regulatory framework that will fall short in the face of a disaster, as was the case in Colorado.

Along with the letter, citizen groups included a list of demands drafted by the IPA on Disclosure and Transparency, Regulations and Inspection and Enforcement. Notably in the current process of drafting administrative rules by the IDNR, the list includes:

1. With regard to disclosures about the rule-making process, the Illinois Department of NaturalResources (IDNR) shall: (Creed #1, 3, 6)

c. Name scientists and/or direct action leaders on the [hydraulic fracturing committee] submitted by Illinois People’s Action and/or other Illinois social, political or environmental groups who share the opinions of those Illinois citizens working to oppose hydraulic fracturing.

2. With regard to personnel responsible for approving or rejecting hydraulic fracturing permits, the IDNR will:

a. Disclose the qualifications of personnel responsible for issuing hydraulic fracturing permits and provide a list of the permits issued by said personnel.

b. Identify the qualifications of personnel responsible for inspecting, approving, or rejecting hydraulic fracturing and their capacity to verify information provided by the applicant.

c. Identify the capacity of personnel responsible for approving or rejecting hydraulic fracturing to access the necessary resources to conduct thorough background checks on the operators requesting permits including, but not limited to, current and past violations.

d. Increase public transparency regarding the hydraulic fracturing regulation process, disclose the number of inspectors hired as well as the nature and duration of the training they have or will have undergone before they undertake this assignment, and/or any qualifications said inspectors brought to the position before being hired by IDNR.

3. Require all hydraulic permit applications to publicly disclose the depth, direction(s) and length(s) of any and all drilling done in relation to a single well head, and make this information available on the IDNR website.

4. Public Disclosure: Real time reporting and transparency: IDNR shall not issue a permit until the following public information and emergency notification systems are in place: (Creed #2, 3, 4, 5,6)

a. A list of all chemicals to be used in the well, or in the vicinity of the well, potential adverse effects of those chemicals and treatment recommended if exposed to them.

b. A Public Information guide developed in consultation with Public health officials, seismologists, and emergency medical and rescue workers and published on the IDNR site and distributed in booklet form to residents within 1 mile of any part of a fracking operation (including any part of an underground horizontal leg).

c. The company Material Safety Data Sheet (MSDS) for each chemical or product used in the well or its vicinity during any stage or for any action related to the hydraulic fracturing process.

i. The MSDS must also be distributed to local fire departments, and local and state emergency planning officials under Section 311 of the Emergency Planning and Community Right-to-Know Act. This distribution must happen at least thirty (30) days prior to use of the product on the hydraulic fracturing site.

ii. With regard to chemicals used, the MSDS shall list all chemicals to be used in the well or in its vicinity, potential adverse effects of those chemicals, and recommended treatment if exposed.

d. Creation of an Operator’s Violations page on the website that is easy to locate and navigate. Violations and/or accidents are to be posted within 48 hours of an event, with easy-to-comprehend descriptions of:

i. what caused the event;

ii. what were the damages to property, life, environment, public health;

iii. closure of operation (even if temporary);

v. the dollar amount of fine.

Items to be reported include but are not limited to: traffic accidents, well-casing failures, spills, dumping of produced water, frack pad fires, overflow of open pit storage, intentional or accidental venting of methane, increased levels of methane and/or other chemicals in surrounding groundwater, soil or air, explosions, radiation leaks/exposure, transportation spillage, and aquatic and wildlife kills.

5. If a hydraulic fracturing company contests a penalty, or negotiates with the State of Illinois or a private citizen to settle a dispute out of court, all such settlements and/or lawsuit decisions must be described on the IDNR web site. If a hydraulic fracturing company requires that a settlement or details of a court decision be kept confidential in order for settlement to be reached, the IDNR will refuse to grant any future drilling permits to said company until the settlement details or court case details are publicly disclosed as required by the IDNR.

Recognizing that many of hydraulic fracturing’s effects on public health have yet to be determined, and further recognizing that only the open sharing of health data will allow such detrimental health effects to be discerned, the IDNR hereby calls for a completely transparent approach to all health records likely to be related to hydraulic fracturing. In the event that IDNR learns through its inspectors or citizen reports of a public health occurrence or occurrences reasonably believed to be connected with a hydraulic fracturing site, IDNR will publish the details of such events, though not the names of the affected individuals unless permission is secured from citizens affected negatively by exposure to the hydraulic fracturing process. The IDNR further requires that any non-disclosure agreements as related to disputes, settlements or court cases between physicians and industry or patients and industry are forbidden.