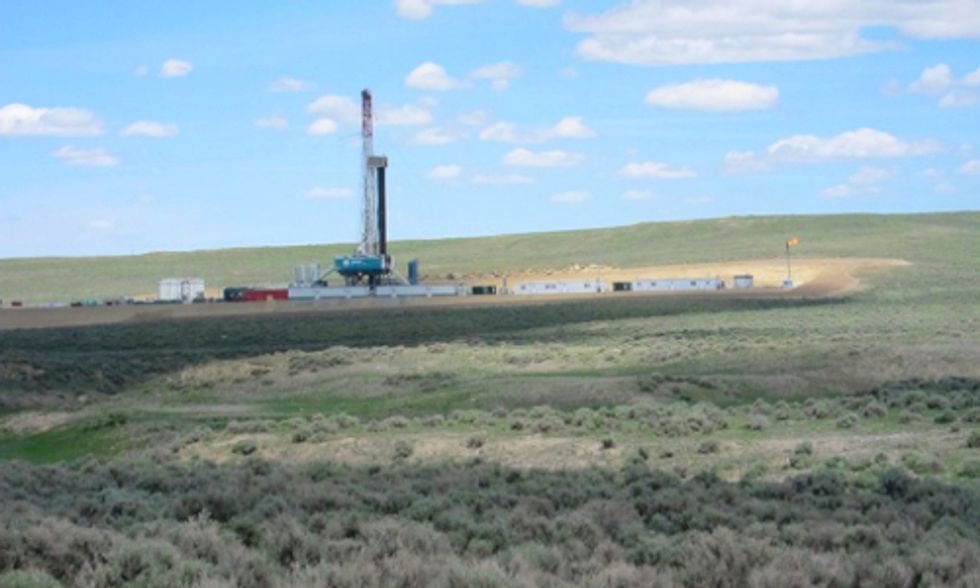 Drilling in the Douglas Core Area undermines the efforts of local residents and ranchers to protect sage grouse habitat. The male sage grouse shown in its mating display.

Today, conservation groups formally petitioned the federal government to halt all new wellpad and road construction inside the Douglas sage grouse Core Area of eastern Wyoming. Core Areas were originally established by the State of Wyoming to provide a safe haven for sage grouse and provide enough protection that Endangered Species Act listing would become unnecessary.

Current levels of human-caused disturbance already exceed 15 to 22 percent of the habitat in the Core Area, far above the five percent limit established in state and federal Core Area policies to provide habitat for imperiled sage grouse. Chesapeake Energy and the State of Wyoming recently announced plans for a massive push for more drilling inside the Core Area, while reducing protections for sage grouse.

“We’re asking the federal government to halt new construction on public lands and minerals inside the Core Area,” explained Erik Molvar, wildlife biologist with WildEarth Guardians. “These Core Areas represent the last best habitat remaining for the sage grouse in Wyoming. If state and federal agencies don’t deliver on the protections they promised, then the whole Core Area concept will be exposed as an imaginary safety net with no webbing.”

“The year that we had two wells flaring right next to our community, we lost our gardens from the dust and the flaring and the noise and the trucks, we had no insects and pollinators, and the birds were all gone,” recalled Kathleen Kilsdonk, a rural resident whose home is located inside the Douglas Core Area.  “When the drilling moved away, the grouse started coming back.”

The plan negotiated between the State of Wyoming and Chesapeake Energy would involve the construction of at least 93 new wellpads, while dividing the Core Area into three zones with varying levels of exemptions from the sage grouse protections that are supposed to apply inside Core Areas under state and federal policy.

"If the Bureau of Land Management (BLM) is serious about recovering sage grouse populations and avoiding an Endangered Species Act listing, increasing the surface disturbance to this degree in the Douglas core area is the wrong path to go down," observed Duane Short, wild species program director with Biodiversity Conservation Alliance.

"The U.S. Fish and Wildlife Service has stated it will consider Chesapeake's drilling in the Douglas core area as it makes its decision whether to list the bird," Short continued. "A lot of eyes are being opened further to the inability of the state's core area strategy to meaningfully protect and recover sage grouse."

Last Friday, the U.S. Fish and Wildlife Service proposed the bi-state population of greater sage grouse in the Mono Basin of California and Nevada for listing as Threatened under the Endangered Species Act.

“Essentially the same or more intense threats to greater sage grouse in Nevada and California exist in Wyoming and its surrounding states,” Short added. “Wyoming and all states with sage grouse populations should see this U.S. Fish and Wildlife proposal as a wakeup call to adopt stronger protection efforts for the imperiled bird.”

Drilling in the Douglas Core Area undermines the efforts of local residents and ranchers to protect sage grouse habitat. “The Wyoming people who live in the Core Protection Area have followed the rules set to maintain sage grouse even though it costs money and hasn’t always been convenient,” said Kilsdonk. “Why should the oil and gas industry be exempt? They want to put so many wells in our little area that I can’t believe they can think they’re going to get the grouse back, or protect local residents from the pollution.”

The Douglas Core Area is part of the Powder River sage grouse population, which is already experiencing a greater population decline than birds in other parts of the state.

Molvar proposes a solution that would improve conditions for sage grouse instead of making them worse. “Before Chesapeake bulldozes in any new wellpads and roads in this Core Area, first they need to restore enough already-damaged habitat to its original condition so that the amount on non-functioning habitat stays below five percent, even with the new drilling.”