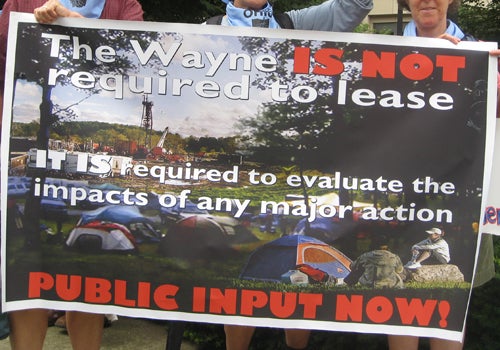 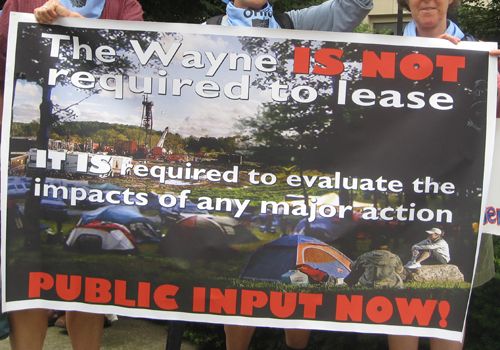 The letter, which was sent to the BLM Eastern States Director John Lyon and Department of Interior, states that federal law requires a site-specific Environmental Impact Statement prior to leasing, echoing recent appeals to Wayne National Forest (WNF) by State Representative Debbie Phillips, Athens City Council, Buckeye Forest Council, Earthjustice, and thousands of citizens in petitions and rallies in the past two months.

Matthew McFeeley, NRDC author of the letter, said, “The BLM and the Forest Service cannot turn a blind eye to the real risks that drilling and fracking pose to our forests and to communities that surround them. Federal law requires they analyze those risks and give the public a chance to weigh in on what private companies want to do in our public forests.”

The NRDC letter states, “The National Environmental Policy Act (NEPA)…requires agencies to evaluate the environmental impacts of all federal actions which may significantly affect the human environment. This analysis must be performed prior to any irreversible or irretrievable commitment of resources. Leasing represents that critical stage of agency decision-making which results in an irreversible and irretrievable commitment of resources. In order to satisfy the legal requirements, the analysis must evaluate the site-specific impacts of oil and gas leasing. Yet neither the BLM nor the Forest Service has been undertaking the requisite site-specific analysis before leasing has occurred.”

Wayne officials claim the site-specific analysis can come after leasing. They are presently concluding an internal Review of New Information (RONI). The RONI is not a NEPA process, in part because it does not meet NEPA requirements to include public participation. WNF officials have stated that they are analyzing the 2006 Forest Plan and its EIS, which did not evaluate deep-shale drilling and horizontal hydraulic fracturing. A recent WNF Fact Sheet states that the 2006 Plan did not evaluate “this new technology.”

The NRDC letter explains the problem with this approach: “For NEPA compliance documentation, the BLM Eastern States Office appears to have relied on the environmental impact statements produced in conjunction with National Forest Land and Resource Management Plans (LRMPs), which usually make decisions regarding the lands open for oil and gas leasing. However, the analysis in these Environmental Impact Statements (EISs) is insufficient to comply with NEPA’s requirement of a site-specific analysis. Forest plan EISs merely discuss the overall impacts of potential oil and gas development on a forest. They do not address the potential impacts of leasing on specific lands, habitat, watersheds, recreational opportunities, or species. BLM’s obligations exist regardless of any consent to leasing that the Forest Service may provide. This consent does not waive BLM’s legal obligations under NEPA.”

Nathan Johnson, Buckeye Forest Council staff attorney and author of formal letters to federal agencies regarding the Wayne, agrees. “The Wayne National Forest needs to update its forest plan to account for high volume horizontal fracking—something it has not yet done. This letter sends a clear message that Forest Service and BLM also need to study fracking’s impacts on specific plots of land before the agencies can approve any leasing,” he said.

Former Athens County Commissioner Roxanne Groff, an organizer of recent Wayne protests, added, “Anne Carey does not have to do an EIS, but as this letter confirms, she can not authorize leasing until she has done so. She can simply tell the BLM that leasing is premature since the 2006 Forest Plan does not allow the Wayne to authorize leasing using the ‘new technology,’ to quote the Wayne Fact Sheet. Federal law (36 CFR 228.102) states that she cannot authorize any parcels made ‘administratively available’ by another forester until NEPA analysis of unconventional well impacts to our water, air, and local economy is completed.”