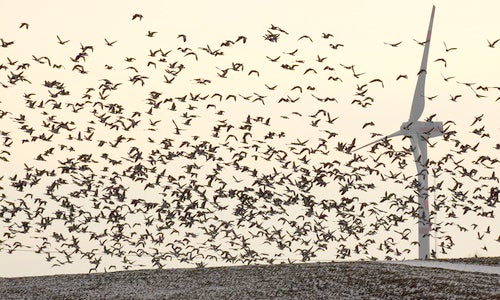 Wind energy has the lowest environmental impacts of any source of electricity generation, with modern wind power plants collectively being far less harmful to birds than radio towers, tall buildings, and numerous other human-made objects.

That fact aside, there’s no doubt about it: as a renewable energy leader, wind power is held to a higher standard with respect to wildlife than any other source of power generation we are aware of and most industries. This expectation doesn’t just come from wind’s critics and the regulatory community, it also comes from the wind industry itself by holding itself to this very high standard. All energy sources, including wind, should be held to the same high standards. 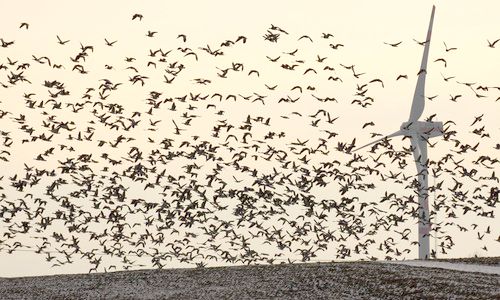 The American Wind Energy Association argues that while no power source is free of wildlife impacts, wind is the least harmful.

That’s why the wind industry has worked for years alongside mainstream conservation organizations—such as the National Audubon Society and National Wildlife Federation—who support developing wind power because of the role it plays in mitigating the negative effects of climate change—the greatest threat to all wildlife and our society. As an example of this collaboration, beginning in 2008, a number of wind energy developers began working with leaders in the conservation community to form from the American Wind Wildlife Institute (AWWI), whose mission is “[to] facilitate timely and responsible development of wind energy while protecting wildlife and wildlife habitat.”

As further evidence of the due care wind developers take to minimize their impacts, throughout the siting process and during the operation of the wind facilities the developers and owner/operators coordinate closely with the U.S. Fish & Wildlife Service (USFWS).

As a whole, the wind industry does more to study, monitor, and mitigate for the impacts associated with project development and operation than any other energy sector. When unforeseen impacts have been identified, the plant operators have worked with the USFWS to address their concerns. Further, the wind industry is making every effort to work proactively with regulators and the conservation community to improve siting practices and further reduce the comparatively small impacts on migratory birds of all kinds.

For example, through the process known as “repowering”, where numerous first-generation wind turbines (which were sited at a time when the industry was in its infancy and little was understood about the interaction between wildlife and turbines) are replaced with fewer, slower rotating, latest generation turbines in the Altamont Pass Wind Resource Area of California it has already been observed that a 54 percent lower mortality rate for raptors and 66 percent lower rate for all birds has been achieved, and that reduction in mortality is expected to increase to 80 percent or more once the repowering process is completed.

Across the Great Plains, the wind industry is voluntarily working on an effort to reduce the effect of existing facilities as well as future development. A group of wind energy companies, formally known as the Wind Energy Whooping Crane Action Group (WEWAG), have been working with the USFWS and eight state wildlife agencies over the last several years to develop a regional habitat conservation plan designed to promote conservation for whooping cranes, lesser prairie chickens and two other avian species while providing a roadmap for responsible wind energy development throughout the portion of the country with some of the highest wind resources.

Further, as generating electricity from wind does not create air or water pollution, greenhouse gases, use water, require mining or drilling for fuel, or generate hazardous waste that requires permanent storage, it represents the lowest impact form of energy generation available to our society today. This is position is reinforced by the findings of a qualitative analysis conducted in 2009 on behalf of the New York State Energy Research and Development Authority (NSERDA), which found that of all the energy sources evaluated (i.e. coal, oil, natural gas, nuclear, hydro, and wind), wind energy has by far the lowest cradle-to-grave lifecycle impacts on wildlife and their habitats.

With all of the foregoing in mind, in spite of its relatively low impacts and history of collaborating with regulators and conservationists to find ways to lessen the effects of development and operation of wind farms on wildlife and their habitats, there always is more work to do and we are striving to reduce these impacts further.

Opinion leaders are also taking note of these basic truths about wind power.

Recently, the Washington Examiner editorialized in support of wind power saying that it is “[t]ime for common sense and context on wind turbines and eagles.” Its editorial concludes, “Finding the right balance between the benefits of that infrastructure and suitable measures to protect wildlife is not always easy, but it can be done. The challenge will be more easily met when advocates of all kinds stick to the facts and calm reason.”

In December 2013, in promotion of developing more wind power, Rob Sisson, the president of the Republican-led conservation group ConservAmerica, stated “developing energy from America’s abundant renewable natural resources must be our priority, not only for the tremendous economic benefits it yields but because it’s one of the best tools available to help conserve wildlife.”

No energy source—or really any human activity for that matter—is completely free of impacts. But, the decision America faces is how we will power our country and make choices after weighing the costs and benefits. At the end of the day, after weighing all the facts, wind energy is the right choice.