Groups Call for Ban on Frac-Sand Mining in Wisconsin 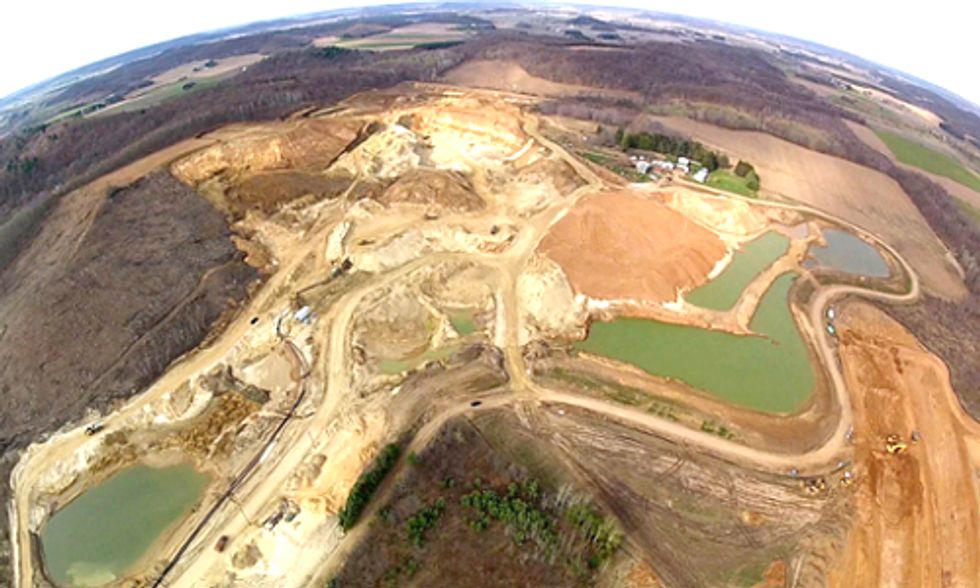 A resolution calling for a ban on frac-sand mining and a halt to attacks on local democracy has been sent to Gov. Walker (R-WI), members of the Wisconsin Legislature and state and federal environmental regulators.

The resolution was created by the Wisconsin Network for Peace and Justice's Environmental Working Group and has been endorsed by more than 75 civic and environmental organizations, including 49 Wisconsin groups and 29 groups from seven other states where Wisconsin sand is used for fracking.

An additional online petition with the same language currently has 165 individual signers.

It calls for the rejection of SB 349, a bill introduced last fall that would outlaw local ordinances from regulating frac-sand mining, local air and water quality, or blasting. The bill impacts communities facing water contamination from factory farms and potential iron mining in addition to frac-sand areas. Although the legislation raised an outcry from democracy advocates, it is likely to be reintroduced in the new session.

The number of frac-sand mines in the state has more than doubled in the past two years, to more than 140 facilities in operation or planned, according to data from the Wisconsin Center for Investigative Journalism. The industry has been exempted from environmental impact studies despite numerous complaints from nearby residents of 24-hour noise, heavy truck and train traffic, and cancer-causing silica dust.

The Wisconsin Center for Investigative Journalism reported in March that 80 to 90 percent of frac-sand sites receive letters of noncompliance from the Wisconsin Department of Natural Resources (DNR), and up to one-fifth of active sites have been cited for environmental violations, but the DNR can't keep up with all of the industry's problems. The resolution asks federal agencies to step in with tougher environmental enforcement, and ultimately seeks a statewide ban on frac-sand mining.

"Since 2011, Legislative efforts have undermined Wisconsin’s democratic tradition and conservation heritage by weakening environmental protections, eroding the authority of the [DNR] to make science-based rules, preventing DNR enforcement staff from doing their jobs, and reducing public involvement in the iron mine permitting process," the resolution says.“Wisconsin has historically used strong regulation to ensure that a clean environment is preserved for future generations because our well-informed citizens have stood up to demand it."

The resolution's endorsers are connected by struggles to protect the water, air and small farming economy from frac-sand mining in Wisconsin and fracking for natural gas in other states, for which the sand is used. The resolution cites methane leaks from fracking that contaminate local aquifers and contribute to global warming.

The resolution also goes beyond local agitation to demand broader solutions to the underlying driver of the industry, U.S. dependence on fossil fuels. It calls for improvements to the state's "Focus on Energy" program and a shift in national priorities to "energy efficiency and the development of local, clean, renewable energy sources."

The Wisconsin Network for Peace and Justice is awaiting a response to the resolution from state lawmakers and regulators.