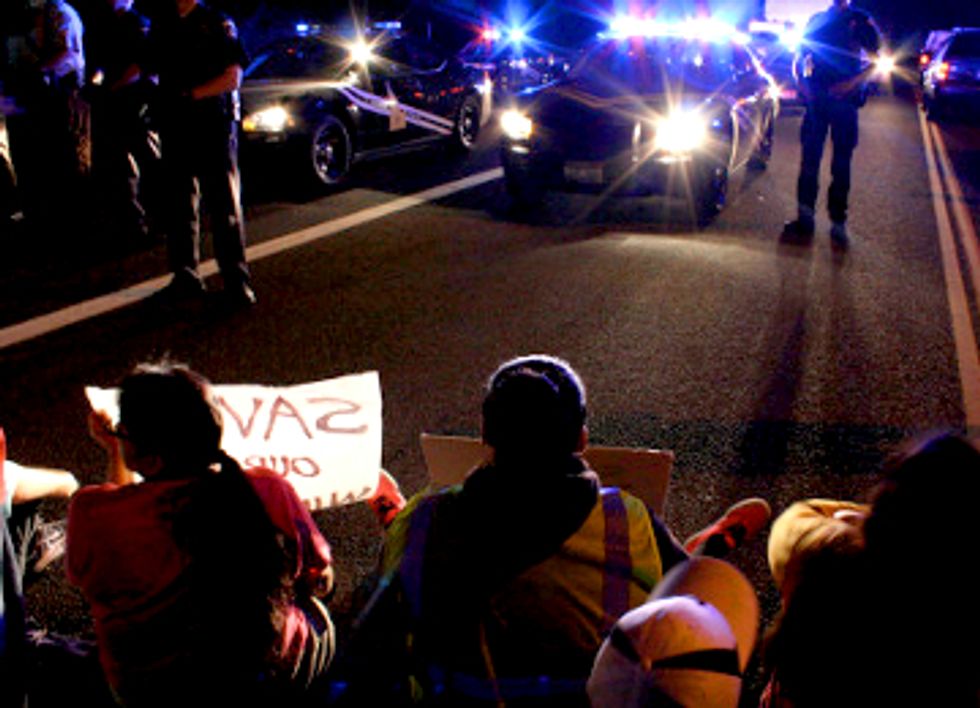 Nearly 150 members of the Nez Perce Nation were joined by Idle No More, Wild Idaho Rising Tide (WIRT) and others in a blockade of Highway 12 in Idaho late last night to stop a megaload carrying tar sands equipment.

While most people stood on the edges of the road to support the blockaders, the manifestation included about 50 people on the highway physically stopping traffic, and was the longest blockade—at three hours—since the beginning of the megaloads shipments.

The oversized water evaporator carried in the megaload had received one permit, but bypassed approval by  the U.S. Forest Service and Federal Highway Administration. The Forest Service even raised objections, but the Oregon-based shipper Omega Morgan tried to slip the megaload through unnoticed.

Judging by its position, the megaload is set to travel across Nez Perce ancestral land and a Wild and Scenic Corridor soon, so the tribal members decided to take direct action rather than wait for an injunction. Along with Idle No More and WIRT, the megaload was easily located, tracked and blocked.

In a news release, the Nez Perce stated their opposition “based on impacts to treaty-reserved resources, tribal commerce and governmental functions, federally-protected historic and cultural resources and Nez Perce national landmarks located along U.S. 12, and tribal member health and welfare.”

“I don’t look at this as a symbolic issue,” explained Silas Whitman, chairman of the Nez Perce Tribe. “Otherwise, we’d just issue a press statement, put up a few signs and just let it go. No. We’ve run out of time and initiatives. So that leaves us with disobedience, civil disobedience.”

Whitman was arrested along with more than a dozen blockaders from Idle No More and WIRT after police broke through the blockade by driving a police car through the group of people. Police used the usual tactics to break up the blockade, threatening mace, pushing activists, separating parents from children, and so on.

According to WIRT’s Facebook page, “This blockade lasted longer than any other regional megaload obstruction since the first tar sands extraction modules rolled from Lewiston area ports on Feb. 1, 2011. People are talking about further blockades on upcoming nights, perhaps in Kamiah.”