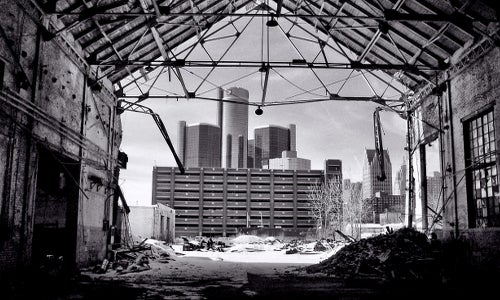 In March 2014, the Detroit Water and Sewerage Department (DWSD) announced it would begin shutting off water service for 1,500 to 3,000 customers every week if their water bills were not paid, and yesterday, the city council approved an 8.7 percent water rate increase. According to a recent DWSD document, more than 80,000 residential households are in arrears. With thousands of families now without water, and thousands more expected to lose access at any moment, a group of concerned organizations have submitted a report to Catarina de Albuquerque, the UN Special Rapporteur on the Human Right to Safe Drinking Water and Sanitation, urging authorities to take immediate action to restore water services and stop further cut-offs. The report was released by the Detroit People’s Water Board, the Blue Planet Project, the Michigan Welfare Rights Organization and Food & Water Watch. 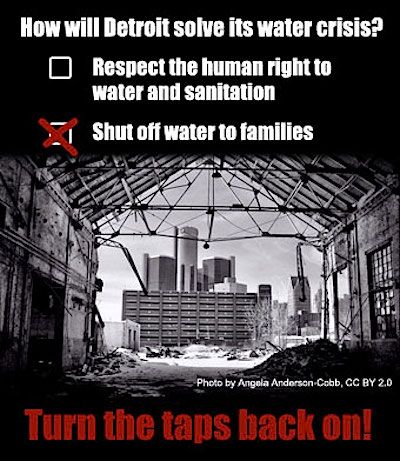 “By denying water service to thousands, Detroit is violating the human right to water,” said Blue Planet Project Founder and Food & Water Watch Board Chair Maude Barlow. “After decades of policies that put businesses and profits ahead of the public good, the city now has a major crisis on its hands. It is shocking and abominable that anyone would be subjected to these conditions.”

Over the last decade, Detroit residents have seen water rates rise by 119 percent. With unemployment rates at a record high and the poverty rate at about 40 percent, Detroit water bills are unaffordable to a significant portion of the population. Many of those affected by the shut-offs were given no warning. The infirm have been left without water and functioning toilets, children cannot bathe and parents cannot adequately prepare food for their families.

“When delinquent corporate water lines are still running without collection of funds, it demonstrates a level of intentional disparity that devalues the lives of the people struggling financially. Where is our compassion? Where is our humanity?” asked Lila Cabbil, President Emeritus of the Rosa Parks Institute.

In 2013, Detroit declared bankruptcy and appointed Kevyn Orr as emergency manager, giving him a mandate to get the city back on its feet financially. Orr has since taken steps to privatize the DWSD, and many now believe that the water shut-offs are an attempt to appeal to potential investors. In the Great Lakes region, large, private water companies charge households on average more than twice as much as rates charged by comparable publicly-controlled systems. Moreover, private operation has been linked to poor service, workforce reductions, maintenance backlogs, water leaks and sewage spills.

The groups make the following recommendations:

1. We call on the state of Michigan and the U.S. government to respect the human right to water and sanitation.

2. We call on the city to restore services to households that have been cut off immediately.

3. We call on the city to abandon its plan for further cut-offs.

4. We call on the federal and state governments to work with the city to ensure a sustainable public financing plan and rate structure that would prevent a transfer of the utility’s financial burden onto residents who are currently paying exorbitant rates for their water services.

5. We call for fair water rates for the residents of Detroit.

6. We call on the city of Detroit to implement the original water affordability program.