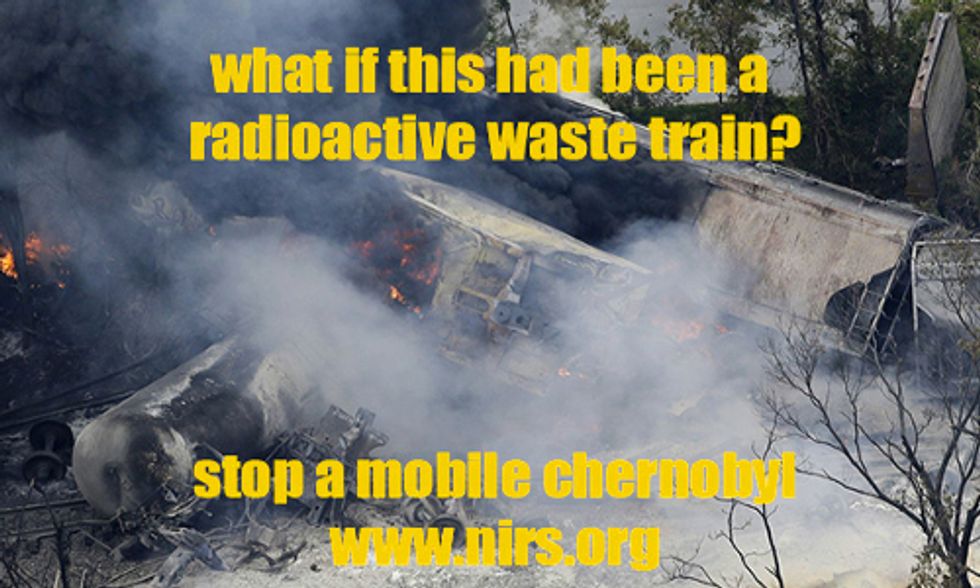 Yesterday, a national environmental group and more than 42,000 individuals delivered a message to the U.S. Senate, urging the Energy and Natural Resources Committee to cancel plans for legislation that would begin mass transportation of high-level radioactive waste throughout the country. Nuclear Information & Resource Service (NIRS) coordinated the national petition drive over concerns that the proposed bill, S.B. 1240, neglects the safety of radioactive waste storage in communities hosting nuclear power sites.

S.B. 1240, the Nuclear Waste Administration Act of 2013, was introduced earlier this year by Senate Energy Committee chairman Ron Wyden (D-OR) and Sen. Murkowski (R-AK), Sen. Feinstein (D-CA) and Sen. Alexander (R-TN). It would encourage the siting of “consolidated interim storage” facilities to house the nation’s stockpile of irradiated nuclear reactor fuel until one or more final repositories for it are eventually developed.

Dubbed the new “Mobile Chernobyl” bill, it would initiate tens of thousands of shipments of irradiated fuel by road and railways. Federal studies conducted for the first Mobile Chernobyl bill in the late 1990s confirmed that the large number of shipments involved make it all but inevitable that waste transportation accidents will occur.

“Interim storage of high-level radioactive waste was a bad idea when proposed by the nuclear industry in the 1990s—and which led to a veto of such a bill by President Clinton, upheld by the Senate and it remains a bad idea now,” said Michael Mariotte, executive director of NIRS.

“The only purpose of 'interim' storage is to encourage the generation of more radioactive waste even when there remains no scientifically-defensible, publicly-acceptable long-term solution to this vexing problem," continued Mariotte. "Rather than addressing this fundamental issue, 'interim' storage would simply kick the can down the road while endangering the tens of millions of Americans who live near waste transport routes—primarily major highway and railways.”

The “Mobile Chernobyl” bill would initiate tens of thousands of shipments of irradiated fuel by road and railways. This map shows proposed nuclear waste transportation routes.

While prematurely beginning to move the waste, the bill does not address the immediate safety risks of facilities storing the waste at the nuclear power stations where it is generated. Nearly all of the nation’s 100 plus power reactors store the waste in pools that are now packed as densely as the reactor cores, but with 6-10 times as much fuel in them.

An accident in a fuel pool could result in radiation releases that could dwarf even a major nuclear accident like Chernobyl or Fukushima. Scientific experts, including the U.S.’s highest scientific body, have long recommended that the removal of fuel from the pools into passive, dry storage containers be a top priority for national security and nuclear safety.

In addition, S. 1240 could derail federal efforts to develop a viable final repository. The bill would change current law by effectively separating the siting of “interim” storage facilities from the repository program by making it optional to locate them at the same site. In the best case scenario that a final repository for nuclear waste is developed, the waste would most likely have to be moved again, effectively doubling the risk of transportation. In the worst case scenario, facilities created for temporary, “interim” storage could become de facto above-ground nuclear waste dumps.

“There are some provisions of S. 1240, which is based largely on the recommendations of the recent Blue Ribbon Commission on America’s Nuclear Future, that merit further discussion and debate,” added Mariotte.“For example, the concepts of establishing a new agency to address radioactive waste issues and the establishment of a new consent process for siting of a permanent waste facility deserve a more complete examination and focus on the details of how these would work. But inclusion of 'interim' storage provisions make the bill a non-starter at this point.”