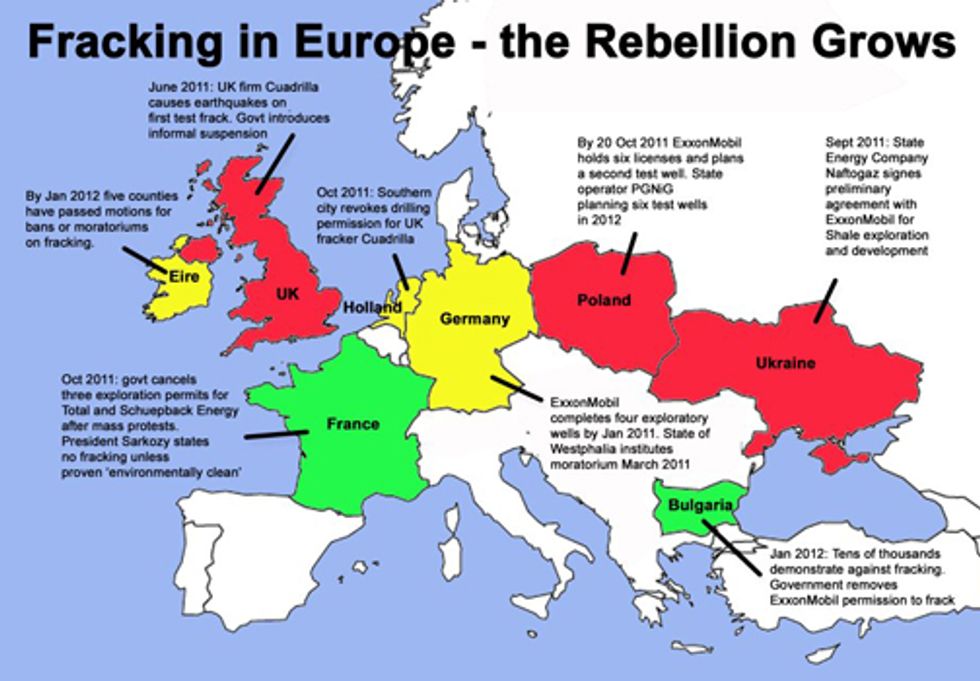 Commission studies, released last Friday, find the risks associated with large-scale shale gas development and fracking to be high and in some cases very high. The studies draw special attention to the cumulative environmental impacts of multiple shale gas wells. Eight key pieces of the European Union (EU) environmental acquis are identified as being ill-equipped to deal with the water, waste, liability, air quality and other issues of large-scale use of hydraulic fracturing.

The findings in these studies roundly debunk European Energy Commissioner Günther Oettinger’s view that current EU law adequately deals with the risks of fracking. Given the manifold risks identified in this report, Food & Water Europe calls on the Environment Commissioner Potočnik to ban fracking or—at the very least—address these shortcomings by adapting the EU’s environmental regulatory framework to the ugly reality of large-scale shale gas extraction.

This focus is particularly valued, as the draft report about the environmental impacts of shale gas, drafted by MEP Boguslaw Sonik, does not even mention this key fact: Shale gas development requires a lot of wells to be drilled. For example, a mature shale play like the Barnett shale in Texas has 15,000 wells. In other words, unconventional gas is profoundly different from previous European experiences with onshore, conventional gas exploitation.

In sharp contrast to Commissioner Oettinger’s earlier claim that existing European environmental regulation for shale gas activities would be adequate, the report clearly identifies gaps in eight cornerstones of the EU’s environmental acquis, such as the Environmental Impact Assessment Directive, Water Framework Directive, Environmental Liability Directive, Industrial Emissions Directive, Mining Waste Directive, etc. For example, the DG Environment study (pp. 108-109) finds that the Groundwater Directive, particularly Article 6 requiring Member States to develop measures to prevent or limit inputs of pollutants into groundwater, “could in principle involve the prevention of hydraulic fracturing operations, should the latter involve the injection underground of pollutants”. Given this obligation, Member States open themselves to major liabilities in case of environmental damage linked to less than adequate regulation of this risky industry.

Major gaps were also identified in the Environmental Impact Assessment Directive. “The upcoming review of the Environmental Impact Assessment Directive during the fall of 2012 must include fracking in its list of activities, which require a mandatory impact assessment,” said Hauter. Impact assessments are crucial, as they help to establish sound baseline data about e.g. groundwater and air quality, identify seismic risks and help secure a meaningful involvement of local communities before drilling commences.

To avoid a situation, as occurred in the U.S., where policy-makers are engaged in a regulatory catch-up exercise with the shale gas industry, European Environment Commissioner Janez Potočnik must now start leading the EU’s effort to—in the absence of unanimous support among EU Member States for a ban on fracking—demand the highest environmental standards of fracking operations to avoid that EU Member States treat environmental and human health impacts differently.

Food & Water Europe works to ensure the food, water and fish we consume is safe, accessible and sustainable. So we can all enjoy and trust in what we eat and drink, we help people take charge of where their food comes from, keep clean, affordable, public tap water flowing freely to our homes, protect the environmental quality of oceans, force government to do its job protecting citizens, and educate about the importance of keeping shared resources under public control.