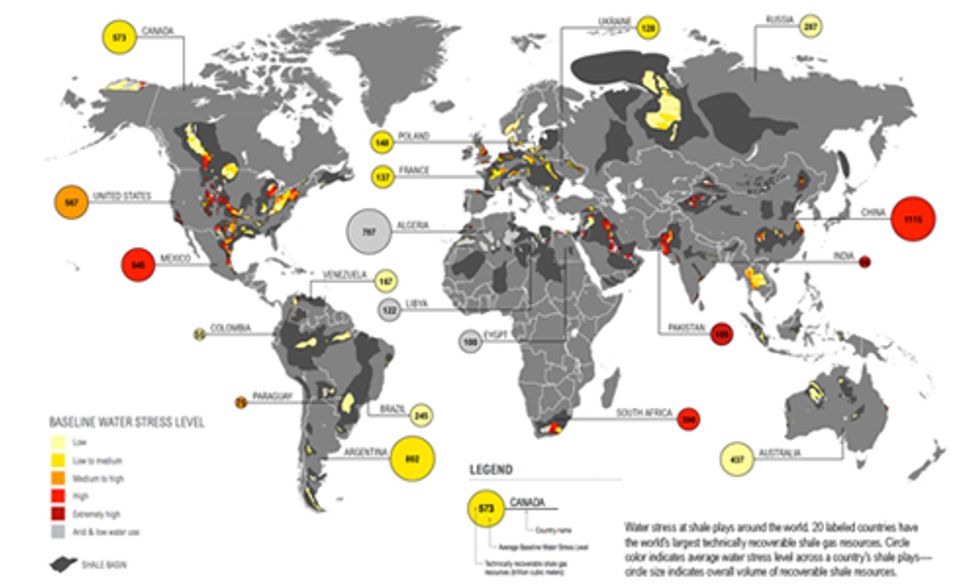 On World Water Day, the World Resources Institute (WRI) has released a study that maps for the first time the water resources available to support fracking in the world's largest shale exploration areas. The study, "Global Shale Gas Development: Water Availability and Business Risk," found that 40 percent of countries with the largest shale energy resources could suffer from water stress: competing demands on their renewable water supply that could make it problematic to use that water for fracking.

World Resources Institute mapped the availability of water resources to support fracking in the biggest shale exploration areas around the world.

"Hydraulic fracturing requires up to 25 million liters of fresh water per well, meaning shale resources can be hard to develop where fresh water is hard to find—including in some of the world’s fastest-growing economies and populations," said the report. "In general, shale energy production is vulnerable wherever surface or groundwater is limited."

It cites competing demands for water as an issue in densely populated countries like the United Kingdom, where more than a third of its shale resources face high water stress.

"As water demands increase, other water users like farms and homes around these plays face higher competition for water," reported WRI. "This could potentially spur water conflicts for the 386 million people who live on land above shale plays, particularly in regions where changes in precipitation and temperature could alter water supplies."

It also issued a series of recommendations for evaluating fresh water availability prior to developing potential shale energy resources and maintaining an adequate water supply for other uses. They include conducting water risk assessments; increasing transparency and engagement among citizens, businesses and regulations; ensuring adequate oversight of water supplies; and minimizing fresh water use in shale energy development.

“Water risk is one of the most important, but underappreciated challenges when it comes to shale gas development," said WRI CEO Andrew Steer. "With 386 million people living on land above shale plays, governments and business face critical choices about how to manage their energy and water needs. This analysis should serve as a wake-up call for countries seeking to develop shale gas. Energy development and responsible water management must go hand in hand.”