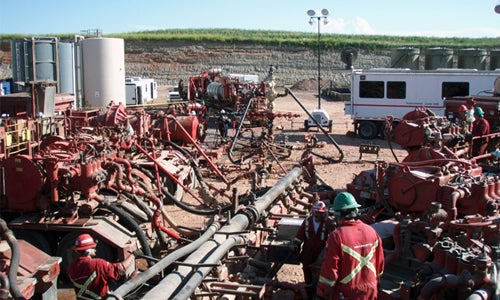 A groundbreaking study published Tuesday in Seismological Research Letters has demonstrated a link, for the first time, between hydraulic fracturing (“fracking”) for oil and gas and earthquakes.

The report, Hydraulic Fracturing and Seismicity in the Western Canada Sedimentary Basin, confirms the horizontal drilling technique (which in essence creates an underground mini-earthquake to open up fissures for oil and gas extraction) is responsible for earthquakes, above and beyond what is already canonized in the scientific literature. 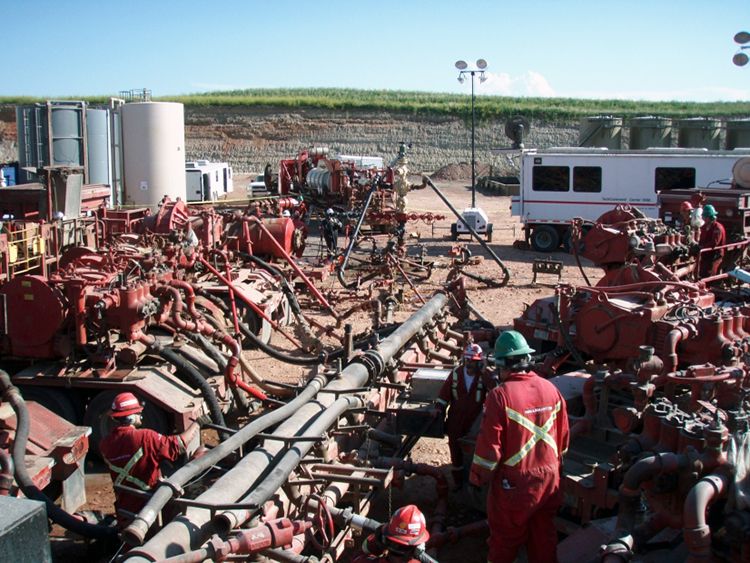 A groundbreaking study published in Seismological Research Letters has demonstrated a link, for the first time, between fracking for oil and gas and earthquakes. Photo credit: Wikipedia

We already knew that injecting fracking waste into underground wells can cause quakes. But now it’s not just the injections wells, but the fracking procedure itself that can be linked to seismicity.

The study focuses on an area in Canada known as the Western Canada Sedimentary Basin, one of Canada’s biggest shale basins and tight oil and gas producing regions.

The researchers “compared the relationship of 12,289 fracking wells and 1,236 wastewater disposal wells to magnitude 3 or larger earthquakes in an area of 454,000 square kilometers near the border between Alberta and British Columbia, between 1985 and 2015,” explained a press release. They “found 39 hydraulic fracturing wells (0.3 percent of the total of fracking wells studied) and 17 wastewater disposal wells (1 percent of the disposal wells studied) that could be linked to earthquakes of magnitude 3 or larger.”

If that sounds like a fairly small percentage, Atkinson and colleagues readily admit that is the case in the study. Yet they also write that it could portend worse things to come as more and more wells are fracked in the region.

“It is important to acknowledge that associated seismicity occurs for only a small proportion of hydraulic fracturing operations,” they wrote, proceeding to cite another paper written in 2015 by lead author Gail Atkinson—a professor of earth sciences at the University of Western Ontario—and colleagues on the impacts of induced seismicity. “However, considering that thousands of such wells are drilled every year in the Western Canada Sedimentary Basin, the implications for hazard are nevertheless significant, particularly if multiple operations are located in close proximity to critical infrastructure.”

The Western Canada Sedimentary Basin uses less water during fracking operations than in places like the current mecca of frackquakes, Oklahoma. In the paper, the authors also conclude that the massive amount of wastewater incidents in the U.S. may cloak the impact fracking has had on induced seismicity in the central U.S., which calls for more scientific investigation.

“[I]t is possible that a higher-than-recognized fraction of induced earthquakes in the United States are linked to hydraulic fracturing, but their identification may be masked by more abundant wastewater-induced events,” they explained.

One of their most important finds appears to be the definitive link the researchers found between fracking and earthquakes in the region, rather than the sheer number of quakes. They also found no link between the amount of fluid pumped into the ground during fracking and the size of the earthquake.

“More than 60 percent of these quakes are linked to hydraulic fracture, about 30-35 percent come from disposal wells and only 5 to 10 percent of the earthquakes have a natural tectonic origin,” said Atkinson in a press release. And “if there isn’t any relationship between the maximum magnitude and the fluid disposal, then potentially one could trigger larger events if the fluid pressures find their way to a suitably stressed fault.”

What’s the big takeaway, then, according to the paper? Of course, a call for more investigation, but in the meantime they also call for more thoughtful public policy moving forward.

“The nature of the hazard from hydraulic fracturing has received less attention than that from wastewater disposal, but it is clearly of both regional and global importance,” they wrote in the conclusion. “The likelihood of damaging earthquakes and their potential consequences needs to be carefully assessed when planning HF operations in this area.”