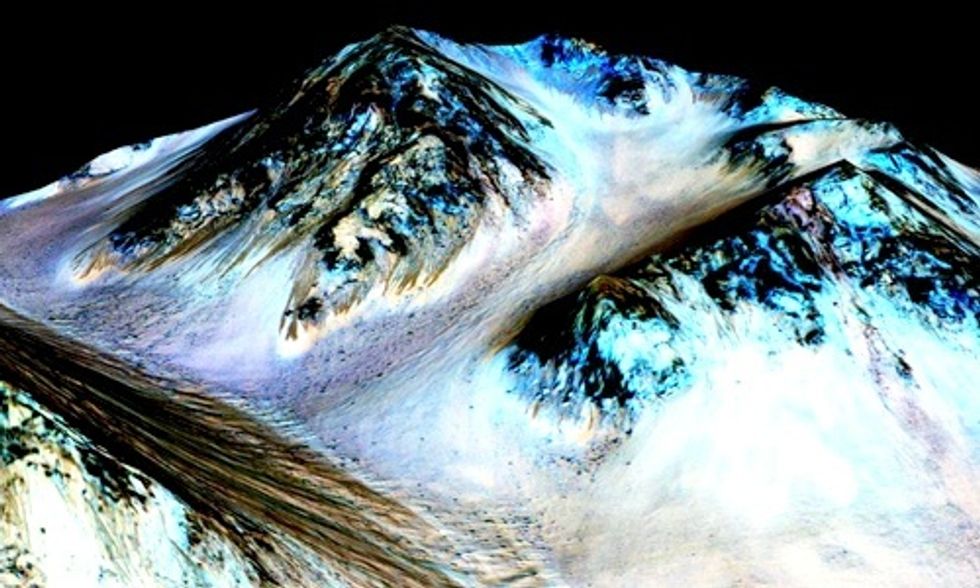 In a major scientific announcement, NASA has found evidence of liquid water on present-day Mars.

"Mars is not the dry, arid planet that we thought of in the past," said Jim Green, NASA Planetary Science Director, in a press conference. "Under certain circumstances, liquid water has been found on Mars."

For about a week, NASA kept this "major Mars mystery" a secret from the public. And today, millions of viewers tuned into the space agency's live-streamed announcement, and even fueling speculation that there could be (or was) life on the Red Planet, as water is essential to life.

“Our quest on Mars has been to ‘follow the water,’ in our search for life in the universe, and now we have convincing science that validates what we’ve long suspected,” said John Grunsfeld, astronaut and associate administrator of NASA’s Science Mission Directorate in Washington.

“This is a significant development, as it appears to confirm that water—albeit briny—is flowing today on the surface of Mars,” Grunsfeld continued.

The findings come from an imaging spectrometer on NASA's Mars Reconnaissance Orbiter (MRO), which has been roving the planet since 2006.

Scientists have long theorized that water, in the form of trapped ice, was already present on the Martian planet. "Though young Mars was inundated by rivers, lakes and maybe even an ocean a few billion years ago, the modern moisture is modest. Scientists have long known that large amounts of water remain—but frozen solid in the polar ice caps. There have been fleeting hints of recent liquid water, like fresh-looking gullies, but none have proved convincing," the New York Times reported.

But with today's announcement, it now appears that the dark streaks seen on the planet are actually patches of freshly hydrated salts, which are formed by flowing water that has evaporated off the Martian surface.

“That’s a direct detection of water in the form of hydration of salts," Dr. Alfred S. McEwen, a professor of planetary geology at the University of Arizona and the principal investigator of images from the MRO, told the New York Times. “There pretty much has to have been liquid water recently present to produce the hydrated salt.”

NASA explained that the darkish streaks appear to "ebb and flow over time," adding that they darken and "appear to flow down steep slopes during warm seasons, and then fade in cooler seasons."

"They appear in several locations on Mars when temperatures are above minus 10 degrees Fahrenheit (minus 23 Celsius), and disappear at colder times," NASA said.