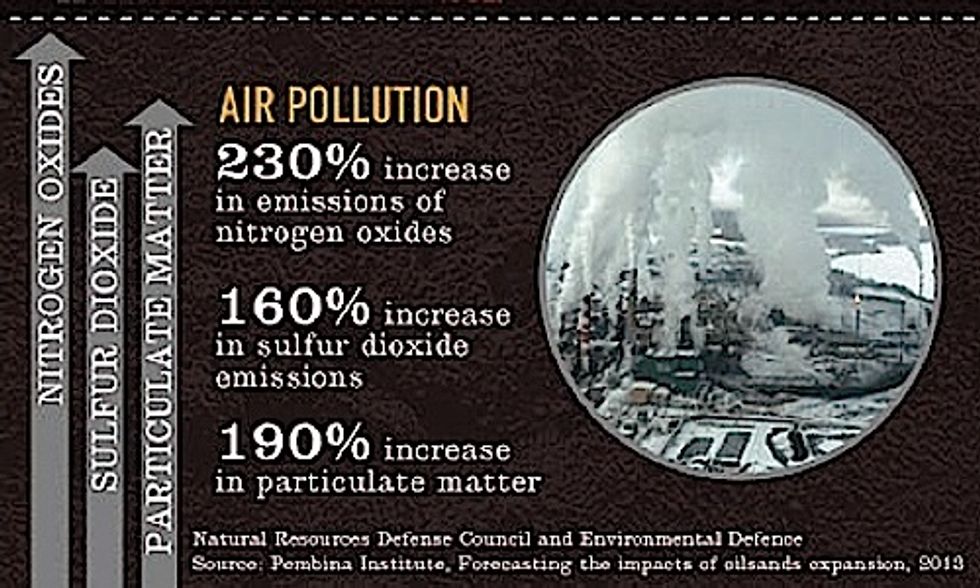 As Alberta Premier Alison Redford heads to Washington D.C. this week to push U.S. officials on the Keystone XL project, a coalition of Canadian environmental groups wrote a letter to Secretary of State John Kerry asking him to consider the impacts of tar sands production on human health and the environment, as well as the failures by the industry and the Alberta government to reduce the damaging consequences of development before making his decision.

While industry has embarked on lobbying and public relations campaigns in an effort to paint themselves as responsible resource managers, the situation in Alberta is worsening as toxics in air increase, said Forest Ethics, Environmental Defence and Canadian Association of Physicians for the Environment (CAPE) in the letter.

“If Keystone goes ahead, it will increase tar sands output significantly and push the world toward its GHG limit," said Gideon Forman, CAPE executive director. "And that's not just our doctors' view—it's the position of leading scientific publications, including Scientific American."

"As well, air pollution kills about 20,000 Canadians a year and with tar sands expansion, it will only get worse," Forman continued. "If we care about our health we need to leave tar sands oil in the ground."

The letter accompanies a new report by Environmental Defence that sets the record straight on air pollution and tar sands development. The report, Reality Check: Air Pollution and the Tar Sands, describes what the industry needs to do to clean up its act instead of spending millions of dollars trying to convince Canadians that the tar sands are not harming air quality or people.

Second in the Reality Check series of six, the report counters big oil’s claims that the tar sands impacts are under control. The reports offers a reality check about the failure of the oil and gas industry to live up to its promises to prevent irreversible damage to air, water, communities and wildlife.

The report references the most recent research, including a study that found increased incidences of rare cancers associated with these dangerously high levels of air pollution, including leukemia and non-Hodgkin’s lymphoma in the region around the tar sands. Yet in the Alberta tar sands region, companies frequently break existing environmental rules—two-thirds of the broken rules related to air quality—and aren’t penalized when they do, according to Environmental Defence.

“Saying the tar sands are responsibly managed from an environmental perspective is like saying you’re on track with a diet while eating six chocolate cakes a day,” said Hannah McKinnon of Environmental Defence. “You can’t protect the environment while pushing to expand the tar sands."

"Industry is failing to live up to existing weak regulations and the regulator is not punishing oil companies that break the rules. It’s a recipe for disaster, not responsible resource management.”

With support from Natural Resources Defense Council and 350.org, the report calls on the U.S. and Canada to move away from dirty fossil fuels, look past big oil’s slick PR campaign and demand a renewable energy future.