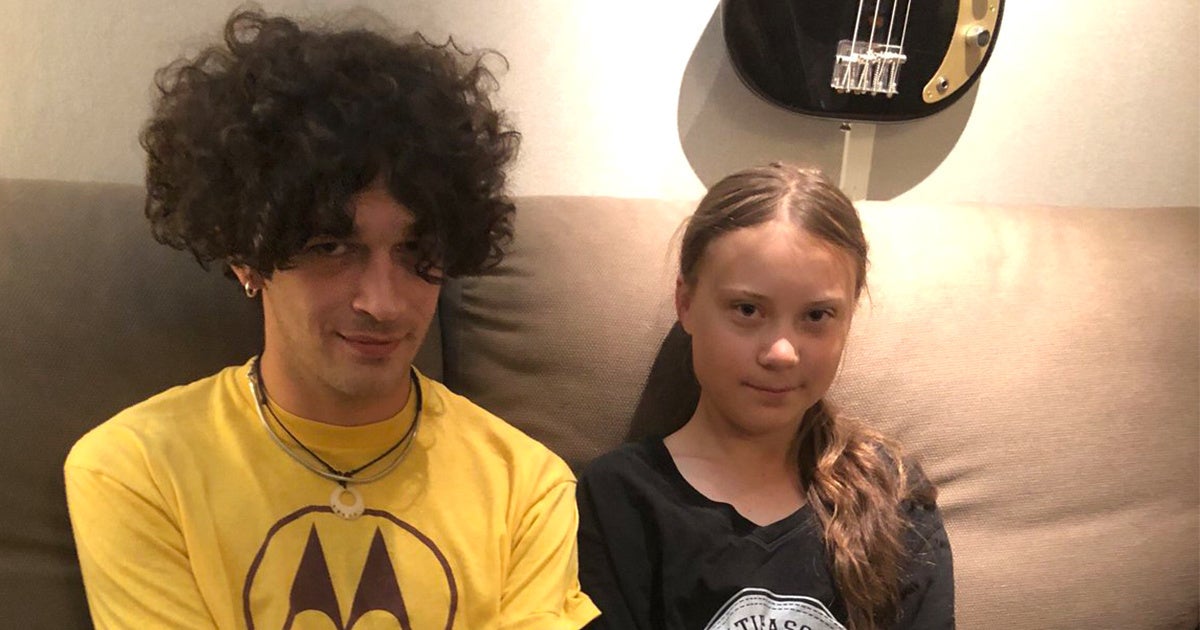 “We are right now in the beginning of a climate and ecological crisis. And we need to call it what it is. An emergency,” 16-year-old Thunberg says on the nearly five-minute song, which closely resembles her speech at the World Economic Forum in Davos, Switzerland last year. “It is now time for civil disobedience. It is time to rebel.”

Each of the band’s past three albums has kicked off with a track titled “The 1975,” but this latest version for Notes on a Conditional Form is a notable departure from the previous ones. At Thunberg’s request, all proceeds from the track will go to the climate action group Extinction Rebellion.

Speaking about the song to The Guardian, Thunberg said: “I’m grateful to get the opportunity to get my message out to a broad new audience in a new way. I think it’s great that The 1975 is so strongly engaged in the climate crisis. We quickly need to get people in all branches of society to get involved. And this collaboration I think is something new.”

Promoting the track on Twitter Thursday, the Nobel Peace Prize nominee noted that any money made from the song will go to Extinction Rebellion, whose members engage in civil disobedience across the globe to demand that governments take bolder action to address the human-caused climate crisis.Extinction Rebellion issued a “massive thank you” to Thunberg and the band in a statement Thursday.

“Greta you are an outstanding human,” said the group. “You were there when Extinction Rebellion launched back on Parliament Square in London just nine months ago. Again and again you show your support in meaningful ways — from small kind acts to things like this. We salute you sister. “

“To the 1975s, we thank you massively for your rebellious contribution and promise to put this to good use,” the group added. “We’re loving your commitment to rebel for life with us. Music has the power to break through barriers, and right now we really need to break through some barriers if we are to face this emergency. We are currently heading towards 4 degrees of heating for the world.”

Read the full text of Thunberg’s speech from the track, as transcribed by The Guardian:

We are right now in the beginning of a climate and ecological crisis.

And we need to call it what it is. An emergency.

We must acknowledge that we do not have the situation under control and that we don’t have all the solutions yet. Unless those solutions mean that we simply stop doing certain things.

We admit that we are losing this battle.

We have to acknowledge that the older generations have failed. All political movements in their present form have failed.

But homo sapiens have not yet failed.

Yes, we are failing, but there is still time to turn everything around. We can still fix this. We still have everything in our own hands.

But unless we recognise the overall failures of our current systems, we most probably don’t stand a chance.

We are facing a disaster of unspoken sufferings for enormous amounts of people. And now is not the time for speaking politely or focusing on what we can or cannot say. Now is the time to speak clearly.

Solving the climate crisis is the greatest and most complex challenge that homo sapiens have ever faced. The main solution, however, is so simple that even a small child can understand it. We have to stop our emissions of greenhouse gases.

And either we do that, or we don’t.

You say that nothing in life is black or white.

But that is a lie. A very dangerous lie.

Either we prevent a 1.5 degree of warming, or we don’t.

Either we avoid setting off that irreversible chain reaction beyond human control, or we don’t.

Either we choose to go on as a civilization or we don’t.

That is as black or white as it gets.

Because there are no grey areas when it comes to survival.

Now we all have a choice.

We can create transformational action that will safeguard the living conditions for future generations.

Or we can continue with our business as usual and fail.

That is up to you and me.

And yes, we need a system change rather than individual change. But you cannot have one without the other.

If you look through history, all the big changes in society have been started by people at the grassroots level. People like you and me.

So, I ask you to please wake up and make the changes required possible. To do your best is no longer good enough. We must all do the seemingly impossible.

Today, we use about 100 million barrels of oil every single day. There are no politics to change that. There are no rules to keep that oil in the ground.

So, we can no longer save the world by playing by the rules. Because the rules have to be changed.

Everything needs to change. And it has to start today.

So, everyone out there, it is now time for civil disobedience. It is time to rebel.