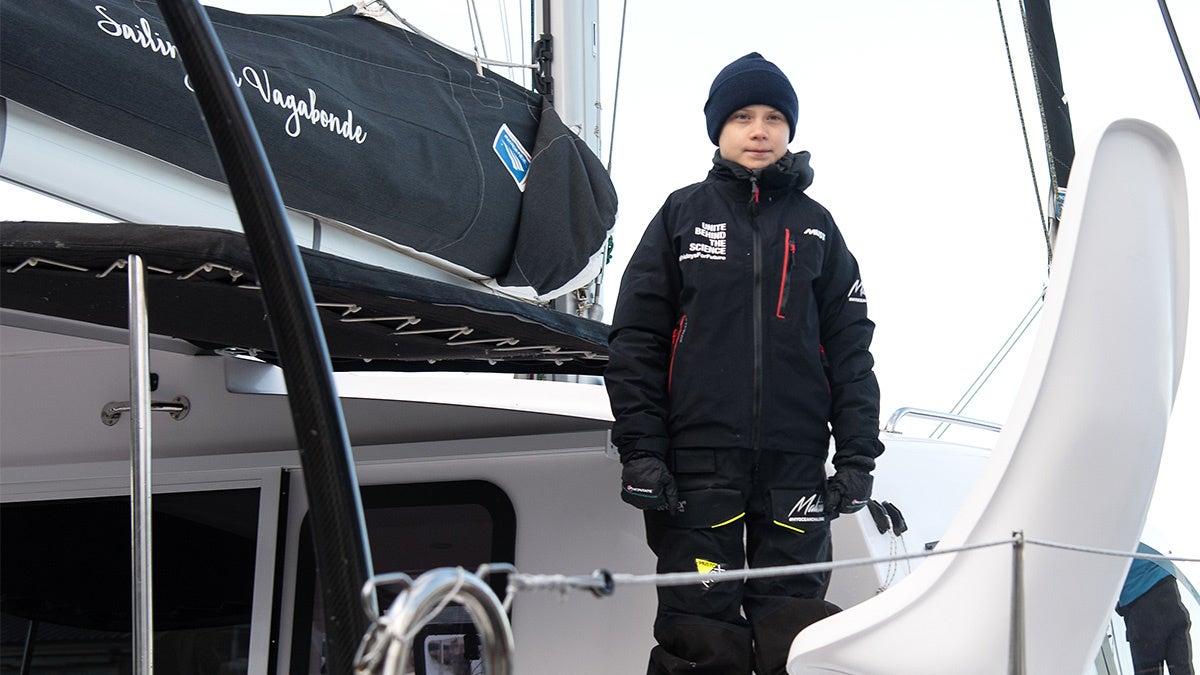 Greta Thunberg stands aboard the catamaran La Vagabonde as she sets sail to Europe in Hampton, Virginia, on Nov. 13. NICHOLAS KAMM / AFP via Getty Images

Greta Thunberg, the teenage climate activist whose weekly school strikes have spurred global demonstrations, has cut short her tour of the Americas and set sail for Europe to attend COP25 in Madrid next month, as The New York Times reported.

Thunberg’s original itinerary for the Americas was bookended by the UN Climate Conference in New York in September and the UN-sponsored COP25 in Santiago, Chile in December.

However, after large-scale protests broke out over income inequality and paralyzed Chile’s capital for two weeks, the president canceled COP25, as Ecowatch reported. Madrid stepped in as the new host of the conference, leaving Thunberg stranded. The Nobel Peace Prize finalist turned to social media for help.

“It turns out I’ve traveled half around the world, the wrong way,” Thunberg wrote on Twitter. “Now I need to find a way to cross the Atlantic in November … If anyone could help me find transport I would be so grateful.”

Another social media star stepped up to rescue her, forcing a hasty departure. Thunberg left the U.S. from Hampton, Virginia Wednesday morning with an Australian family, whose YouTube channel Sailing La Vagabonde chronicles their life aboard a 48-foot catamaran, according to CNN.

“So happy to say that I’ll hopefully make it to COP25 in Madrid,” Thunberg wrote on Instagram. “I’ve been offered a ride from Virginia on the 48ft catamaran La Vagabonde.”

Thunberg refuses to fly because of the tremendous carbon footprint associated with air travel. One round-trip flight from New York to California emits 20 percent of the greenhouse gases a typical car emits in a year, according to numbers from the EPA, as Business Insider reported. In Europe, Thunberg usually travels by train.

“I decided to sail to highlight the fact that you can’t live sustainably in today’s society,” Ms. Thunberg said yesterday afternoon, as The New York Times reported. “You have to go to the extreme.”

The Australian couple taking Thunberg back to Europe, Elayna Carausu and Riley Whitelum, will also welcome Nikki Henderson, a professional yachter from the UK, and Thunberg’s father, Svante, who accompanied her on her first journey across the Atlantic, as Business Insider reported.

Henderson is no stranger to the seas. Last year, when she was 25, she became the youngest captain ever to compete at the Clipper Round the World Yacht Race. She led her team to a second place finish, as The Guardian reported.

Carausu and Whitelum also have an 11-month-old son, which means that unlike her first trans-Atlantic trip, Thunberg will not be the youngest person on board. “Finally,” she said, as The New York Times reported.

The couple had no intention of taking the 3,200 nautical mile trip to Europe in the off-season, especially since they have a baby aboard, but they made a whimsical decision when they saw Thunberg’s tweet asking for help, the couple told CNN.

“We just said yes straight away because we just did a big 10-day sail and we loved it so much and we’re pretty keen for another adventure like this,” Carausu told CNN. “So yeah, we reached out and from there it took a day and it was like almost a done deal.”