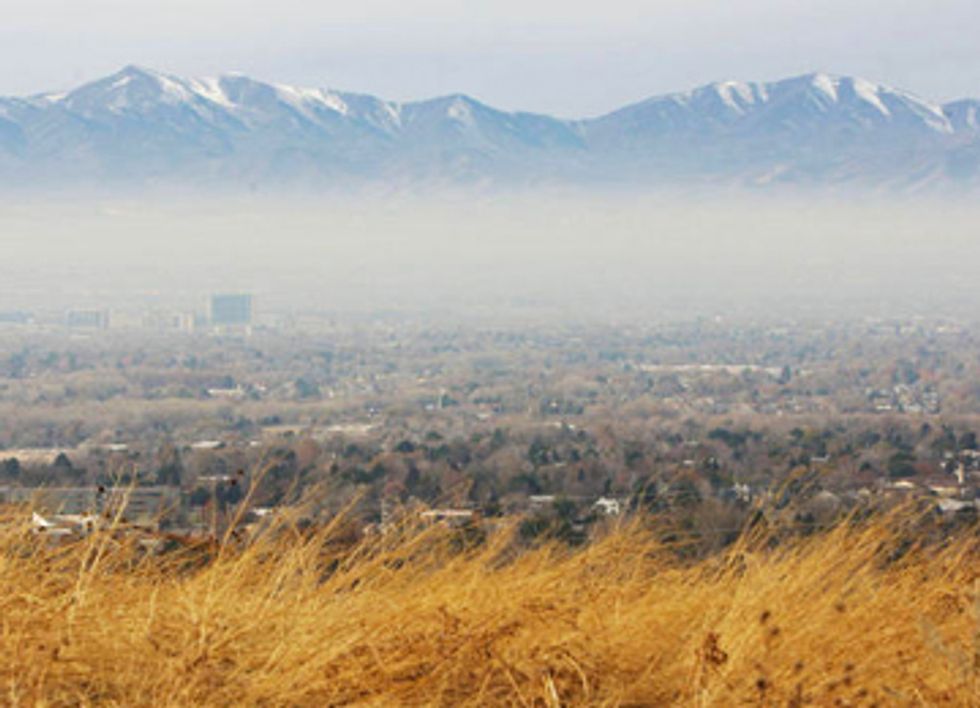 Several years ago, Utah public health officials realized they had a big problem on their hands—one with national implications as other states were racing to increase oil and gas drilling. Smog levels in the state’s rural Uintah basin were rivaling those found in Los Angeles or Houston on their worst days.

The culprit, an U.S. Environmental Protection Agency (EPA) report concluded earlier this year: oil and gas operations. The industry was responsible for roughly 99 percent of the volatile organic compounds found in the basin, which mixed under sunlight with nitrogen oxides—at least 57 percent of which also came from oil and gas development—to form the choking smog, so thick that the nearby Salt Lake City airport was forced to divert flights when the smog was at its worst.

But the haze over the Uintah isn’t the most dangerous air pollutant coming from the oil and gas fields in the valley.

A string of studies by the National Oceanic and Atmospheric Administration (NOAA) show that the core ingredient in natural gas, methane, is leaking at rates far higher than previously suspected. This methane has climate change impacts that, on a pound-for-pound basis, will be far more powerful over the next two decades than the carbon dioxide emissions that have been the focus of most climate change discussions.

The smog problem is especially pronounced in Utah. But a growing body of research nationwide suggests that methane is leaking from the natural gas industry at levels far higher than previously known.

In Washington D.C., pressure is mounting to ignore these methane leaks. The oil and gas industry says there is no time to waste. We must proceed immediately with the "all-of-the-above" national energy strategy they say, code for "drill baby drill". This pressure is coming not only from the natural gas industry itself, but also from a surprising ally: the Environmental Defense Fund (EDF), which has supported natural gas development as a “bridge” from coal to renewables.

This position has drawn renewed accusations that the EDF is “greenwashing” for the natural gas industry.

The methane leaks that researchers from the Cooperative Institute for Research in Environmental Sciences (CIRES) and from NOAA recorded ranged from 6 to 12 percent of annual production—worrisome because many researchers, including those from the EDF, say that if natural gas leaks at more than 3.2 percent overall, any climate change benefit from switching away from coal for electricity generation and burning natural gas instead will be lost.

This point bears restating: the federal officials who did actual site testing found leaks of methane at least double the rate that most experts say nullify natural gas' climate benefits over coal.

Earlier this year, the EPA released a report lowering its official estimate for methane leaks nationwide to 1.5 percent, but that estimate has been criticized for relying too heavily on “industry guesses.”

Unlike the EPA's estimate, the NOAA report is an on-the-ground measurement of leaks on one day in the Uintah, which produces 1 percent of the country’s natural gas supply.

One coauthor of the study, Colm Sweeney, from CIRES at the University of Colorado Boulder, said he was surprised by what he termed the “huge amount” of methane emissions. “We’re estimating that 9 percent of that is just leaking right out, never getting to the end of the pipeline ... to the actual user point,” he told Climate Central.

The NOAA research represents one of the first major independent initiatives to take real world cumulative measurements of methane emissions from gas leaks. The researchers had to develop new methods of assessing how much of the gas had leaked, which they say can now be used by both the federal government and industry to assess leaks elsewhere.

“We used a mass balance technique, which means we follow an air mass as it moves into the region and then flows out,” said Mr. Sweeney. “We look at the difference in methane between those two to determine an actual emissions rate for the region.”

Robert Jackson, a scientist at Duke University's Nicholas School of the Environment, and Boston University's Nathan Phillips measured leaks from natural gas distribution systems in Boston and Washington D.C., but have yet to calculate leakage rates based on their measurements.

Earlier this year, another NOAA study used aircraft and ground measurement and found roughly 17 percent of the natural gas produced in the LA region was leaking. The LA measurements represented the region’s total leaks throughout the lifecycle of natural gas production and distribution since all of the elements involved, including drilling and fracking, distribution pipelines and end-users of the natural gas, are present in the Los Angeles basin.

Into this fray has stepped the Environmental Defense Fund. The EDF is undertaking a multi-part study of methane emissions from oil and gas drilling, studying leaks at each stage, including the use of natural gas as a transportation fuel.

In Feb. 2012, EDF published a paper that found that as long as rate of emissions from a typical well is less than 3.2 percent of lifetime production, natural gas is better than coal for electrical production. That 3.2 percent is an important number, according to EDF’s report—it’s the threshold at which natural gas no longer makes climate sense as a transition fuel as a replacement for coal for the nation’s electricity.

EDF supports some regulation to curb methane leaks, but if the levels found in Utah, Boston and LA are indicative of leaks nationwide, it may be extremely difficult—and expensive—for the natural gas industry to achieve the extreme reductions necessary to fall below that threshold.

EDF has been aggressively touting its upcoming research as the definitive study on methane leaks, yet results from the first phase of the study have been long delayed.

Some in the research community fear that EDF is positioning itself to undermine independent research by portraying its series as the only definitive science on methane leaks.

“There are only two possible outcomes to this EDF study, after it’s been peer reviewed: one outcome is that the policy currently in place involves acceptable risk, the other is that it involves unacceptable risk,” said Professor Tony Ingraffea, one of the foremost experts on methane and climate change, and the co-author of a seminal paper that first called into question the claimed climate benefits of natural gas.

“It’s not that policy decisions have to be made, they’d have to be unmade,” if the study finds that leaks are higher than 3.2 percent, he added, citing EDF’s stated support for natural gas over coal.

Since at least December 2012, EDF has said that its University of Texas-led study is due out “in coming weeks.” The delays have caused speculation that either the paper ran into resistance during the peer-review process or that the methane levels found were not what the authors had anticipated.

In the meantime, EDF representatives have been giving statements to media outlets that undermine other research.

“While the Colorado and Utah studies offer valuable snapshots of a specific place on a specific day, neither is a systematic measurement across geographies and extended time periods and that is what’s necessary to accurately scope the dimensions of the fugitive methane problem. For this reason, conclusions should not be drawn about total leakage based on these preliminary, localized reports [emphasis in original],” the EDF website says in regards to the NOAA study. This post was seized on by the shale industry’s public relations arm, Energy in Depth, who used it to downplay the federal findings.

EDF itself says that it takes "no money from corporate partners" to preserve its independence.

But according to Sourcewatch, “this is extremely misleading, since EDF does aggressively seek funding from employees, board members and investors in corporations including (and probably especially) its formal corporate partners. EDF also considers on a case by case basis whether to accept major donations from foundations set up by corporations.”

The financial backing for the EDF's University of Texas study is public information and has been disclosed, meaning that their industry backing is at least transparent. What EDF has not disclosed is who sits on the review panel that will help to prepare the study for publication. Those individuals may help shape the conclusions that EDF draws from the methane leaks it records.

Even more importantly, researchers have been calling on the EDF to release the measurements it records as part of the study so that independent assessments of the data can be conducted. So far, EDF has been silent on whether it will release this data and essentially subject itself to the sort of peer review that Cornell Professor Ingraffea and Duke Professor Jackson did when they published their findings.

In terms of the long-run prospects for natural gas drilling in the U.S.—indeed for the very real chance that the energy industry is in the process of tethering our climate fate to more fossil fuel extraction for decades to come—there is no question more important than this one about methane leakages. How much of the gas is actually escaping to the environment? Are those levels as bad as coal or worse for climate change? How is all this tied to the state of renewable energy growth in America?

For now, the only thing that seems clear is that, much as Utah has a growing smog problem, clouds seem to be gathering over EDF's research.