Greenpeace Takes Action to Prevent Drilling in the Arctic 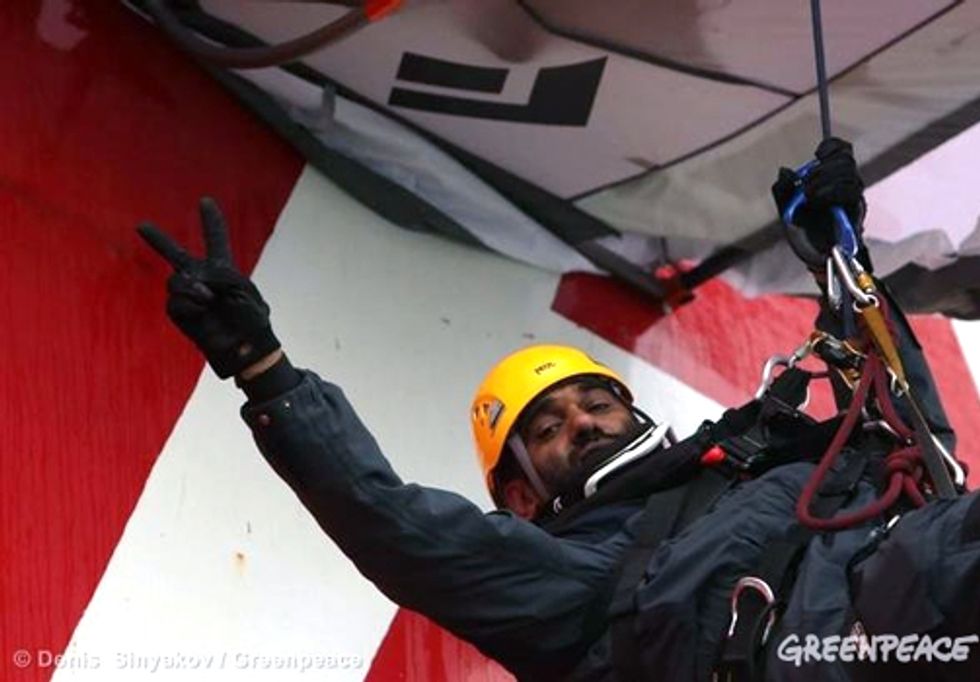 An Open Letter to the People of Russia

You may be aware that this morning at approximately 4 a.m., five activists and I scaled the Prirazlomnaya oil platform to take peaceful action against Gazprom’s work in the Arctic, to highlight the dangers of its plans to drill here in the Pechora Sea.

The amount of oil that is lost every year in spills throughout Russia is roughly equivalent to the amount that Prirazlomnaya would produce annually. It would be far less expensive for the oil companies, the government, the people of Russia, and certainly the Indigenous Peoples who depend on this environment, to simply recover and use the oil lost in spills, than it would be to exploit the pristine Arctic shelf. In short, drilling in the Arctic will not benefit the average Russian citizen.

Gazprom is set to begin dangerous drilling on the Arctic shelf with no viable oil spill response plan. It's not a question of if an oil spill will happen, but when—and when it does, Gazprom would be powerless to stop it. Just last week Greenpeace Russia uncovered a startling secret: the emergency plan for oil spill mitigation of Gazprom Neft Shelf, a Gazprom subsidiary, has expired, meaning any drilling they do here would be illegal under Russian legislation.

During my time in Moscow last week, I met with the Federal Minister of Environment and Natural Resources and his senior advisers. I met with several journalists and civil society activists, and had the privilege of speaking with Indigenous Peoples representatives on whose traditional territory much of Russia’s onshore oil drilling is carried out, with disastrous results.

Together with Greenpeace Russia, we presented data from esteemed Russian scientists—the same ones often hired by the oil industry—that confirmed those fears: Gazprom and emergency services could not cope with an oil spill disaster here. The scientists calculated 60,000 different scenarios if an oil spill were to occur at this platform, and their research showed very clearly that in fact it would take the company days to mount a serious response. Meanwhile, the toxic oil would reach the shores of three protected wildlife and nature reserves in just 20 hours.

I took part in this peaceful action today to declare—together with Russians and citizens around the world—an end to the madness that is putting the profits of an elite few above the interests and safety of the rest of us. We are also here standing shoulder-to-shoulder with the Indigenous Peoples of Northern Russia, many of whom last week signed a powerful joint statement opposing further disastrous oil drilling on and near their traditional territories, and demanding that their voices be heard in this critical debate. We humbly stand with them in their struggle.

In our desire to highlight this plight, we hope—and know—that actions do speak louder than words.

As you well know, Russia is also experiencing climate impacts. Scientists have concluded that the 2010 heat waves and forest fires were induced by a changing climate. In addition, more than 60 percent of Russia is covered by permafrost, which releases methane gas as it melts—a powerful greenhouse gas that is even more dangerous than carbon dioxide. And as the permafrost melts, the ground shifts, damaging buildings, bridges, roads, and dangerous oil and gas infrastructure. Even the Russian Ministry of Emergency has warned that by 2030, more than 25 percent of all buildings in Northern Russia could be damaged by the impacts of melting permafrost.

Time is running out for us to avert catastrophic climate change—and oil giants like Shell and Gazprom must be stopped from profiting from a disaster of their own making while doing further damage to our planet. It is clearly madness to ignore the fact that the only reason we are able to even consider drilling in these remote parts is as a result of the melting arctic ice, which is caused by emissions from oil, coal and gas. As the ice melts, our planet warms, which causes the ice to melt, and our planet to warm—it is a vicious circle.

We are effectively destroying the refrigerator or the air conditioner of our planet, destabilizing our global climate and threatening our children and grandchildren's future. Any day now, the scientific community will announce that the Arctic sea ice has reached an all-time low, below even 2007 levels. This is a disastrous record that we continue to break, and a warning cry of a planet in peril that we must not ignore.

Join me and my fellow activists at www.greenpeace.org or www.savethearctic.org and watch for live updates as the action unfolds. And please, take action with us —you can follow me on Twitter and Greenpeace on Facebook. Please share with your friends, so that together we can shine a light on this global environmental crime, and stop it before it becomes a global disaster.