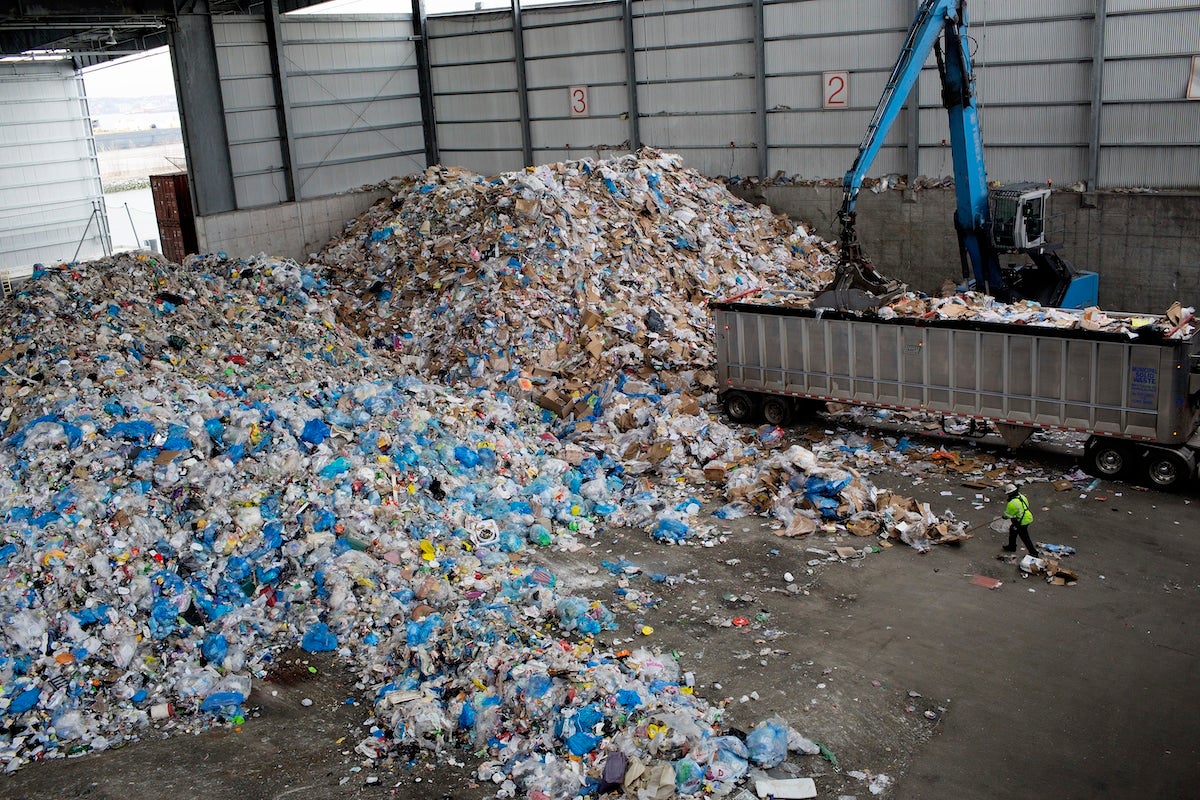 We can’t recycle our way out of the plastic pollution crisis.

That’s the definitive conclusion of a new Greenpeace report released Monday that found that only five to six percent of plastics in the U.S. were actually recycled, a major decline from the still relatively low highs of 9.5 percent in 2014 and 8.7 percent in 2018. (For comparison, glass had a recycling rate of 31.3 percent in 2018, according to the U.S. Environmental Protection Agency, while aluminum had a rate of 34.9 percent.)

“Corporations like Coca-Cola, PepsiCo, Nestlé, and Unilever have worked with industry front groups to promote plastic recycling as the solution to plastic waste for decades,” Greenpeace USA senior plastics campaigner Lisa Ramsden said in a press release emailed to EcoWatch. “But the data is clear: practically speaking, most plastic is just not recyclable. The real solution is to switch to systems of reuse and refill.”

The report, “Circular Claims Fall Flat Again,” is an update of a 2020 report that looked at the types of plastic accepted by material recovery facilities (MRFs) in the U.S. and found that only two types of plastic — Polyethylene terephthalate (PET)#1 and High density polyethylene (HDPE)#2 — could be claimed as truly recyclable under U.S. law. (PET#2 is the type of plastic used for water and soda bottles while HDPE#2 is commonly used for milk jugs and shampoo bottles, according to Miller Recycling Corporation.)

The 2022 update once again looked at the plastics accepted at 375 MRFs in the U.S. but also considered another standard of recyclability: that of the Ellen MacArthur Foundation’s New Plastics Economy (EMF NPE).

In order for a plastic to be considered legally recyclable by the U.S. Federal Trade Commission it must:

The EMF NPE definition of recyclable is even stricter. It is used to assess the validity of the Global Commitment to use 100 percent reusable, recyclable or compostable plastic packaging by 2025. To count, a material must have a 30 percent recycling or composting rate that covers at least 400 million people.

The 2022 survey found that only PET#1 and HDPE#2 bottles and jugs counted as recyclable under U.S. law. Both plastics were accepted at 100 percent of MRFs covering 60 percent of the U.S. population. However, they were also only actually recycled at rates of 20.9 percent and 10.3 percent respectively, significantly below the EMF NPE 30 percent threshold.

“In short, no type of plastic in the U.S. meets the EMF NPE definition of ‘recyclable,’” the report concluded.

Just because an MRF accepts a plastic doesn’t mean it will actually be recycled, the report pointed out. For example, the City of Knoxville, Tennessee, says it will take plastics #3-7 but then simply disposes of them instead of actually reprocessing them. But why is plastic recycling failing so consistently despite the attention drawn in recent years to plastic waste? The report gave five main reasons:

Ultimately, the report found that plastic as a material presents unique barriers to recycling that other materials like glass, aluminum and paper do not. It quoted an opinion piece published in The Atlantic by Last Beach Cleanup founder Jan Dell and Beyond Plastics president Judith Enck.

“The problem lies not with the concept or process of recycling but with the plastic material itself — it is plastic recycling that does not work,” Dell and Enck wrote.

If recycling isn’t the solution to the plastics crisis, what is? Clearly, something must be done. Plastics are already polluting the environment to an unprecedented degree, so much so that scientists concluded we have breached a planetary boundary for plastic and chemical pollution. Around 80 percent of all plastics ever produced have not been properly recycled, and yet global plastic use and waste are projected to nearly triple by 2060, with plastic pollution doubling, according to Organization for Economic Co-operation and Development figures cited by Greenpeace.

Greenpeace wants companies to take the lead on addressing the crisis by taking the following steps:

However, as the industry changes, there are still mountains of plastic waste to be disposed of and recycling innovators who argue it’s not worth giving up just yet. The Recycling Partnership, for example, works with local communities, private companies and governments to improve recycling programs and packaging with the goal of creating a circular plastics economy. The program claims it has rescued 770 million pounds of new recyclables from landfills since 2014.

“We agree that plastic recycling isn’t a panacea for plastics waste,” Recycling Partnership CEO Keefe Harrison said in a statement shared with EcoWatch. “However, the reality is that the world won’t just stop making plastic tomorrow, so what do we do today? We must partner to do the hard but impactful work of building a better system; one that focuses on reducing, reusing, and then recycling all we can.”

The Association of Plastic Recycling (APR), meanwhile, took issue with how Greenpeace arrived at its conclusion that only five to six percent of U.S. plastics were recycled.

“When looking at plastic recycling, APR uses the amount of consumer-facing packaging produced.  It appears that Greenpeace is using all plastics created as a denominator – that includes durable goods, playground equipment, railway ties, even toilet seats, that are meant to last many years as well as non-durable goods not intended for recycling such as garbage bags and other products. The plastic items that most Americans buy, use and put in their recycling bins – water and soda bottles, laundry detergent jugs, yogurt tubs – do get recycled,” APR president Steve Alexander said in a statement emailed to EcoWatch. “Consumer packaging is made mostly of PET, HDPE and PP.  Based on the latest EPA data, APR recently issued a report that found that 19% [of] this kind of plastic packaging was recycled. The latest information available for PET and HDPE bottles is from 2020 and shows a recycling rate of 28%.  PP bottles have a recycling rate of 17%.”

Greenpeace countered that it was important to account for all plastics when considering the material’s recyclability.

“To distract from the failure of plastic recycling, APR, TRP and other front groups funded by the plastics and products industries are trying to claim that the plastic recycling rate should only focus on ‘what is recyclable’ and not all plastic waste. To truly understand the scale of the problem we must look at it in its entirety,” Ramsden said in a statement emailed to EcoWatch. “Americans care about all plastic waste going to landfills, incinerators and the environment – not just plastic bottles, jugs and tubs.”

Ultimately, the Greenpeace report is focused on a systemic solution to the plastics problem, and it concludes that history reveals that recycling is not it. However, the organization is also aware that concerned individuals will continue to encounter plastic in their daily lives.

“People should continue recycling, but we have to be more realistic about recycling and its limitations,” Ramsden told EcoWatch in an email. “Recycling is never going to solve the plastic pollution crisis and companies like Coca-Cola, PepsiCo, Nestle, and Unilever need to stop misleading the public and stop touting it as a solution to the pollution crisis they helped create. The onus has been falsely put on consumers for too long — when in fact it is plastics companies, and the Big Oil companies standing behind them, that created this crisis. But consumers can use their voices to demand that these corporations change their wasteful ways and invest in systems of refill and reuse instead. They can also reach out to their elected officials to ask them to support both federal legislation and global treaties that will put a cap on plastic production.”

In the U.S., one such bill is the Break Free from Plastics Act, that would reduce the manufacturing and use of certain single-use plastics and make producers responsible for a plastic item throughout its lifecycle.

Editor’s note: This article was updated on November 15, 2022 to include the Association of Plastic Recycling’s response to the Greenpeace study.