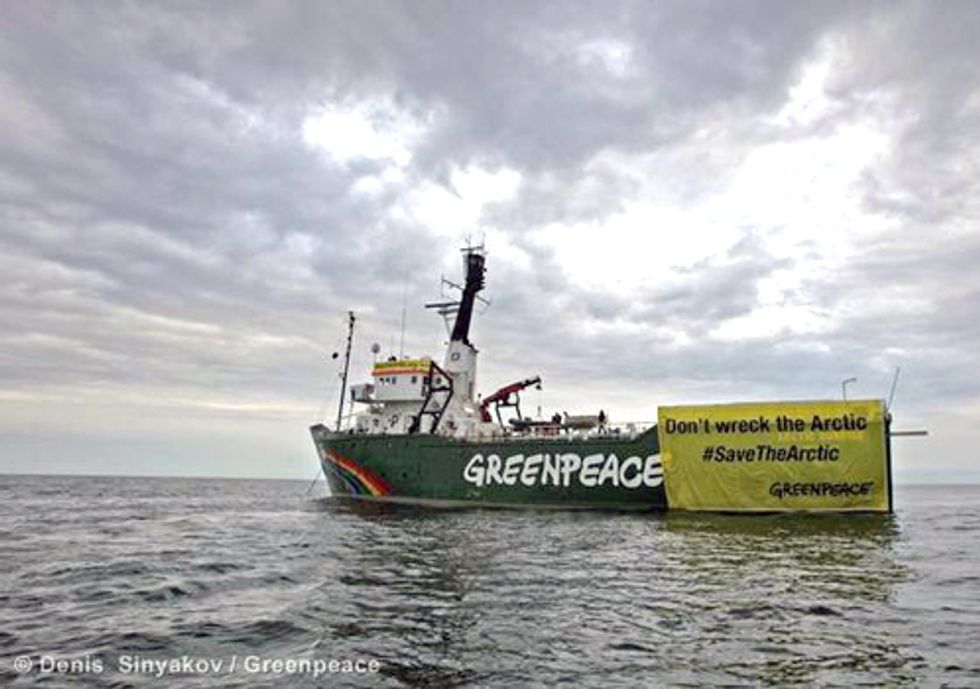 Just days after occupying Gazprom's Prirazlomnaya oil platform in the Pechora Sea, Greenpeace International is again taking peaceful action to stop the company from putting the final touches on its platform to begin Arctic oil drilling.

Greenpeace International Executive Director Kumi Naidoo and six other Greenpeace activists headed toward the platform early this morning in two high-speed boats to intercept the Anna Akhmatova passenger vessel as it prepared to drop off the workforce to the Prirazlomnaya. Two hours later, another two boats with seven more activists arrived on scene. There are now 14 activists in place from 10 different countries.

The activists have attached themselves to the anchor chain of the Anna Akhmatova and chained their boat to it, preventing the ship from lifting anchor and sailing to the platform to complete the work that will allow them to begin drilling in this fragile region.

A team of Greenpeace activists including the Executive Director of Greenpeace International Kumi Naidoo, attach themselves to the anchor chain of the Anna Akhmatova and chain their inflatable to it, preventing the ship from lifting anchor and sailing to the Prirazlomnaya oil platform to complete the work that will allow them to begin drilling in this fragile region.

The Prirazlomnaya has requested help from the Russian Coast Guard, who are on the scene, but have not yet intervened.

Speaking from the action, Naidoo said:

"Two days ago we scaled this oil platform to draw the world's attention to this environmental crime, before it becomes an environmental disaster zone. Today we're taking peaceful action in the heart of Arctic destruction to stop this platform from wrecking these pristine waters. Nearly two million people have already joined our campaign to protect this unique region and we will do all we can to keep it off limits to reckless oil companies looking to profit from its exploitation."

The Prirazlomnaya is the first permanent oil platform in the offshore Arctic and marks the creeping industrialization of this fragile area. The construction phase on the platform is nearly complete, and Gazprom is anxious to begin drilling and become the first oil company to commercially produce oil from the offshore Arctic.

Despite extreme operating conditions, Gazprom has only released a summary of its oil spill response plan to the public. Yet even this document shows that the company would be completely unprepared to deal with an accident in the Far North, and would rely on substandard clean-up methods, such as shovels and buckets, that simply do not work in icy conditions.

Today activists from 10 countries supported more than 1.5 million people from around the world by signing the Save the Arctic petition.

Watch the video from today's action: