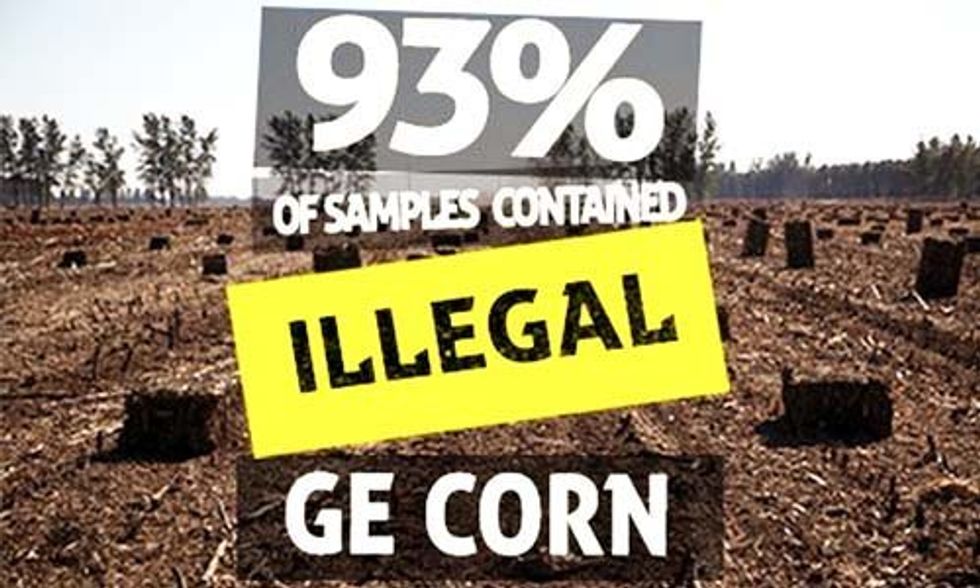 A Greenpeace East Asia investigation into corn production in Liaoning Province, one of China’s major breadbaskets, has found that 93 percent of random field samples and 20 of 21 samples from grain markets and supermarkets in the area tested positive for illegal genetically engineered (GE) contamination.

The commercial production of GE staple crops in China is strictly illegal. Greenpeace calls for an urgent investigation into this large scale GE contamination, for the implementation of measures to prevent its reoccurrence and for the reallocation of resources into promoting ecological agriculture as a solution to China’s food needs.

“The scale of GE contamination is truly shocking,” Li Yifang, head of food and agriculture campaign for Greenpeace, said. “China has strict and clear regulations on GE and the ongoing production of GE corn in Liaoning province breaks these regulations on multiple levels.”

The investigation was carried out from May to December 2015. A combination of rapid testing, sampling and laboratory testing by a third party was used. Samples were taken from five corn growing counties in Liaoning Province from the three main stages of corn production; agricultural seed supplies (supply), fields (production) and local grain silos, markets and supermarkets (distribution). All stages showed a high level of GE contamination. The patents of the discovered GE corn strains belong to international companies Monsanto, Syngenta, Du Pont Pioneer and Dow Chemical.

China’s strict GE regulations only permit the import of GE crops for use as raw materials. At present, no strains of GE corn are allowed to be commercially produced in China. Moreover, products containing imported GE crops must be labeled in order to ensure consumers’ right to know and right to choose. The production of illegal GE corn, which has most likely already entered the supply chain, is in direct violation of this right.

Greenpeace concludes that an extremely lax and disorganized seed market management system in China has allowed for the production and distribution of illegal GE corn.

“The government must immediately investigate the origins of this large scale GE contamination and implement measures to ensure that this never happens again,” Li Yifang said.

Greenpeace also calls on the government to establish a regular system of seed inspection before the sowing period each year and to establish a strict and comprehensive system to supervise research, breeding and cultivation of GE products. The government should exercise extreme caution in the commercialisation of any GE crops.

GE is not a solution to food security or safety. Greenpeace urges the Chinese government to shift resources to the promotion of ecological agriculture, a more sustainable and safe form of food production.