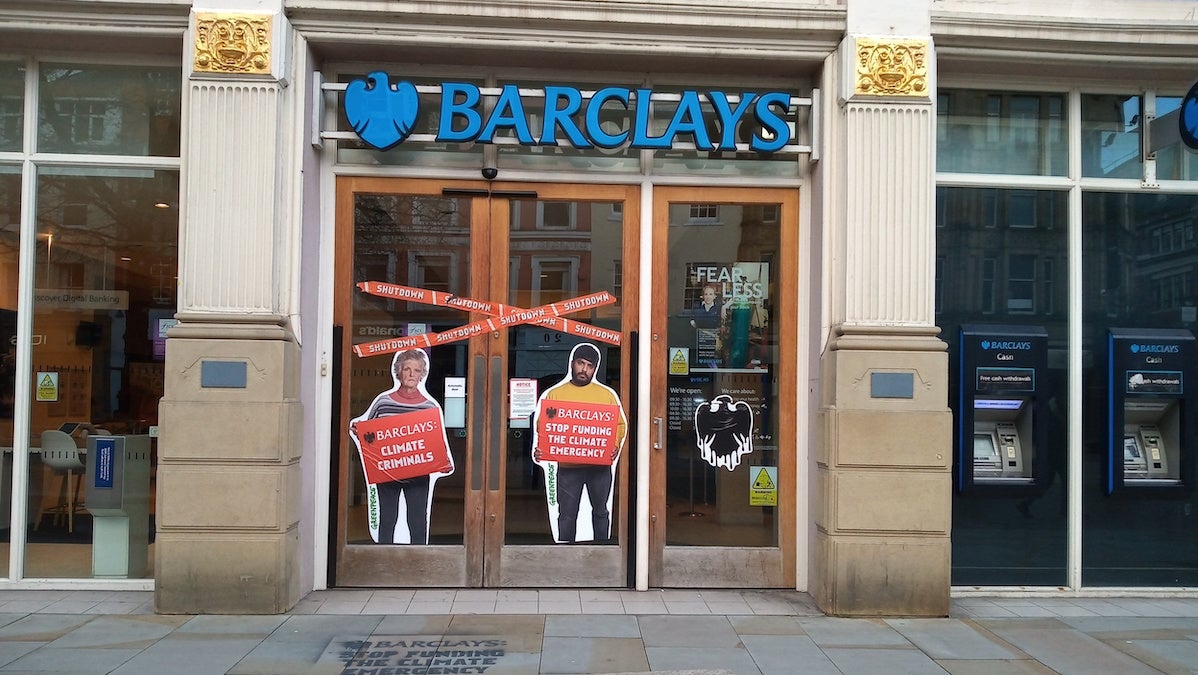 In a coordinated action to pressure Barclays to stop financing climate destruction, Greenpeace activists on Monday morning shut down 97 of the British investment bank’s branches across the United Kingdom.

“Barclays must stop funding the climate emergency; that’s why we’ve taken action today,” Morten Thaysen, climate finance campaigner at Greenpeace UK, said in a statement. “From floods to bushfires and record heat in Antarctica, the impacts of this crisis are staring us in the face. Yet Barclays keeps pumping billions into fossil fuel companies at exactly the time we need to stop backing these polluting businesses.”

“Banks are just as responsible for the climate emergency as the fossil fuel companies they fund, yet they’re escaped scrutiny for years,” Thaysen added. “We’ve shut down branches across the country to shine a spotlight on Barclays’ role in bankrolling this emergency. It’s time Barclays pulled the plug and backed away from funding fossil fuels for good.”

Activists across the country disabled the doors at Barclays branches and plastered the buildings with photos of campaigners holding signs that declared: “Stop funding the climate emergency,” “Climate criminals,” and “Stop funding fossil fuels.”

Thanks to our fantastic friends at @Peopleandplanet, who helped us take the #ClimateEmergency message to @Barclays branches across the UK today. https://t.co/mp127X8EcG

Greenpeace UK’s #BarclaysShutdown action was welcomed by fellow climate advocacy groups and activists who praised the group for fighting for a habitable planet:

Companies that imperil our planet & all our kids futures.

According to the Rainforest Action Network’s latest fossil fuel finance report card, published nearly a year ago, Barclays poured over billion into coal, oil and gas companies from 2016 to 2018, and was the sixth largest funder of the fossil fuel industry worldwide. Climate action campaigners and Barclays shareholders alike have urged the bank to phase out its support for dirty energy firms.

In a series of tweets Monday, Greenpeace UK showed the impacts of the human-caused climate crisis and pointed out Barclays’ role in funding fossil fuel companies that significantly contribute to global heating:

Millions of customers trust @Barclays with their money & their future – but the truth is we can’t trust them with our planet.

The choice is clear: fund a better future for your customers, or bankroll climate breakdown. #FossilFuelBank
[2/3] pic.twitter.com/gZdTnRHtdk

In response to Monday’s protests, a Barclays spokesperson told BBC News that “we recognize that climate change is one of the greatest challenges facing the world today, and are determined to do all we can to support the transition to a low carbon economy, while also ensuring that global energy needs continue to be met.”

“Greenpeace has a view on these issues to which they are completely entitled, but we would ask that — in expressing that view — they stop short of behavior which targets our customers, and our colleagues, going about their lives in communities around the country,” the bank spokesperson added.

Although some Barclays customers were reportedly frustrated with Greenpeace’s action, some Twitter users who self-identified as bank customers turned to social media to express support for the group’s decision to shut down bank branches, given the scale of the threat posed by the climate emergency.

“As an ‘old dear’ I am content for the minor inconvenience of temporarily losing access to a bank that invests in the destruction of my grandchildren’s and their grandchildren’s future. Well done, Greenpeace,” tweeted Dianne Woodward, a scientist and educator.

Verity Pabla, founder of the music company I’m Not a Machine, directed her tweet at the bank, writing: “I’m a new Barclays customer, and I fully support this action by Greenpeace U.K. It’s time to shape up your business with immediate effect. Stop funding fossil fuel companies.”

The action also won support from Alan Watson Featherstone, an ecologist, nature photographer and founder of the conservation charity Trees for Life, which aims to restore the Caledonian Forest in Scotland:

I've just tweeted about this, & encourage everyone to do the same, to put some real pressure on Barclays, and to support Greenpeace in this latest campaign to reduce the use of fossil fuels. Good to see lost of branches in Scotland have been targeted. #BarclaysShutDown https://t.co/wN1x2NuYh1

American author and activist Bill McKibben responded on Twitter to the Barclays action, highlighting upcoming protests to pressure the U.S. investment bank JPMorgan Chase, the biggest funder of fossil fuels, to divest from projects wrecking the planet. The actions planned for April 23 are part of the Stop the Money Pipeline campaign launched in January by multiple advocacy groups, including Greenpeace USA and 350.org, which McKibben co-founded.

JPMorgan is a top target of the campaign, which has also set its sights on asset managers and insurance companies. Although JPMorgan announced last week that the bank will stop funding certain fossil fuel extraction projects, McKibben confirmed that it will still “retain the title of the doomsday bank” and face demonstrations by climate activists next month.