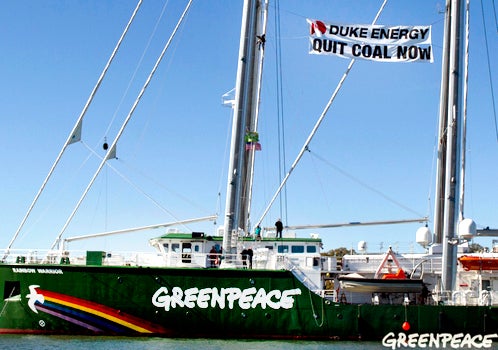 Greenpeace USA Executive Director Phil Radford announced a campaign on Feb. 14 to make Duke Energy the clean energy company that North Carolina and the U.S. deserve. The announcement follows a protest and demonstration Feb. 13 in which 16 Greenpeace activists were arrested at a Progress Energy coal plant in Asheville, N.C. after unfurling a huge banner atop a smoke stack that read “Duke Energy: the climate needs real Progress.” Duke Energy and Progress Energy are seeking a merger which would create the largest utility company in the U.S.

“We must shine a light on Duke’s activities in 2012 because this is a make or break year for the climate, and Duke is at the center of it. The merger alone is enough to warrant an extra level of scrutiny—and has in fact been delayed this far by FERC (The Federal Energy Regulatory Commission) because of concerns about the company holding an energy monopoly in North Carolina. North Carolina ratepayers don’t have a choice about where they get their energy. Despite a committed local movement opposing the most recent rate hike, they’re seeing a 7.2 percent increase on their electricity bills in March, not to pay for an investment in renewable energy, but to invest more in new coal projects like the Cliffside plant. Enough is enough—Duke ratepayers have said loudly and clearly that they don’t want to pay for more investments in dirty energy.

“And Duke Energy also holds a unique position in energy politics right now. It is currently the third largest emitter of CO2 in the U.S.—and that’s before it takes on Progress Energy’s dirty fleet. CEO Jim Rogers has spoken openly about the threat of climate change and pollution controls for coal plants, and yet Duke holds a membership in the industry group ERCC (Electric Reliability Coordinating Council), a group that was aggressively lobbying against the recently passed Mercury Rule.  It’s no secret that Duke’s money and influence—$6.5 million in lobbying dollars in 2010—could have a significant impact in U.S. energy policy. To top it all off, this year, Rogers has been the lead fundraiser for the Democratic National Convention, to be held in Charlotte where Duke Energy is based, lending the Democrats $10 million dollars to pay for the convention.

“On 60 Minutes in 2009, Jim Rogers said, “I remember the first time I took a helicopter to look down at a power plant like this, I was 41 years old, and I said, ‘Oh my goodness, I’m responsible for that?'” He is. As long as Rogers guides the decisions of Duke Energy, he’s responsible for dozens of polluting plants around the country that compromise our children’s health and the health of our climate, and the mountains that are blown up to mine the coal he burns in these plants. He’s responsible for the 15,714 asthma attacks, 1,447 heart attack, and 951 premature deaths Duke’s coal plants cause every year. And Duke is soon to be responsible for Progress’s fleet and the pollution that comes with it.

“Our communities and our climate can’t wait any longer for real action on the climate.”