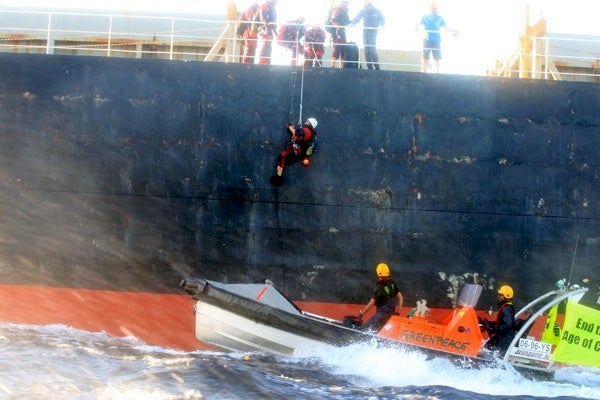 At sunrise, the six activists left the Rainbow Warrior on inflatable boats and drew up alongside the MV Meister, a ship carrying thermal coal loaded at Abbot point in Queensland. Using steel ladders, they climbed the side of the ship and 18 hours later remain on the vessel.

Greenpeace boarded the ship just after it left the Great Barrier Reef World Heritage Area. The six activists come from five countries in the Asia Pacific region where Greenpeace is campaigning to end the age of coal: Australia, India, U.S., China and New Zealand.

Australia’s coal exports are the nation’s greatest contribution to climate change and plans are underway to roughly double the volume of exported coal. Yet every ton of coal that is exported will return as climate change: bushfires, heatwaves and drought.

“Our scientists and political leaders have all said climate change is a problem that we must address now,” said Greenpeace Senior Climate Campaigner Dr Georgina Woods, “yet our coal exports continue to grow.”

U.S. activist Harmony Lambert, joined the action to highlight the global nature of both the industry and the threat, saying: “The coal industry has directly impacted communities in the U.S. through mountaintop removal, coal pollution and dangerous waste storage sites, but the burning of coal is not just a local issue.” 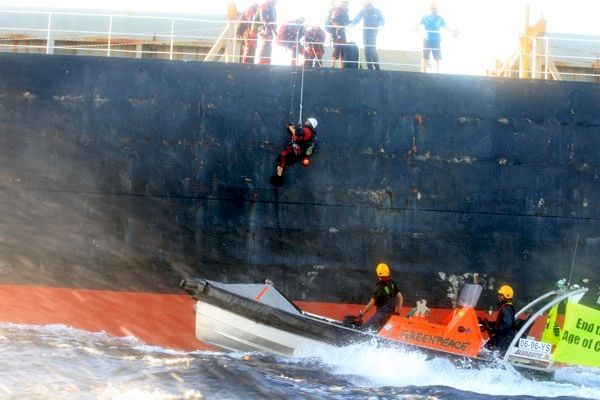 “Coal is the largest contributor to climate change around the world—both the U.S. and Australia need to stop exports of this dangerous commodity,” said Lambert.

Greenpeace has tried every available means to stop the expansion of dangerous coal exports. One new coal terminal is under construction in the Great Barrier Reef World Heritage Area; another was approved in October last year, and a third is seeking approval now.

“In the clear absence of political leadership to address this problem, Greenpeace is stepping in to take immediate and peaceful action. Australia’s coal export boom cannot be allowed to continue,” said Dr. Woods.

According to research commissioned by Greenpeace, Australia’s coal export expansion is the second biggest of 14 proposed fossil fuel enterprises that will push the world beyond agreed global warming limits.

“We cannot pretend Australia is playing its part to avoid dangerous climate change if these shipments continue,” said Dr. Woods. 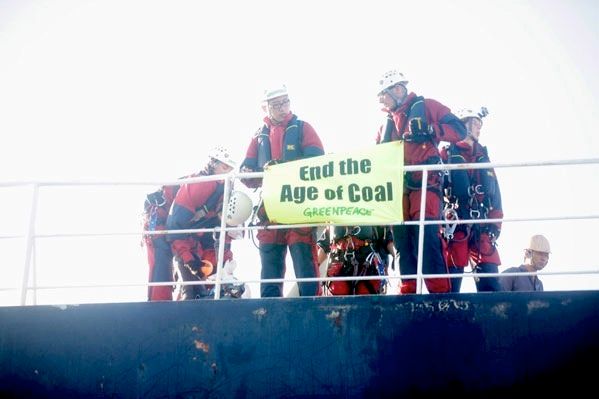 The coal export expansion planned for Queensland would threaten the Great Barrier Reef through dredging, coastal constructions and increased shipping. Moreover, coral reefs around the world are unlikely to survive if global temperatures increase by 1.5 degrees.

“Right now, we’re heading decisively for four degrees of warming,” said Dr. Woods. “If we want to save the Great Barrier Reef, it’s time to end the of age of coal.”