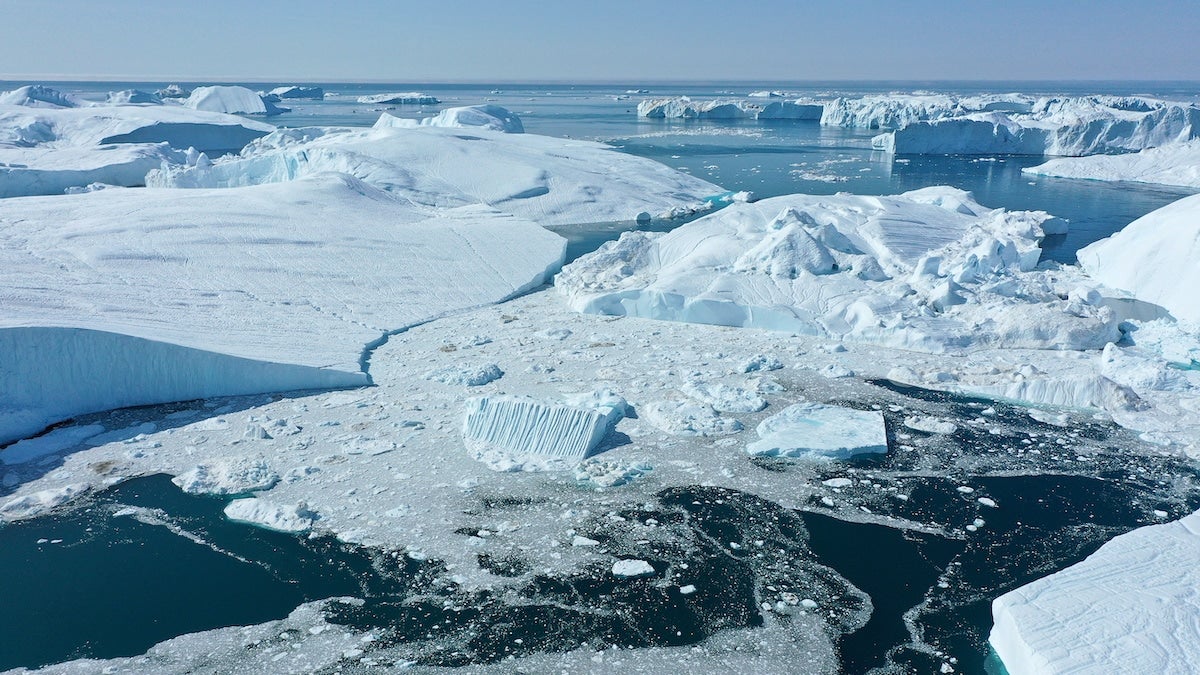 Icebergs float at the mouth of the Ilulissat Icefjord during a week of unseasonably warm weather on Aug. 4, 2019 near Ilulissat, Greenland. Sean Gallup /Getty Images

The study, Rate of mass loss from the Greenland Ice Sheet will exceed Holocene values this century, found that while Greenland is losing ice rapidly now, the worst is yet to come. At its current trajectory, the Greenland ice sheet will lose its ice mass roughly four times faster than at anytime in the last 11,700 years. The researchers say the massive dump of freshwater into the ocean will disrupt the ocean’s currents and raise sea levels, as The Washington Post reported.

Advanced prediction models had led scientists to conclude that Greenland’s melting ice, which is currently the largest contributor to sea level rise, is raising sea levels by 0.7 millimeters each year. And, by the end of the century, that number could increase anywhere from four to ten times its current contribution.

This new paper found that prediction to be a severe underestimation. It revised that prediction and accounted for a wide range of greenhouse gas emissions to conclude that Greenland’s contribution to sea level rise will actually be much worse. By the end of the century, it will lift sea levels between 2 to 10 centimeters every year, according to a commentary in Nature.

The Washington Post noted that while Greenland is the largest contributor to rising sea levels, the melting ice sheets in Antarctica may raise sea levels even more.

“We have altered our planet so much that the rates of ice sheet melt this century are on pace to be greater than anything we have seen under natural variability of the ice sheet over the past 12,000 years,” said Jason Briner, a geologist at the University of Buffalo and lead author of the paper, as The Guardian reported.

Briner pointed out that the current ice melt is not due to the natural variability, which is why it is so different from historical patterns. This melting is strictly man-made, which is unprecedented in the history of the world, as CNN reported.

The commentary in Nature, written by Andy Aschwanden from the Geophysical Institute at the University of Alaska Fairbanks, noted that there is really only one way available to us to stop the acceleration of sea ice loss from Greenland.

“Thanks to the work of Briner and colleagues, we are now one step closer to the goal of accurately and confidently predicting mass loss from the Greenland ice sheet,” Aschwanden concluded. “However, we are also increasingly certain that we are about to experience unprecedented rates of ice loss from Greenland, unless greenhouse-gas emissions are substantially reduced.”

To conduct the research, the scientists used a combination of on-the-ground observations in southwest Greenland and advanced computer modeling. The geologists looked at the composition of Greenland’s boulders to determine when ice was there and when it melted away. That analysis allowed them to put together an uninterrupted history of Greenland’s ice sheet and a predictive model for the next century, as The Washington Post reported.