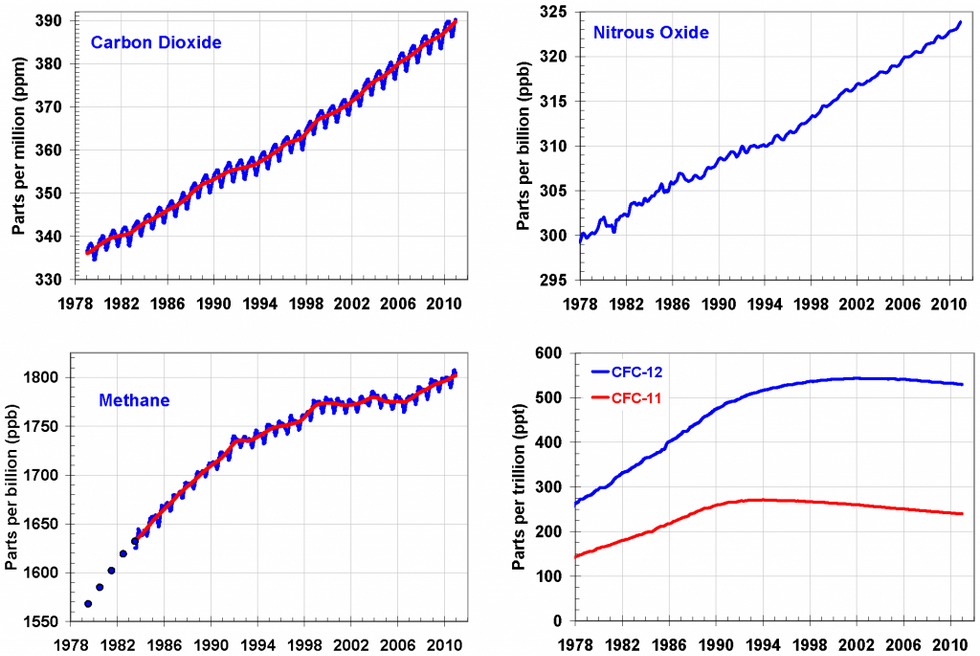 This week I'm reviewing the year’s social, environmental and economic events that have impacted human health and the environment. Today, I am reviewing the updated National Oceanic and Atmospheric Administration’s (NOAA) Annual Greenhouse Gas Index (AGGI).

In November, NOAA's AGGI, which measures the direct climate influence of many greenhouse gases such as carbon dioxide and methane, showed a continued steady upward trend that began with the Industrial Revolution of the 1880s.

According to NOAA, the AGGI reached 1.29 in 2010, meaning that the combined heating effect of long-lived greenhouse gases added to the atmosphere by human activities has increased by 29 percent since 1990, the “index” year used as a baseline for comparison. This is slightly higher than the 2009 AGGI, which was 1.27.

Global average abundances of the major, well-mixed, long-lived greenhouse gases - carbon dioxide, methane, nitrous oxide, CFC-12 and CFC-11 - from the NOAA global air sampling network are plotted since the beginning of 1979. These gases account for about 96% of the direct radiative forcing by long-lived greenhouse gases since 1750. The remaining 4% is contributed by an assortment of 15 minor halogenated gases (see text). Methane data before 1983 are annual averages from Etheridge et al. (1998), adjusted to the NOAA calibration scale [Dlugokencky et al., 2005.

“The increasing amounts of long-lived greenhouse gases in our atmosphere indicate that climate change is an issue society will be dealing with for a long time,” said Jim Butler, director of the Global Monitoring Division of NOAA’s Earth System Research Laboratory in Boulder, Colorado. “Climate warming has the potential to affect most aspects of society, including water supplies, agriculture, ecosystems and economies.”

Here's a YouTube video of Butler explaining the annual AGGI. He shares his concerns about the steady emissions of greenhouse gasses into the atmosphere by human activities and explains that in records that reach back 800 thousand years, we have never seen carbon dioxide levels anywhere near what they are today—more than 390 parts per million (ppm). In fact, it's only in the last 100 years that we have seen CO2 exceed 290 ppm.

If you're familiar with the organization 350.org, founded by author and activist Bill McKibben, you understand the significance of exceeding 350 ppm. 350.org's mission is based on reducing the amount of CO2 in the atmosphere from its current level of 392 ppm to below 350 ppm, the number scientists say we need to achieve to preserve our planet.

According to Butler, the AGGI is analogous to the dial on an electric blanket—that dial does not tell you exactly how hot you will get, nor does the AGGI predict a specific temperature. Yet just as turning the dial up increases the heat of an electric blanket, a rise in the AGGI means greater greenhouse warming.

NOAA scientists created the AGGI recognizing that carbon dioxide is not the only greenhouse gas affecting the balance of heat in the atmosphere. Many other long-lived gases also contribute to warming, although not currently as much as carbon dioxide.

The AGGI includes methane and nitrous oxide, for example, greenhouse gases that are emitted by human activities and also have natural sources and sinks. It also includes several chemicals known to deplete Earth’s protective ozone layer, which are also active as greenhouse gases. The 2010 AGGI reflects several changes in the concentration of these gases, including: