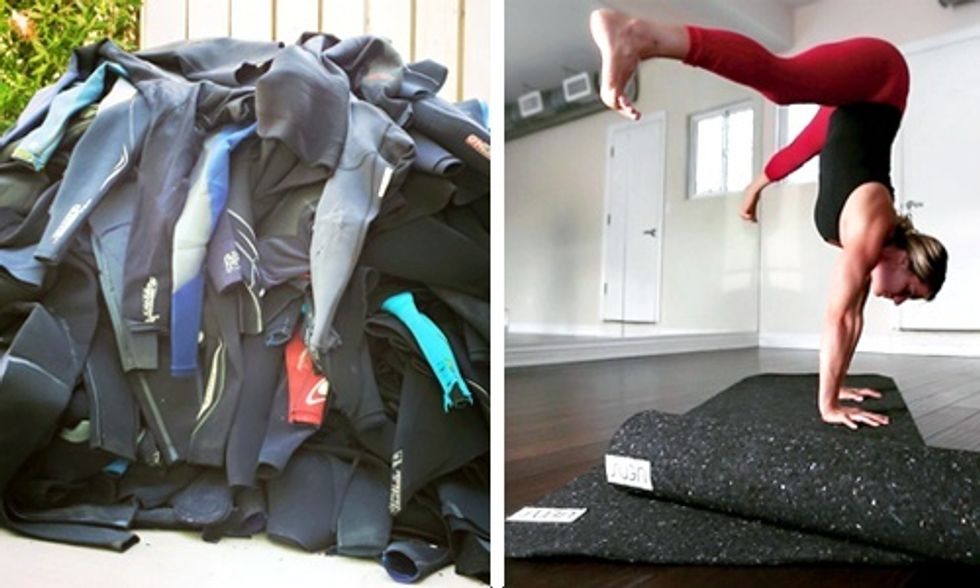 Süga is a company that manufactures yoga mats made in the USA from 100 percent recycled wetsuits. The name Süga "evokes the two worlds it straddles: surfing and yoga," explains founder Brian Shields, whose a surfer and a yogi.

Surfers enjoy a bond with the environment, says Shields but "we struggle to reduce our impact." He wanted to turn these non-biodegradable wetsuits, which would otherwise end up in the landfill, into "highly functional instruments of yogic bliss," as he puts it.

Yoga mats are often made with chemicals that can be hazardous to your human health. Azodicarbonamide is one such chemical, which, strangely enough, use to be used in the bread of the fast-food chain Subway until last year. Polyvinyl chloride (PVC) and other questionable materials including phthalates, lead and cadmium, have found their way into standard yoga mats, as well.

Since Süga mats are made from neoprene, they're naturally a "closed-cell foam," says Shields, so they don't "sponge up" bacteria, sweat, dust and dirt from yoga studio floors like other mats. Neoprene does, however, contain dialkyl thioureas, which has been linked to allergic contact dermatitis.

"The SügaMat has undergone significant R&D and beta-testing prior to being unleashed on yogis worldwide," says Süga. "Although our mats are made from recycled wetsuits, they perform better than any mat on the market. We have built them to specific tolerances of density, tackiness (both wet and dry), elasticity, durability, and liquid permeability and retention. We are confident that you'll dig every asana on your SügaMat."

The project is currently raising money on Kickstarter and has raised half of its goal of $20,000 to date. Large-scale production will begin in January.

If you donate $69 to the Kickstarter campaign, you'll receive a SügaMat. And if you donate $89, you'll receive a Cradle2Grave SügaMat—that is, one with a lifetime guarantee. If anything happens to your mat, you can return it to Süga and they will send you a new one for free. They're also asking anyone with an old wetsuit to donate it, so they can turn it into a yoga mat. In exchange for the donation, you will get a 10 percent discount on a mat.

Modoc County lies in the far northeast corner of California, and most of its 10,000 residents rely on cattle herding, logging, or government jobs for employment. Rodeos and 4-H programs fill most families' calendars; massive belt buckles, blue jeans, and cowboy hats are common attire. Modoc's niche brand of American individualism stems from a free-spirited cowboy culture that imbues the local ranching conflict with wild horses.