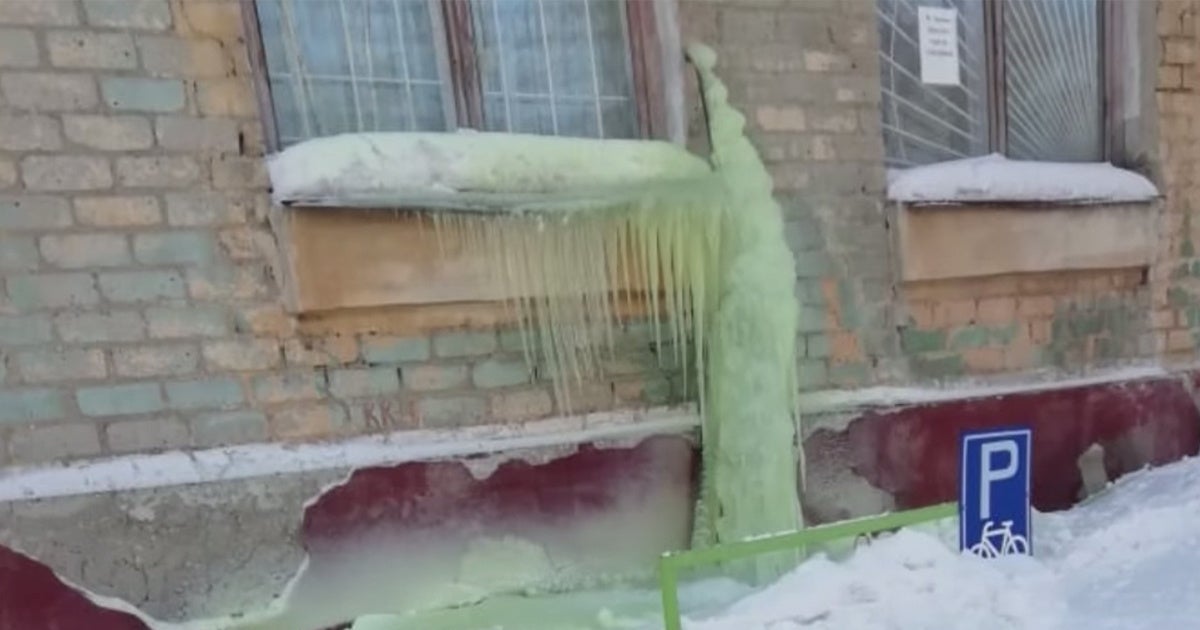 Pollution is turning the snow green in the Russian city of Pervouralsk, the latest in a series of incidents fueling growing concerns about the environmental health of the country that could threaten President Vladimir Putin’s popularity, The Independent reported Monday.

One video shared by ND News Feb. 15 shows a patch of green snow outside a pre-school close to a local chrome plant that residents blame for the phenomenon.

“The children got sick, they had a cough and their skin turned red, with rashes on their faces,” resident Natalya Solovey, who shot the video, told ND News, as Euronews reported.

Pictures have also shown acid green icicles hanging from buildings, according to The Independent.

The chrome factory denied that their activities posed any risk to residents, according to a statement from spokesman Vsevolod Oreshkin shared by The Independent:

“It’s a routine situation for residents that should not cause alarm. Does not threaten lives or health of adults and children. It’s Pervouralsk. There are a whole variety of industrial enterprises here. If we take samples of snow in any place we will see a multitude of dangerous substances.”

However, a number of incidents outlined in The Independent indicate that Russian citizens are getting tired of accepting pollution as a fact of life.

1. Black Snow: Residents in the coal-mining region of Siberia have been posting videos on social media this month of mountains of black snow. The Kuzbass region, where some of the videos were filmed, has higher than national rates of cancer, tuberculosis and childhood cerebral palsy, and a life expectancy three to four years below the national average, The Guardian reported.

“It’s harder to find white snow than black snow during the winter,” Ecodefense member Vladimir Slivyak said, as The Guardian reported. “There is a lot of coal dust in the air all the time. When snow falls, it just becomes visible. You can’t see it the rest of the year, but it is still there.”

2. Sibai Smog: The town of Sibai in the Urals has been choking on smog since November, and residents have decided to sue a local copper mine, The Moscow Times reported Feb. 20.

“Some Sibai residents have begun to directly appeal to the courts with demands that the Uchalinsky ore processing plant compensate the damage done to their health,” Governor of the Republic of Bashkortostan Rady Khabirov told the state-run RIA Novosti agency, as reported by The Moscow Times.

Sibai, Russia, has been enveloped since November in thick smog from underground fires at a copper-zinc mine. The SO2 concentration is way above safe levels. Instead of helping, the mayor called residents "excrement" after they appealed to Putin. Now they're trying to sue the mine pic.twitter.com/BxQGeRcluG

3. Nationwide Protests: In early February, thousands took to the streets across Russia to protest plans by Moscow to dump overflowing trash in surrounding regions, The Moscow Times reported. The protest, called “Russia is Not a Dump,” attracted the participation of 26 regions, according to organizers.

“The authorities have excluded us from the entire process and haven’t answered any of our questions,” protest organizer and local deputy Ilya Sviridov told The Moscow Times. “We are simply demanding dialogue.”