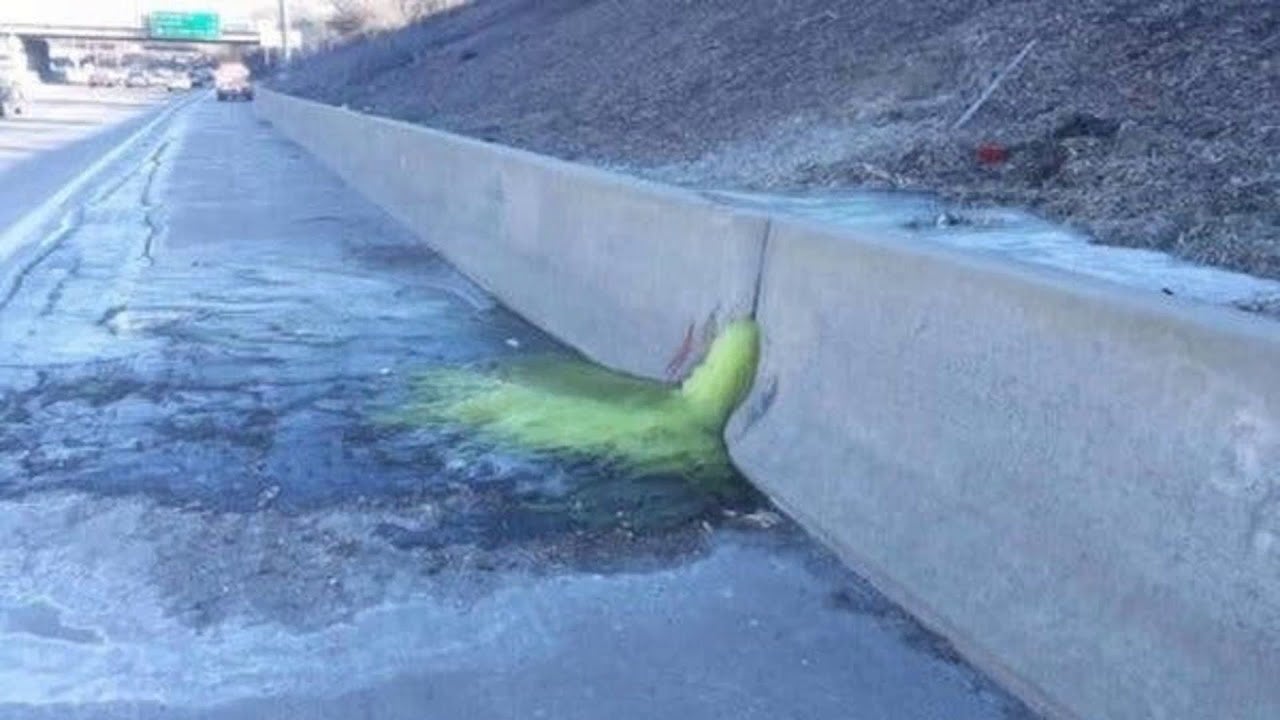 Motorists traveling on Interstate 696 in Michigan caught a peculiar sight on Friday when a mysterious green slime oozed onto the highway from a retaining wall, according to The New York Times.

Authorities blocked sections of the highway in Madison Park, a Detroit suburb, while hazardous material cleanup crews worked to contain and remove the material. The Michigan state police tweeted on Saturday that the green slime was the cancer-causing chemical hexavalent chromium, which was leaking from the basement of a local business, as CNN reported.

“It’s a serious situation,” said Jill A. Greenberg, a spokeswoman for the Michigan Department of Environment, Great Lakes, and Energy on Sunday, as The New York Times reported. “Clearly, this site needs to be cleaned up.”

However, she added that cleanup crews seem to have the situation under control and she said there is no imminent threat of air or drinking water contamination. The contaminated water is migrating underground and working its way to the freeway, she said, as the Detroit Free Press reported.

Hexavelent chromium is the cancer-causing manufacturing compound that the Pacific Gas and Electric Company was accused of leaking and contaminating drinking water with in southern California. That story was made famous by the 2000 movie Erin Brokovich. The chemical is usually made during industrial processes like plating and is a known carcinogen, according to the Occupational Safety and Health Administration. Hexavalent chromium damages the respiratory system, kidneys, liver, skin and eyes, as CNN reported.

The chemical was traced back to a pit in the basement of the local business, Electro-Plating Services Inc. whose owner was previously convicted of illegally storing dangerous chemicals in leaky containers, according to the Detroit Free Press. The chemical leaked down into the ground and found its way into a drain that emptied onto the eastbound side of the interstate. If the liquid had not been discovered, it could have ended up in Lake St. Clair, said Candice Miller, Macomb County public works commissioner, as CNN reported.

“The Environmental Protection Agency (EPA) indicated that once the chemical came up thru the drain, it froze into a yellow blob,” police tweeted, as CNN reported. “The plan to dispose of the chemical is to bring in a type of excavator, scoop up the frozen waste, and place it into a safe container.”

Cleanup crews were using a sump pump on Sunday to remove the hexavalent chromium from the pit, according The New York Times. “We have cleaned out the sewers and the clean out drains between the facility and 696,” said Greenberg, as CNN reported. “We’re also in the process of cleaning up the basement of the facility.”

The EPA teamed up with local authorities to determine that the liquid likely was groundwater contaminated with hexavalent chromium. Sample results from the site are expected this week, Greenberg said, as the Detroit Free Press reported.

“We are operating under the presumption that this is groundwater contaminated with chromium from historic plating operations,” Greenberg said in a statement.

State authorities shut down Electro-Plating Services Inc. in 2016 “for [the] imminent and substantial threat due to the mismanagement of hazardous waste,” as Fox News reported. It was then designated it a Superfund cleanup site. The company’s owner, Gary A. Sayers, pleaded guilty earlier this year to storing hazardous waste illegally, as The New York Times reported. Sayers was sentenced to one year in prison and fined .5 million for the cleanup.

The police announced that parts of the highway would remain closed for the weekend and asked drivers to be careful.

“Please use caution as there will be workers in the area. And a yellow blob,” police said.