What Are Green Skyscrapers? 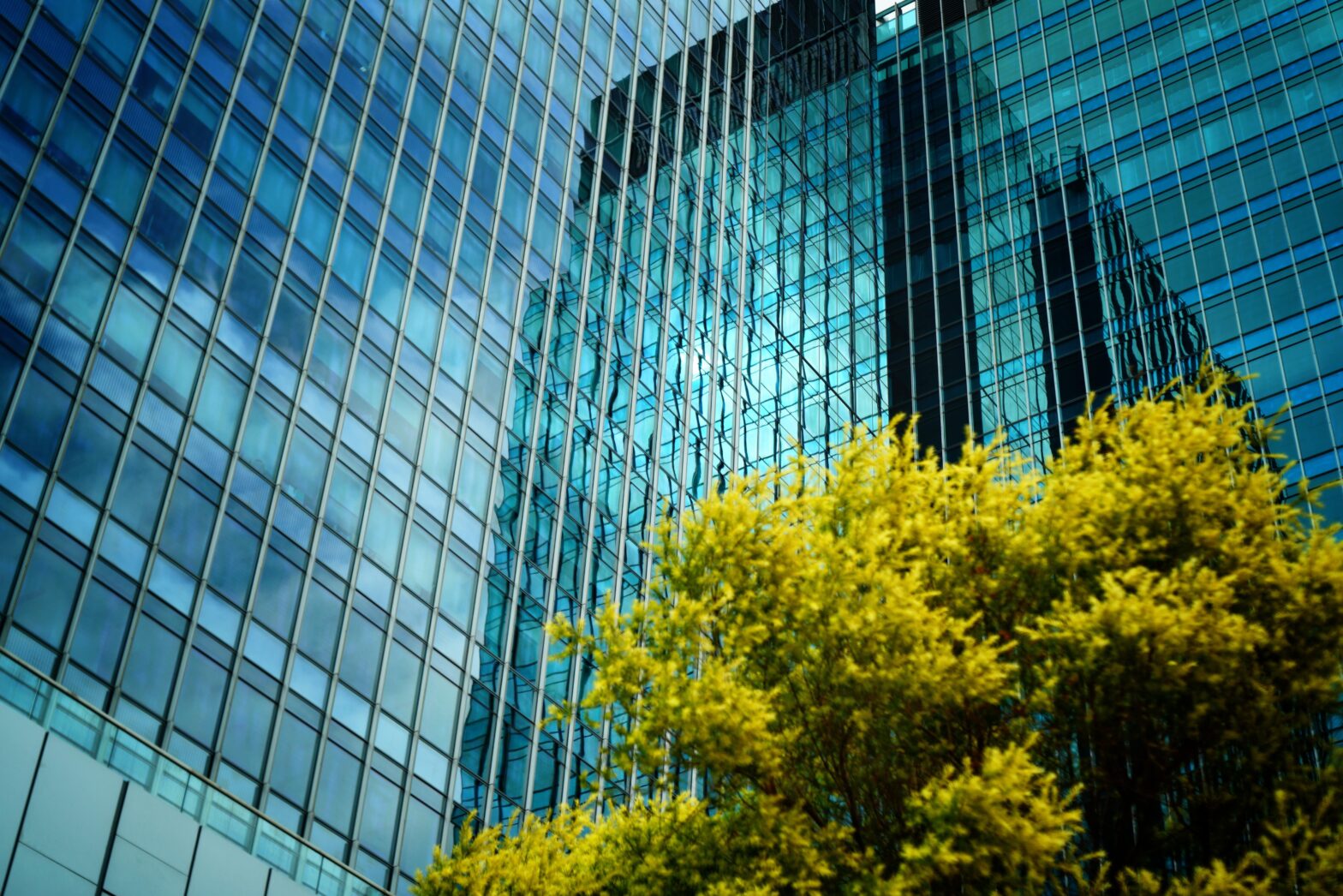 Few structures are as synonymous with modern civilization as the skyscraper. The grandeur of these tall structures comes at a cost—buildings account for close to 40 percent of the world’s greenhouse gas emissions.

While our tallest buildings take a heavy toll on the environment, they also offer opportunities for improvement. Today, green skyscrapers are transforming how cities worldwide address their ecological footprint. In many ways, they show our collective capability to adjust modern life for a more sustainable future. Here’s a closer look at what makes a “green skyscraper” and why that matters in the world today.

What Makes a Skyscraper Green?

Skyscrapers are typically defined as buildings with multiple levels that reach at least 100-150 meters tall (usually with a minimum of 40-50 stories).

At first glance, “green” and “skyscraper” seem like an oxymoron. These gargantuan glass-sided buildings require immense amounts of resources for both construction and daily operation. The environmental cost of keeping them comfortable is significant alone, as air conditioning accounts for 14 percent of global energy use.

Green skyscrapers, in contrast, make environmental sustainability a defining priority. There’s no set standard for what makes skyscrapers green, but rather dozens of steps architects and building managers can take to make the structure as resource-efficient as possible.

In this way, green skyscrapers utilize sustainable design, construction, and operation principles to produce a better indoor space for both people and the broader world.

Many generate their own renewable energy through solar panels or wind turbines, while others focus on reducing water usage with ultra-efficient fixtures. Some even transform the building’s exterior into a verdant green space filled with plants that pull in CO2 from the air and convert it into oxygen.

Considering how resource-intensive skyscrapers are to begin with, is attempting to make them more eco-friendly a waste of effort? After all, it will always take tremendous amounts of energy to get hot water up 80 stories to a penthouse apartment. Some may argue society’s time would be better spent investing in smaller-scale structures instead.

However, comparing a green skyscraper to other forms of green buildings is flawed logic. Living in an environmentally efficient single-family home may be a sustainable choice, but only at the scale of the individual. When it comes to housing millions of people, a city of skyscrapers wins out over smaller dwellings.

That’s because skyscrapers offer some of the most energy-efficient spaces in cities by concentrating people and resources in one place. Not only does this reduce transportation distances and encourage people to walk or take public transit instead of drive, but it slows down suburban sprawl and keeps untouched land out of development.

What are the Benefits of Green Skyscrapers?

Far beyond generating positive press for their architects, green skyscrapers offer real benefits for humans and the natural world. Here’s what they offer.

Skyscrapers typically exist in places with minimal greenspace. An emerging trend is to bring the natural world back to the city by creating vertical forests on the sides of buildings. Today, some structures are home to hundreds of plant species that grow along the exterior, supporting biodiversity by providing homes for birds and insects.

Buildings generate a disproportionate amount of the world’s greenhouse gasses, and sustainable construction and operation can reduce emissions considerably. The UNEP Sustainable Buildings and Climate Initiative predicts that the building sector has the potential to more than halve these emissions in skyscrapers by 2050 through greater energy efficiency and the switch to renewable energy.

Living or working in a green skyscraper can reduce your personal energy expenditure. One Chicago-based study found that those living in suburban areas close to commuter rail lines and the subway system used 27 percent more energy per person than those who lived in green architecture high-rise buildings in a walkable downtown environment.

Reduces Need for Heating and Cooling

The EPA states that heating and cooling accounts for over 43 percent of all energy use in America, which makes maintaining comfortable temperatures in indoor spaces a serious cause of climate change.

By utilizing more energy-efficient windows, optimizing cooling systems, and even planting shade plants along the exterior and around windows, green skyscrapers can bring their heating and air conditioning use down to a minimum.

Living and working in green buildings can have real impacts on your health, thanks to better air quality. Research shows that green buildings reduce asthma, respiratory allergies, stress, and even depression among employees and lead to improvements in productivity.

Further data indicates that better indoor air quality can lead to performance improvements up to eight percent and that workers in well-ventilated apartments received better scores on cognitive tests.

Building a green skyscraper might cost more upfront, but the sustainability measures usually pay for themselves.

LEED-certified buildings tend to achieve 20 percent lower maintenance costs than comparable buildings. These green retrofits usually decrease operating costs by ten percent each year and pay for themselves within seven.

Less Use of Natural Resources

Green buildings are efficient by design. This means they use less water, energy, and other resources than comparable buildings.

These savings add up fast, as buildings account for 12 percent of the total water consumed in the United States. Research shows that LEED-certified facilities use 25 percent less energy on average and divert more than 80 million tons of waste from landfills every year.

Are Green Skyscrapers Too Good To Be True?

Despite these benefits, green skyscrapers aren’t a panacea for our planet’s environmental crisis. Even the best-designed structures today still have drawbacks.

To start, clusters of tall towers produce enormous shadows that shade out the streets below and trap heat and pollution at ground level. Not only does this reduce the quality of life for those living below the top suites, but it can increase the amount of air conditioning and electric lighting used at lower levels.

Likewise, some reports indicate that green building certifications aren’t as stellar as they seem. For example, many argue that LEED criteria over-emphasizes construction choices and fails to fully account for how a building is used in the long run. This can reward flashier projects without putting the spotlight on the structures that make more of a difference for the planet on a day-to-day basis.

Even so, the benefits of learning how to make skyscrapers green seem to far outweigh the drawbacks, and they remain a smart solution for building more sustainable cities.

Globally, green skyscrapers are taking off. Here’s a closer look at some of the standout sustainable structures around the world today.

In past decades, China wouldn’t come to mind as an emblem of sustainability. The country burns close to half the world’s coal supply and is home to some of the most polluted air on the planet. By some estimates, it kills up to 4,000 citizens a day.

Today, the country is transforming this legacy and constructing some of the world’s greenest skyscrapers.

The International Commerce Centre in Hong Kong is one worthy of attention. Constructed in 2010, the 108-story tall structure has LEED gold certification, earning it a place in the top 3 percent of green buildings worldwide.

The building boasts a network of sensors that wirelessly monitor the building’s lighting, elevators, air conditioning units, and more to provide massive amounts of data for optimizing its energy use in real-time. This makes it possible to shut down unused facilities at a moment’s notice to prevent any unnecessary energy expenditures.

From a construction standpoint, the ICC is oriented to maximize natural light retention while minimizing solar heat gain and lowering noise levels for occupants. By some estimates, the green building tower has conserved 15 million kWh of energy since 2012, equivalent to the annual electricity consumption of 4,500 three-member households in China.

The Jin Mao Tower of Shanghai is another green skyscraper that’s achieved LEED Gold certification. It has committed to reusing or recycling at least 70 percent of all the waste generated over its 88 stories. Likewise, the Kingkey 100 Tower of Shenzhen reclaims its resource use by halving the amount of wastewater it generates and by using 100 percent of its used potable water for landscaping.

Not to be forgotten is the Shanghai Tower, which boasts being both the tallest building in China (the second tallest worldwide) and of achieving LEED Platinum status, the highest green building certification level possible.

Perhaps no building better emulates the ideal of a green skyscraper than the Bosco Verticale of Milan. Translating to “vertical forest” in Italian, these twin buildings’ exteriors are home to more than 800 trees and 14,000 plants growing along their balconies to create a vertical forest.

Not only are these plants beautiful to look at, but they consume carbon dioxide and release oxygen in its place while acting as a natural temperature regulator and noise buffer for those within the building. In total, the skyscrapers provide ten times the plant habitat space that would be possible at ground level.

Today, the Bosco Verticale is fast becoming the poster child for green buildings and has inspired numerous imitations worldwide.

Beyond better resource use, some of the most significant potential for sustainable skyscrapers is through food production.

As things stand now, the world’s farmers have over seven billion mouths to feed. The UN estimates that the planet’s population will approach ten billion by 2050, close to 80 percent of whom will live in urban areas. To keep up with these caloric needs, global food production must increase by an estimated 70 percent.

One way to meet this deficit is by growing food where the people are—in the middle of cities. Vertical farming is the practice of growing food indoors in vertically stacked layers, rather than in fields. Most utilize a hydroponic system where plants grow soil-less and within a continuously circulating nutrient-rich water.

The goal is to grow as much food as possible within a small space, ideally keeping it close to the people who will consume it. This eliminates the risk that erratic weather poses for traditional farmers, makes it possible to grow out of season, and can reduce fuel use for transportation.

However, vertical farms are costly to develop and don’t account for some agriculture factors like pollination. Likewise, the food they produce requires 24/7 access to technology—an unexpected power outage can spell disaster.

Despite these drawbacks, the vertical farming industry is starting to take off in the United States. Many skyscrapers incorporate these farms into their overall green scheme, as food production pairs well with renewable energy generation and water conservation measures.

In 2009, the world reached a critical milestone. For the first time in history, more people made a city their home than a rural space. This trend towards urbanization shows no sign of slowing down, so it’s never been more critical to increase the sustainability of our cities. Green skyscrapers are poised to address an important component of this equation.

When set up correctly, they offer one of the lowest per-capita carbon footprints possible for a large population. Looking ahead, there’s more reason than ever to invest in sustainable housing and office space within dense urban environments.

By finding ways to make the places we live and work lighter on the environment, we are more likely to maintain a planet worth passing down to future generations.

Lydia Noyes is a freelance writer specializing in health and wellness, food and farming, and environmental topics. When not working against a writing deadline, you can find Lydia outdoors where she attempts to bring order to her 33-acre hobby farm filled with fruit trees, heritage breed pigs, too many chickens to count, and an organic garden that somehow gets bigger every year.