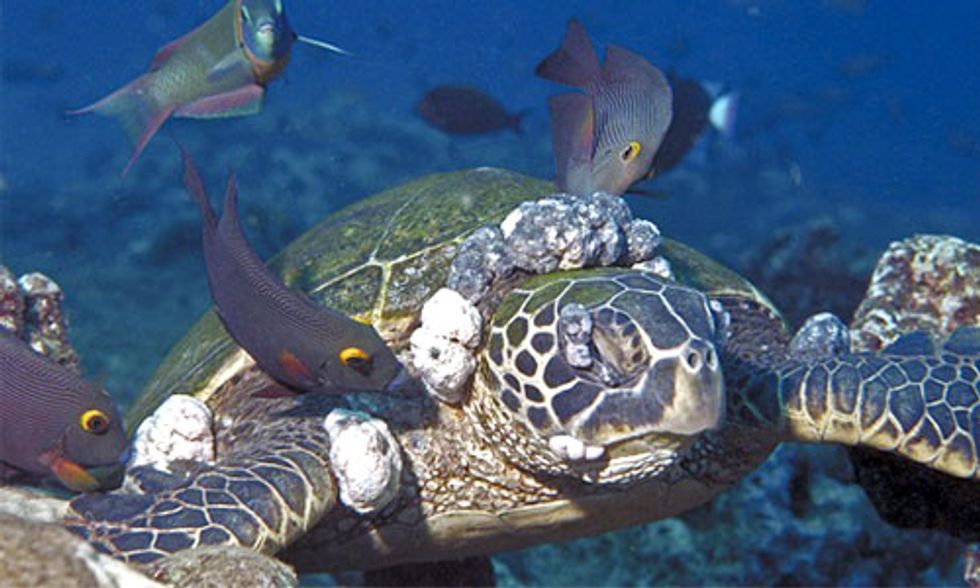 Green sea turtles are an endangered species, at risk from poaching, incidental take in fishing gear and coastal development. But they also suffer from fibropapillomatosis—the leading cause of death in this endangered species—which causes tumors to grow along sea turtles’ faces, flippers and internal organs.

Scientists recently grew their understanding of fibropapillomatosis, finding that nitrogen pollution from urban and farm pollution in Hawaii is the culprit behind this sad disease. Nitrogen ends up in the algae that these turtles feed on, culminating in a “nutrient cascade.” The authors recently published their study published in Peer J, which adds to a 2010 study that fibropapillomatosis to be predominant in areas of heavy runoff.

Excess nitrogen is stored in seaweed in the form of arginine, an amino acid. The scientists found high levels of arginine in both polluted waters and sea turtle tumors, and also found higher levels of arginine in an invasive red-algae species that can comprise 90 percent of some sea turtle diets. Because the sea turtles are herbivorous, they must consume twice as much of the invasive algae to get the same caloric intake they would from native algae, according to a Duke University press release. Researchers also found proline and glycine in the algae—two amino acids found in cancerous human tumors.

Though the sight of tumors growing on sea turtles is a sad one, the study’s findings offer insight that could inform better sea turtle conservation and management. The researchers also say that their findings can be useful in protecting fish, plants and coral reef communities as a whole who also suffer from pollution.

“If research continues to support this hypothesis, we probably need to reconsider our current ways of managing coastal nutrients,” study co-author Kyle Van Houtan said in the release.

Half the World’s Animal Population Vanished Since 1970