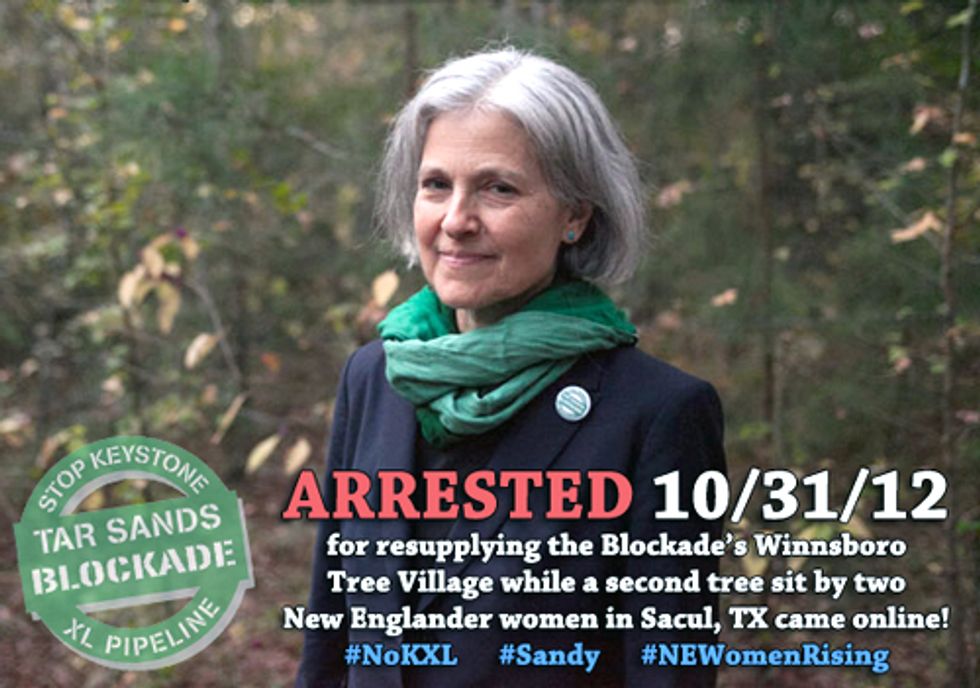 Green Party Presidential Candidate Dr. Jill Stein has been arrested today for literally walking the walk in her stance against dirty oil and corporate politicking.

Less than one week before the U.S. election, Green Party Presidential Candidate Dr. Jill Stein has been arrested for literally walking the walk in her stance against dirty oil and corporate politicking. Dr. Stein was detained while standing with peaceful Tar Sands Blockade protestors entering the 38th day of the Texas standoff against TransCanada Corporation’s Keystone XL export pipeline. She awaits processing at the Wood County jail.

In the devastating wake of Hurricane Sandy, which has killed at least 120 people in the U.S. and the Caribbean, and caused “almost incalculable” billions of dollars in damages, Dr. Stein traveled to Texas to re-supply tree sitters in Winnsboro, Texas along the southern route of the Obama Administration’s fast-tracked tar sands freeway.

Stein issued a statement prior to her arrest:

"I’m here to connect the dots between super storm Sandy and the record heat, drought, and fire we’ve seen this year—and this Tar Sands pipeline, which will make all of these problems much worse. And I’m here to connect the dots between climate devastation and pipeline politicians—both Obama and Romney —who are competing, as we saw in the debates, for the role of Puppet In Chief for the fossil fuel industry. Both deserve that title. Obama’s record of 'drill baby drill' has gone beyond the harm done by George Bush. Mitt Romney promises more of the same."

Stay tuned for more details of the arrests today, and keep up with the latest at the Tar Sands Blockade website.

"The climate is taking this election by storm, breaking the silence of the Obama and Romney campaigns that have been bought and paid for by the oil, coal and gas companies," said Dr. Stein. "Hurricane Sandy is just a taste of what's to come under the climate destroying policies of Romney and Obama. We must stand up now and call for climate solutions and green prosperity. The blockaders are heroes. They are on the front line of stopping even worse climate storms in the future."

Now blocking the Keystone XL tar sands pipeline from two new tree platforms in Sacul, Texas to the northwest of Nacogdoches are a 24-year-old duo of lifelong New England residents, Pika from Vermont and Lauren from New Hampshire. Their platforms are suspended in trees on either side of a Keystone XL highway crossing and are tied to heavy equipment, effectively immobilizing the equipment to the north and south of the crossing. Both were driven to participate with Tar Sands Blockade after witnessing the extraordinary hardship of extreme weather on their communities and extended families.

Now blocking the Keystone XL tar sands pipeline from two new tree platforms in Sacul, Texas to the northwest of Nacogdoches are a 24-year-old duo of lifelong New England residents, Pika from Vermont and Lauren from New Hampshire.

“Just a year ago, Vermont was hit really hard by Hurricane Irene. I spent months helping friends and family clean out basements and rebuild houses that were completely destroyed by flooding," shared Pika. “I have extended family in Arizona and Colorado who have been just crushed by the drought and the forest fires that have been happening in the last few years. I came here because this is one of the foremost campaigns against the most destructive resource extraction industry at the root of the climate crisis we are living in today.”

Lauren added, “I've always held the environment in the fore of my mind, but I haven't always been as sensitive to the personal stories of people directly impacted by pollution as I am today. Knowing that the ruin in my home state from Sandy only stands to be amplified by the toxic, leaky Keystone XL and the extreme impact of carbon emissions from ongoing tar sands development; joining with folks from all across the political spectrum to stop it; it's a powerfully humanizing process.”

“From the protesters defending the coast in British Columbia to the coastal residents of New England, Tar Sands Blockade stands in solidarity with communities across the continent threatened by climate change,” said Cindy Spoon, lifelong Texan and spokesperson for the Blockade. “Texas continues to suffer from the consequences of extreme drought and record setting wildfires. Defending our homes from destructive corporations like TransCanada is the best way to guard against a future of runaway climate change. The Keystone XL tar sands pipeline will only exacerbate the extraordinary climate challenges we face today.”