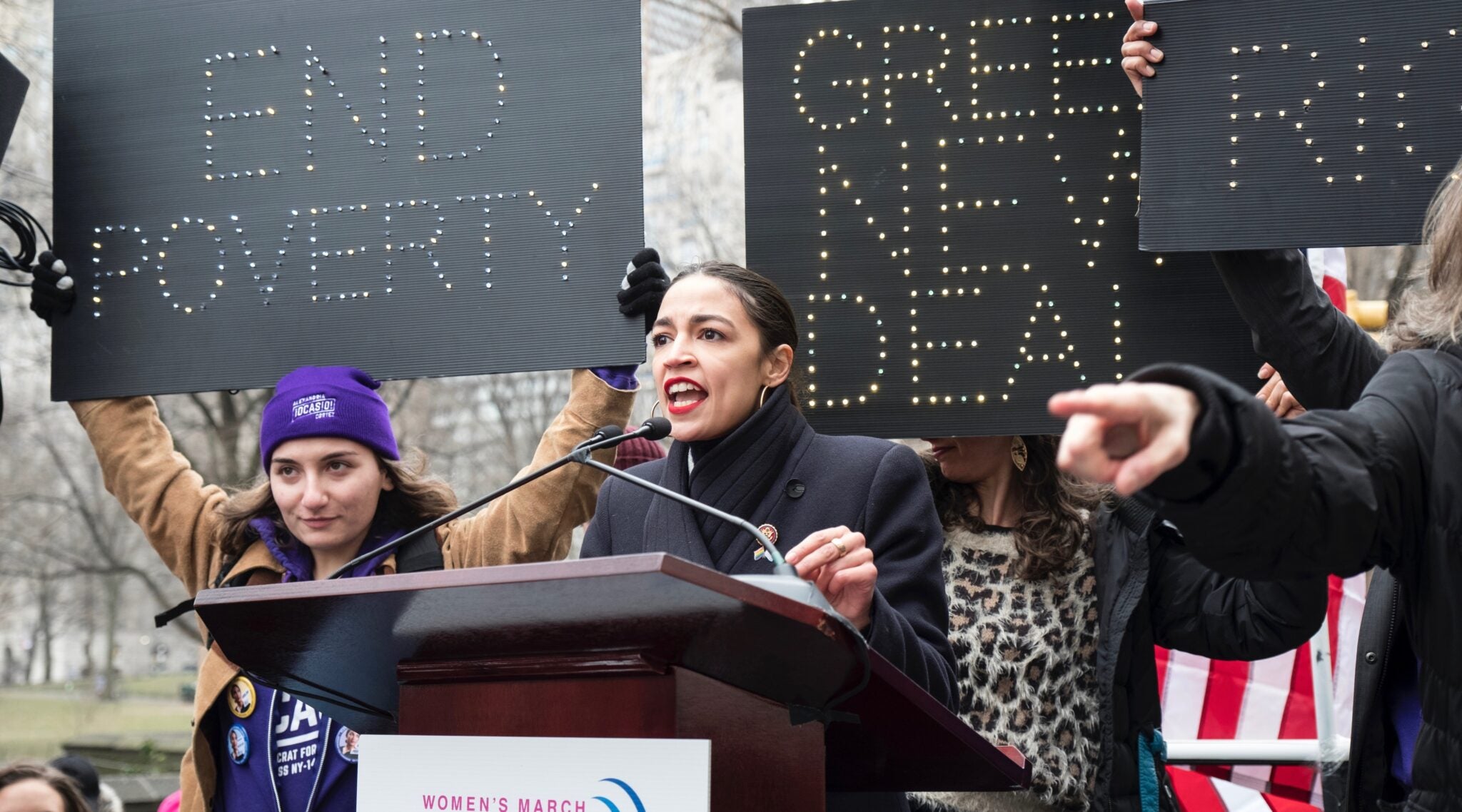 The sweeping 10-year plan aims to “mobilize every aspect of American society … to achieve net-zero
greenhouse gas emissions and create economic prosperity for all,” according to the resolution’s FAQs section from Ocasio-Cortez’s office posted by NPR.

The star freshman Congresswoman acknowledged that the ideas outlined in the non-binding resolution—such as providing “unprecedented levels of prosperity and economic security” for all citizens and “meeting 100 percent of the power demand in the United States through clean,
renewable, and zero-emission energy sources”—are incredibly grand but absolutely necessary.

As Ocasio-Cortez said on
NPR’s Morning Edition: “Even the solutions that we have considered big and bold are nowhere near the scale of the actual problem that climate change presents to us, to our country, to the world.”

As the resolution points out, the United States has “historically been responsible for a disproportionate amount of greenhouse gas emissions” so it must take “a leading role” in reducing emissions through economic transformation.

This resolution outlines a plan to launch a WWII scale transformation of our economy, including a just transition for workers & frontline communities, and moving to 100% clean and renewable energy by 2030

The overreaching goal of the Green New Deal is to entirely transition away from
nuclear energy and fossil fuels. To do so, the proposal calls for a wide-ranging mobilization of the U.S. economy and creating jobs through infrastructure and industrial projects, such as zero-emission vehicle infrastructure and manufacturing; installing smart grids; updating or creating buildings that are energy efficient; expanding clean energy jobs (like solar, wind turbine, battery and storage manufacturing); cleaning existing hazardous waste sites; and restoration of damaged and threatened ecosystems. 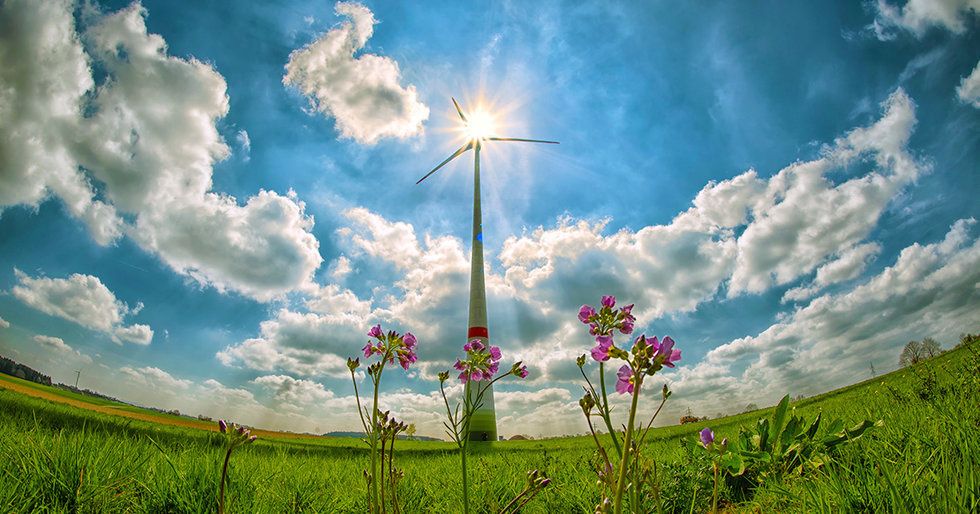 The Green New Deal calls for a complete transition to clean, zero-emission and renewable energy sources by 2030. Pexels

Along the same lines, the Green New Deal includes a significant social justice component because it aims to create millions of family-supporting and union jobs and will help protect disadvantaged communities on the frontlines of pollution and climate change.

“This is really about providing justice for communities and just transitions for communities,” Ocasio-Cortez explained on Morning Edition. “So really the heart of the Green New Deal is about social justice and it’s about allowing and fighting for things like fully-funded pensions for coal miners in West Virginia, fighting for clean water in Flint, and fighting for the ability of indigenous peoples to take a leadership role in in where we’re moving as a country.”

So here’s the big question—How do you pay for it? The FAQ section from Ocasio-Cortez’s office puts it bluntly:

“The same way we paid for the New Deal, the 2008 bank bailout and extended quantitative easing programs. The same way we paid for World War II and all our current wars. The Federal Reserve can extend credit to power these projects and investments and new public banks can be created to extend credit. There is also space for the government to take an equity stake in projects to get a return on investment. At the end of the day, this is an investment in our economy that should grow our wealth as a nation, so the question isn’t how will we pay for it, but what will we do with our new shared prosperity.”

It's amazing to hear @AOC explain and fight for how we're going to pay for the Green New Deal, when asked about massive government intervention.

"I have no problem saying that. Why? Because we have tried their approach for 40 years — to let the private sector take care of it." pic.twitter.com/kLum4DFjyu

The sweeping progressive proposal, of course, has its naysayers. As NPR’s Danielle Kurtzleben reported:

Among Republicans—even those worried about climate change—the package, with its liberal economic ideas, will also likely be a nonstarter.

“Someone’s going to have to prove to me how that can be accomplished because it looks to me like for the foreseeable future we’re gonna be using a substantial amount of fossil fuels,” said Rep. Francis Rooney, R-Fla., co-chair of the bipartisan Climate Solutions Caucus, speaking to NPR before the Green New Deal’s text was released.

As for the proposal’s passage, “That looks unlikely,” Kurtzleben wrote.

But this part in Kurtzleben’s report is key: “It’s worth talking about because it already is a politically powerful idea among Democrats.”

That’s not to mention the 45 House Reps and 330+ groups that backed the original resolution for a select committee on the Green New Deal.

Momentum for the Green New Deal has been growing ever since its was popularized by Ocasio-Cortez as well as the young climate activists of the Sunrise Movement who stormed then-presumed House Speaker Nancy Pelosi’s office not long after the midterm elections.

“In 2018, young people put the Green New Deal on the national agenda,” Varshini Prakash, founder and executive director of Sunrise Movement, said in a statement received by EcoWatch. “The historic support for this resolution, especially among 2020 contenders, shows how far the movement has shifted the political conversation. The Green New Deal is now a litmus test for progressive leadership in 2019.”

So far, the resolution has already been cosponsored by nearly 70 members of Congress, according to the Sunrise Movement.

Public opinion of the Green New Deal is strong. A Yale Program on Climate Change Communication survey of 966 registered voters showed that 92 percent of Democrats supported it, 64 percent of Republicans and 57 percent of conservative Republicans also thought it was a good idea.

This week, more than 100,000 petition signatures were delivered to Congressional offices in more than 100 events around the country, 350.org executive director May Boeve said in a press release emailed to EcoWatch.

“The Green New Deal is a critical opportunity to stand up to fossil fuel billionaires while kickstarting a just transition to renewable energy and creating millions of family-sustaining jobs,” Boeve said in a statement. “With the window for action to prevent catastrophic climate change quickly closing, it’s time for elected officials at all levels to support this visionary effort to secure a sustainable future.”