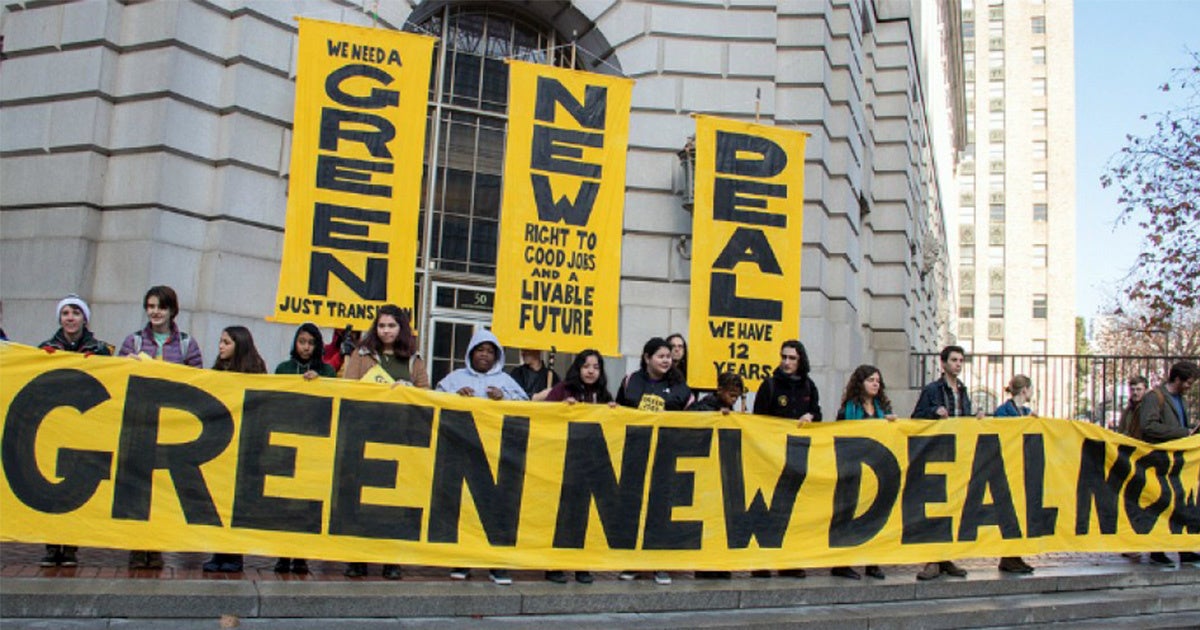 Over eight decades ago, the Dust Bowl devastated over 100,000,000 acres of agricultural land and the Great Depression threw 15 million Americans out of work. President Franklin Delano Roosevelt instituted the New Deal with sweeping national programs for work, agriculture, food, and land conservation.

Today, the plan for a Green New Deal recently announced by congressional representatives Alexandria Ocasio-Cortez and Bernie Sanders is facing down even greater crises.

Forty years of bipartisan consensus on neoliberal economic policies has produced unsustainable levels of global warming. It’s also polluted our water, destroyed our soils, contaminated our air and poisoned our bodies. This destruction has gone hand in hand with the rise of unprecedented economic inequality.

It is time to demand real—Rooseveltian—leadership from our elected officials on climate and equity issues. But policy gridlock runs deep. As the Sunrise Movement points out, either politicians advance policies without mobilizing their base for support, or social movements mobilize without elected officials to turn demands into policy.

This is why the Green New Deal is so exciting. It’s a plan to bring together progressive politicians and social movements. The Deal proposes turning our country into an energy-efficient, carbon-capturing, full-employment, living-wage nation by 2028. This will require a major government effort with massive social investment and bold economic policies to correct inequalities.

Could the Green New Deal turn the climate Titanic around before all the icebergs melt? That depends on whether or not the lower decks take control of the helm.

The Green New Deal will need copious amounts of political will, and there are only two ways to create that: big money or the power of social movements. Compliant politicians and the unbridled accumulation of wealth got us into this mess. It’s up to social movements to get us out.

Which social movements in the U.S. have enough skin in the game to tilt the country’s political will on equity and climate? The growing climate justice, indigenous peoples, and economic equity movements have been instrumental in addressing these issues in decisive and creative ways. But we need more.

It’s time for the nation’s farm and food justice movement to step up.

Why food and farming? First, because the industrial food system emits most of the planet’s greenhouse gases, and farming is reeling under the impacts of climate change. Second, because food and farming are the nation’s biggest, low-wage employers. And third, because the farm and food justice movement—spread wide and thin across both rural and urban landscapes—is fighting not just poverty, poor health, low wages and bad working conditions, but is seeking to reduce food’s environmental footprint as well.

The farm justice movement is the agrarian wing of the food movement. It promotes regenerative and agroecological farming practices like crop rotations that use perennials to stop erosion, improve water quality and ensure soil health, and diversified farming systems with grains, tree crops and livestock. These practices have been spreading throughout rural, urban and peri-urban areas, where permaculture and organic farming thrive. For these practices to provide viable livelihoods, we also need deep structural reforms, hard investments and economic incentives. The public banks mentioned in the Green New Deal could play a key role.

To stop the industrial overproduction of food—the root cause of food waste and agricultural emissions—we need strong supply management programs, equitable land access, conservation programs, diversification of farm income, antitrust enforcement and market reforms. If farmers are also provided with a guaranteed farm parity price for their product, they can conserve land instead of overproducing.

Prominent social justice organizations like the Climate Justice Alliance and the It Takes Roots Alliance support the Green New Deal, conditioned on a participatory “just transition.” That is, “[Programs] centering on reparations, decolonization and building a democratic economy through the advancement of the social and solidarity economy.” In other words, no regressive climate policies (like France’s explosive carbon tax) that cool the climate on the backs of low-income and middle class people.

Social movements have an opportunity to join together as never before—not just to get behind the Green New Deal—but to form a broad-based, multi-racial, working class movement to build political power. Visionary leaders from these movements are already knitting together strategies for solidarity, education and action.

This is essential because without strong grassroots involvement, a Green New Deal could be co-opted by industry to greenwash their operations and avoid a just transition. For example, government grants and tax breaks could go to giant CAFOs to build methane digesters for the livestock industry’s vast manure ponds. We need to prevent disaster capitalism—profiteering on working people’s climate misery—in which every crisis is an opportunity for amassing more corporate wealth.

If farm and food justice demands are articulated in the Green New Deal, it could help us transform our food system. This would have a major impact on our economy, our health and our environment.

For example, if the Green New Deal proposes “[Upgrading] every residential and industrial building for state-of-the-art energy efficiency, comfort and safety,” then farmhouses, sheds, barns, and suburban and inner-city farm sites stand to benefit. If we attain “100% of national power generation from renewable sources” combined with a “national, energy-efficient, ‘smart’ grid,” it should allow towns and neighborhoods to produce power in ways that plow economic resources back into the community. Of course, any renewable energy production on agricultural landscapes must avoid making these areas uninhabitable sacrifice zones. For this, the Green New Deal must ensure community-based, democratic management.

If we are to “[Decarbonize, repair and improve] transportation and other infrastructure” in the food system, we need to keep as much of the food dollar as possible in local communities by growing and consuming our food in close proximity. The photosynthesizing power of green plants and the carbon-storing capabilities of soil humus could be vastly increased through the Green New Deal’s “Funding [of] massive investment in the drawdown and capture of greenhouse gases,” allowing for the reforestation of riparian areas, woodlots and agroforestry plots, and even small-scale kelp farming.

The Plan for a Green New Deal opens the door to address longstanding justice issues by:

“[Taking] into account and [being] responsive to the historical and present-day experiences of low-income communities, communities of color, indigenous communities, rural and urban communities and the front-line communities most affected by climate change, pollution and other environmental harm; and [mitigating] deeply entrenched racial, regional and gender-based inequalities in income and wealth (including, without limitation, ensuring that federal and other investment will be equitably distributed to historically impoverished, low income, deindustrialized or other marginalized communities).”

These measures need to be part of our social justice platforms to address the inequitable levels of climate and environmental vulnerability. We need jobs with living wages to build family and community wealth. Food-producing communities need to be desirable places to live where the health, education and welfare of everyone is guaranteed. This will encourage young people to build on family and social networks and become active political and economic citizens who can determine their own destiny.

A Green New Deal could also help bring the food movement out of its political silo.

Many food activists seem to operate under the assumption that we can somehow change the food system in isolation from the larger political-economic system in which it is embedded. Changing everything in order to change our food system seems like an impossibly big task. But the food system can also be a lever for whole systems change.

The Green New Deal just might be the fulcrum upon which the farm, food and climate movements can pivot our society towards the just transition we all urgently need and desire.

81% of voters support a #GreenNewDeal to face the climate crisis!

"Why not try to save the planet, and create millions of living-wage jobs in the process?"https://t.co/4l8o37ukj2