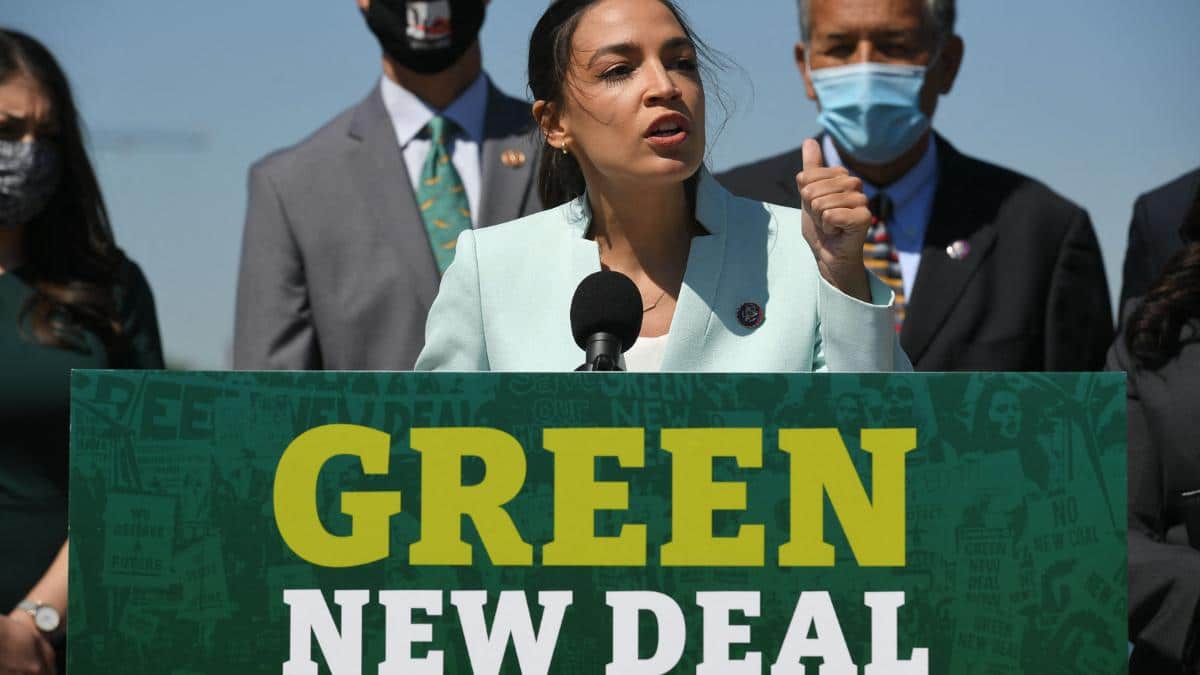 In the latest of a flurry of proposed Green New Deal legislation, Reps. Cori Bush and Alexandria Ocasio-Cortez on Monday introduced the Green New Deal for Cities Act of 2021, a $1 trillion plan to “tackle the environmental injustices that are making us and our children sick, costing us our homes, and destroying our planet.”

If approved, the bill would provide federal funding for state, local, tribal, and territorial governments to respond to the climate crisis, while creating hundreds of thousands of jobs in communities disproportionately affected by economic inequality.

“St. Louis and communities across the nation need the Green New Deal for Cities,” Bush (D-Mo.) said in a statement introducing the bill. The St. Louis native added that Black children in her city “are 2.4 times more likely than white children to test positive for lead in their blood, and are 10 times more likely to visit the emergency room for asthma each year than white children.”

“Black neighborhoods host the majority of the city’s air pollution sources,” Bush continued. “And there is a nuclear waste site—the West Lake Landfill, which is a catastrophe-in-progress.”

“This legislation would make sure every city, town, county, and tribe can have a federally funded Green New Deal,” she added. “This is a trillion investment to tackle the environmental injustices that are making us and our children sick, costing us our homes, and destroying our planet.”

Here's what it means for you:

In an interview with St. Louis Public Radio, Bush explained that the Green New Deal for Cities is personal for her.

“I remember talking about lead paint as a child, hearing about it on the television and showing up at parks and people testing us for lead,” she recalled. “It was like this thing when I was a kid, and it just went away.”

Tune in to @STLonAir at noon to hear @RepCori discuss her and her colleagues' proposal for a Green New Deal for Cities. It would authorize $1 trillion in spending over the next four years towards environmental justice projects in local communities. https://t.co/Q4huTyOcYP

Bush said that “this whole thing is about saving lives,” adding that “there are labor provisions in this bill to make sure that the workers are well-paid and well-treated for work.”

“The urgency of this climate crisis and environmental racism demands that we equip our cities and our local governments with this funding,” she added.

“The desire for these investments is there,” Ocasio-Cortez added. “We need to give our local communities the funding and support to act.”

Although only Monday, it’s already been a busy week for Ocasio-Cortez and the Green New Deal. Earlier in the day, she and Sen. Bernie Sanders (I-Vt.) reintroduced the Green New Deal for Public Housing, which they said would significantly improve living conditions and costs for nearly two million people who reside in public housing units, while creating more than 240,000 new jobs.

Later on Monday, Ocasio-Cortez and Sen. Ed Markey (D-Mass.) announced they will reintroduce their landmark 2019 Green New Deal bill on Tuesday. In a Spanish-language statement previewing the bill’s introduction, Ocasio-Cortez said the measure “aims to create a national mobilization over the next 10 years that fights against economic, social, racial crises, as well as the interconnected climatic conditions affecting our country.”