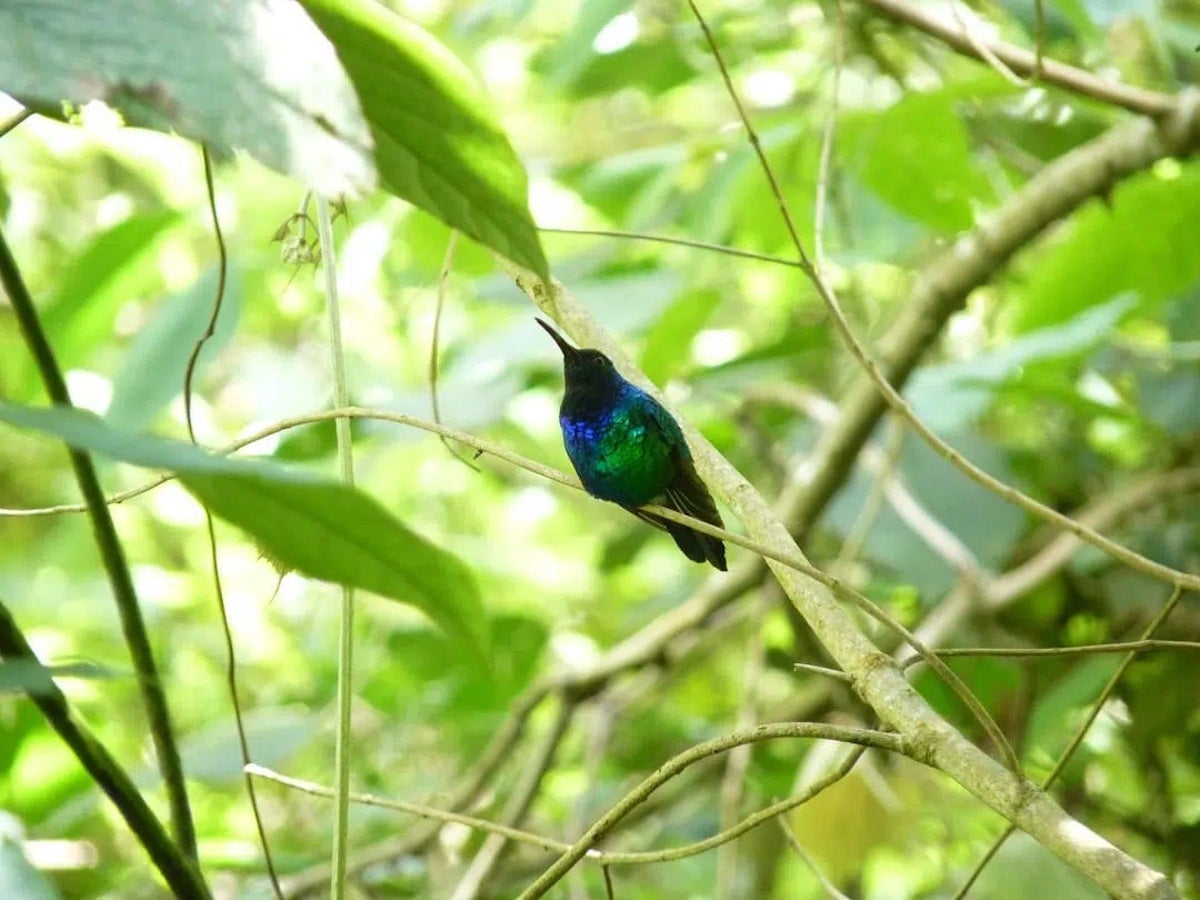 In the mountains of Colombia, an experienced bird-watcher saw an iridescent flash of blue and green. “A hummingbird caught my attention. I got out my binoculars and was shocked to see that it was a Santa Marta sabrewing,” Yurgen Vega said. “This sighting was a complete surprise, but a very welcome one.”

This was only the second time the critically endangered hummingbird has had a documented sighting since 1946. The last bird was spotted in 2010.

“When I first saw the hummingbird I immediately thought of the Santa Marta sabrewing. I couldn’t believe it was waiting there for me to take out my camera and start shooting,” Vega told The Guardian. “I was almost convinced it was the species, but because I felt so overcome by emotion, I preferred to be cautious; it could’ve been the Lazuline sabrewing [Campylopterus falcatus], which is often confused with Santa Marta sabrewing. But once we saw the pictures, we knew it was true.”

Ornithologists have been on high alert for the Santa Marta sabrewing, which is listed as one of the top 10 most-wanted lost birds by the Search for Lost Birds, a collaboration between Re:wild, the American Bird Conservancy and BirdLife International. None of the most-wanted birds have had a documented sighting in the wild in at least 10 years, and all (now with the exception of the sabrewing) are considered lost to science. Many of these lost birds are native to areas rich in biodiversity that also urgently need protection and conservation efforts.

“When we announced the top 10 most-wanted lost birds last year, we hoped that it would inspire birders to look for these species,” Mittermeier said. “And as this rediscovery shows, sometimes lost species reemerge when we least expect it. Hopefully rediscoveries like this will inspire conservation action.”

Not much is known about the Santa Marta sabrewing. It lives in mid-elevation humid tropical forests and is thought to be migratory, traveling to higher elevations in the paramo, an area of grass and shrubs, to find flowering plants to feed on in the rainy season. The population of Santa Marta sabrewings in the Sierra Nevada de Santa Marta, researchers believe, is small and dwindling.

“[This] means that it is critically important for conservationists, local communities and government institutions to work together to learn more about the hummingbirds and protect them and their habitat before it’s too late,” Esteban Botero-Delgadillo, director of conservation science with SELVA: Research for Conservation in the Neotropics, said in a statement.

Scientists now plan to search for more individuals and stable populations of the species to understand where they live and what threats they face in the wild.

“The Sierra Nevada de Santa Marta is so incredibly biodiverse and harbors so many amazing endemic species,” said Lina Valencia, Andean countries coordinator at Re:wild. “It’s hugely exciting to have proof that the Santa Marta sabrewing is still living in the mountains. We still have time to save it.”

Liz Kimbrough is a staff writer for Mongabay. Find her on Twitter @lizkimbrough

City Trees Save Lives, First-of-Its-Kind Study Finds
Urban planners could save lives by planting more trees.
By Olivia Rosane
7 Colorado River States Miss Deadline for Water Reduction Plan
Seven states that depend on the drought-stricken Colorado River for
By Cristen Hemingway Jaynes
Biden’s EPA Protects Alaska’s Bristol Bay From Controversial Pebble Mine
The watershed of Bristol Bay, Alaska, is home to the
By Olivia Rosane