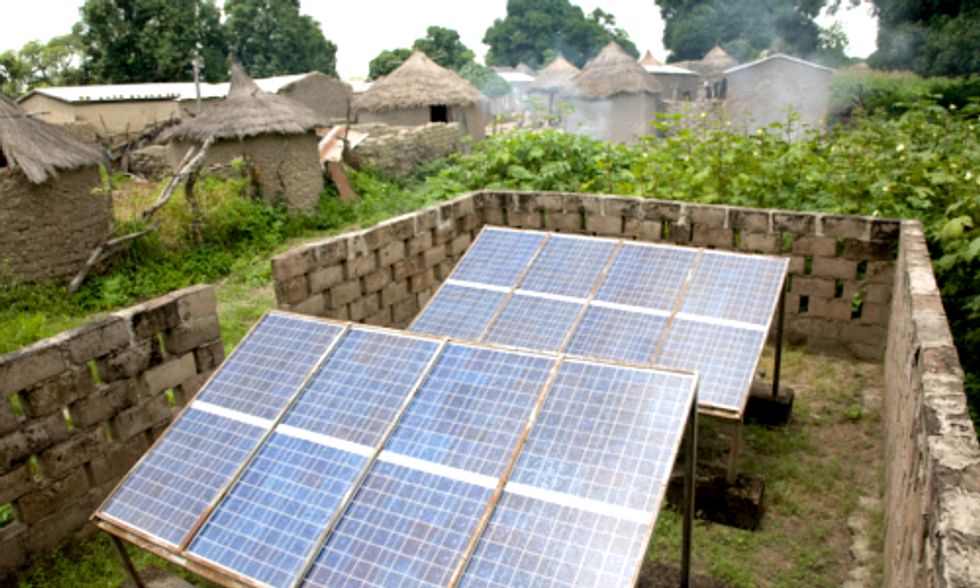 A vast program of financing solar, wind and other renewable electricity technologies for developing countries using the UN’s new Green Climate Fund was proposed this week.

The Fund is currently being set up by the United Nations Framework Convention on Climate Change to “provide support to developing countries to limit or reduce greenhouse gas emissions” as well as to help them to adapt to global warming.

The report by the World Future Council says providing feed-in tariffs for developing countries so that they can finance setting up large-scale renewable systems and feed electricity to their grids is the best way forward for the fund.

Feed-in tariffs provide the owners of small or large-scale wind and solar arrays with a guaranteed price for electricity over 20 years, so the investor is certain to get a return on their capital. The scheme has worked in developed countries like Germany and Italy to rapidly boost renewable output.

If the same system was introduced into developing countries, the report says, it would be an important step in keeping the world’s temperature from exceeding a 2°C increase over pre-industrial levels, the limit set by politicians as the threshold of  unacceptably dangerous climate change.

Although the Green Climate Fund is still not operational, the report says that a one billion euro fund should be made available as soon as possible for pilot projects in three countries to test the feed-in tariff scheme.

These would be for three classes of countries, starting with one of the least developed states and two that are more advanced but still in need of power. That would test how the scheme would work and who would benefit most from it, and would eliminate some of the teething problems.  Depending on the technology chosen, this money could fund between one and three megawatts of clean power.

That way any glitches could be discovered and then corrected when a much larger amount of funding became available. Hundreds of wind, solar, energy-efficient biomass and small hydropower projects could then be financed in the same way.

Axel Michaelowa and Stephan Hoch say in the report, Fit for Renewables?, that their scheme needs tight controls to make sure that money is not wasted.

Although they do not mention the criticism of the Convention’s Clean Development Mechanism, where carbon credits have been claimed for dubious projects, they do not want another UNFCCC scheme designed to help developing countries to fall into disrepute.

They acknowledge that one of the problems of getting feed-in tariffs right is that the price of renewables, particularly solar, is falling all the time. If the support price is set too high there is a massive uptake and the country concerned is locked into paying too high a price for electricity. If the price is cut too quickly then the industry judders to a halt and many are thrown out of work, a situation that occurred in the United Kingdom.

An added problem in developing countries is making sure that the national or local grid can take up and use the electricity generated. Some developed countries have already had difficulties with this, so sorting out the grid must be part of any financing package, the report says.

The authors say the Green Climate Fund needs to look at all these aspects and develop a transparent system that prevents overfunding of schemes and builds trust, so that industrialised countries provide sufficient money.

The report envisages 100 gigawatts of electricity being funded in this way by 2020 – the equivalent of the output of 100 large-scale coal-fired power plants. This would cost nearly $1.8 billion a year to fund, sustained over two decades.