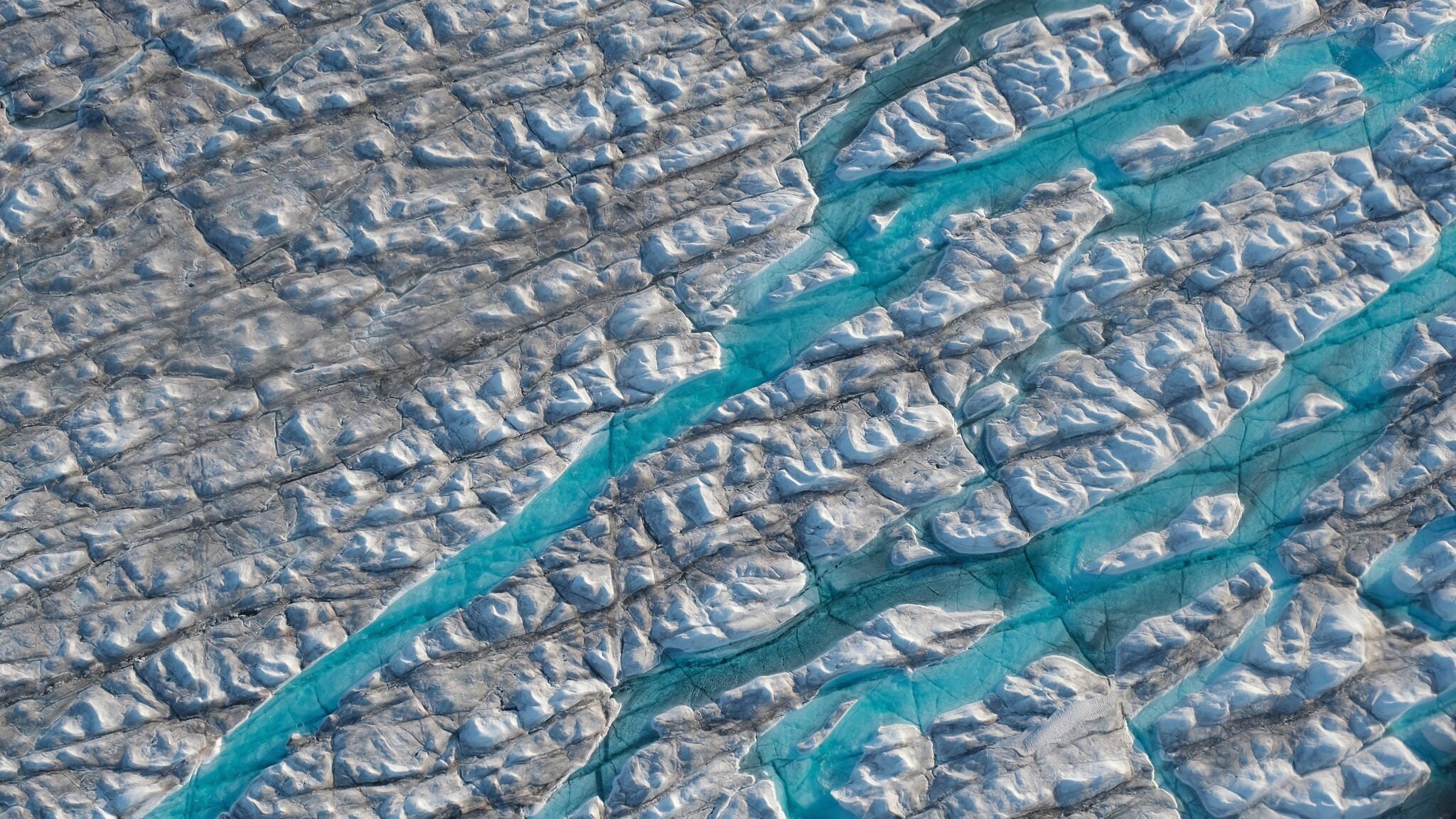 In this view from an airplane rivers of meltwater carve into the Greenland ice sheet near Sermeq Avangnardleq glacier on Aug. 4 near Ilulissat, Greenland. Climate change is having a profound effect in Greenland, where over the last several decades summers have become longer and the rate that glaciers and the Greenland ice cap are retreating has accelerated. Sean Gallup / Getty Images

The rate that Greenland‘s ice sheet is melting surpassed scientists’ expectations and has raised concerns that their worst-case scenario predictions are coming true, Business Insider reported.

A new study published in the journal Nature from a team of scientists at NASA and the European Space Agency looked at satellite imagery from 1992 to 2018 from 26 independent data sets. The images revealed a massive amount of ice loss that is picking up steam as time goes on. In fact, the researchers found that Greenland has lost 3.8 trillion tons of ice over the 26-year period studied.

In the 90s, Greenland lost an average of 25 billions of ice per year. That number has picked up to an annual average loss of 234 billion tons per year. The study finds that the acceleration in melting will mean a three to five-inch rise in global sea levels by 2100, which is in line with the worst-case scenarios set by the Intergovernmental Panel on Climate Change’s (IPCC).

That rate will mean 400 million people will be at risk of flooding every year, instead of the 360 million that the IPCC’s main prediction forecasted, as The Guardian reported.

“The most surprising aspect by far is that the increased sea-level rise, which may seem small to most people but is enough to cause an extra 40 million people to experience annual floods,” said Andrew Shepherd to Business Insider. Shepherd is from the Centre for Polar Observation and Modeling at the University of Leeds in the UK, and he is the study’s lead author. “Small changes in sea-level rise do matter.”

It also means some of the irreversible effects of the climate crisis will happen sooner than scientists first predicted, as The Guardian reported.

“These are not unlikely events or small impacts,” said Shepherd, as The Guardian reported. “[These impacts] are happening and will be devastating for coastal communities.”

In fact, every centimeter of sea level rise makes a big difference and increases the chances that a storm surge will breach any sea wall.

“Storms, if they happen against a baseline of higher seas – they will break flood defenses,” said Shepherd to the BBC. “The simple formula is that around the planet, six million people are brought into a flooding situation for every centimeter of sea-level rise. So, when you hear about a centimeter rise, it does have impacts.”

Greenland is home to the planet’s only permanent ice sheet outside of Antarctica. The ice sheet covers three-fourths of Greenland’s landmass. To conduct the study, a consortium of 89 scientists, representing 50 different institutions from around the world teamed up to form the most complete picture to date of Greenland’s ice loss.

The Ice Sheet Mass Balance Inter-comparison Exercise (IMBIE), used data from 13 NASA and European Space Agency satellite missions to calculate the tremendous amount of ice loss that Greenland has experienced over the last 26 years, according to a statement from NASA’s Jet Propulsion Laboratory at CalTech.

“There are climate projections that are based on models of varying levels of complexity and observations, but they have large uncertainties,” said Erik Ivins, an author on the study and lead scientist at NASA’s Jet Propulsion Laboratory, in a statement. “Our study is purely an observational one that tests those uncertainties. Therefore, we have irrefutable evidence that we seem to be on track with one of the most pessimistic sea level rise scenarios.”

The IPCC is usually seen as the gold standard for climate science, but some experts fear that its findings did not include potential tipping points, where the climate crisis becomes catastrophic and irreversible, as The Guardian reported.

Louise Sime, a climate scientist at the British Antarctic Survey, spoke to The Guardian about the new study and said that “this finding should be of huge concern for all those who will be affected by sea level rise. If this very high rate of ice loss continues, it is possible that new tipping points may be breached sooner than we previously thought.”