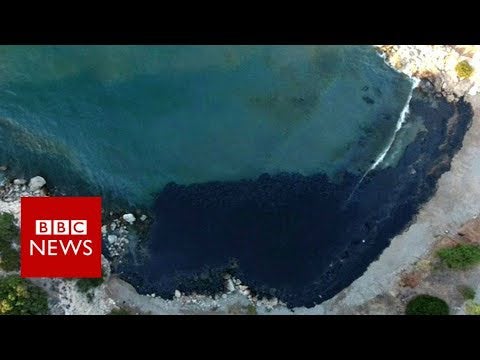 The sinking of a tanker carrying 2,200 tons of fuel oil and 370 tons of marine gas oil has coated some of Greece’s most popular beaches in thick, black sludge, leading to health authorities to ban swimming along shorelines in Athens.

The Agia Zoni II tanker sank Sunday off the coast of Salamina island and left behind “a huge environmental and financial disaster,” Salamina mayor Isidora Papathanasiou told local news, adding that the “smell is intense and our eyes are stinging.”

The mayors of Salamina, Piraeus and Glyfada warned they might take legal action over the pollution “against whoever is responsible.”

Greece’s government has been criticized for not doing enough to prevent the oil slick from spreading to the Saronic Gulf in Athens, a region home to a wide variety of marine life including dolphins, turtles, fish and sea birds.

“If a small relative leak causes such a disaster next to the country’s largest port and the operational center of the Ministry of Mercantile Marine, what exactly is the country’s ability to cope with spills and accidents from large-scale oil activities in the Ionian Sea and the Cretan Sea?” said Takis Gregoriou, the head of the campaign for climate change and energy at Greenpeace Greece, in a statement.

After touring affected areas, shipping minister Panagiotis Kouroumblis insisted that the situation is improving. He said that cleanup is underway and also suggested Thursday he would resign if asked by Prime Minister Alexis Tsipras, according to Greek Reporter.

The Associated Press reports that Greece has requested help from the European Union’s Civil Protection Mechanism and deployed a specialized cleanup vessel.