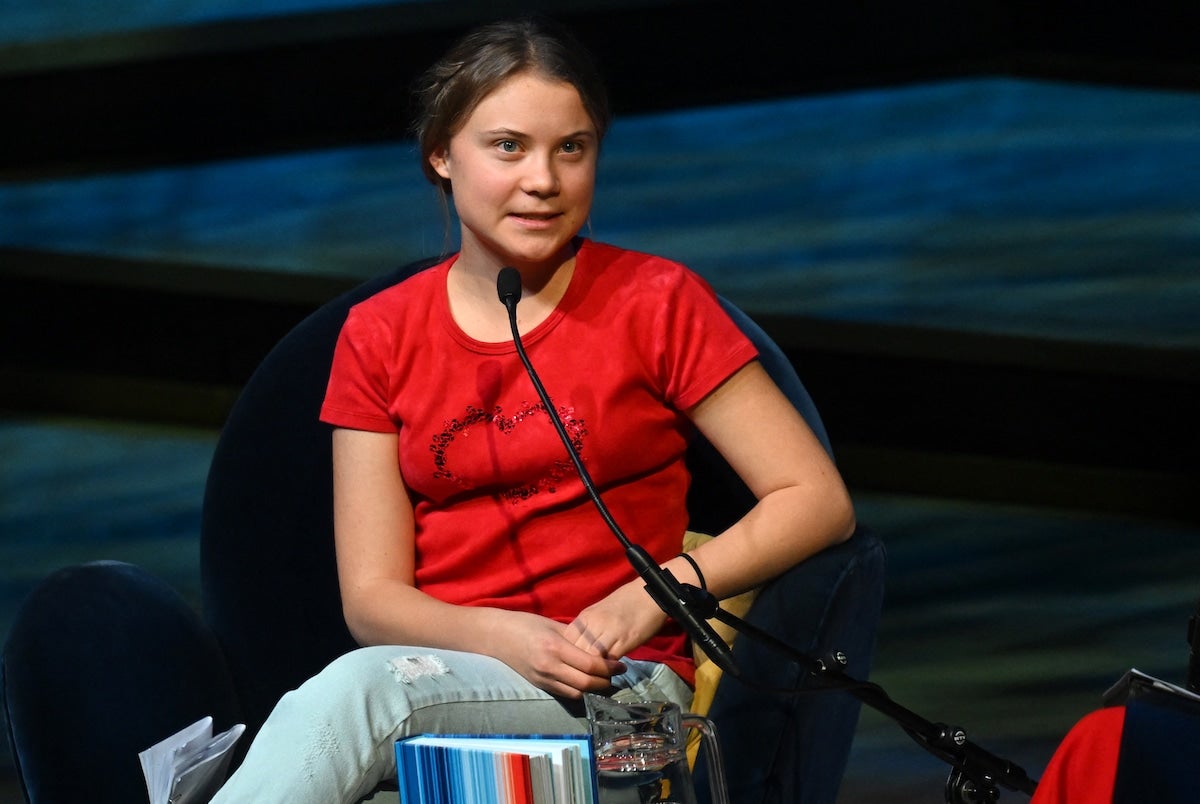 Greta Thunberg speaks during the launch of her latest book "The Climate Book" at the Southbank Centre's Royal Festival Hall in central London on Oct. 30, 2022. JUSTIN TALLIS / AFP via Getty Images

When the 27th Conference of the Parties (COP) to the United Nations Framework Convention on Climate Change opens November 6 in Sharm El-Sheikh, Egypt, one notable face in the climate movement will not be present.

Nineteen-year-old Swedish activist Greta Thunberg said she would not attend the conference during a talk in London Sunday as she promoted her new book The Climate Book, The Guardian reported. She also criticized the COP process in general.

“As it is now, the COPs are mainly being used as an opportunity for leaders and people in power to get attention when they say, ‘We’re going to change,’ and using many different kinds of greenwashing, lying and cheating and so on,” Thunberg said in an interview with journalist Samira Ahmed.

Thungerg was speaking as part of the Southbank Centre’s London Literature Festival to promote her new book, as The Independent reported. The Climate Book debuted October 27 in many parts of the world including the UK, according to Green Matters. The book features more than 100 essays from climate activists and experts including Bill McKibben, Michael Mann and Naomi Klein, as well as essays by Thunberg herself. However, U.S. readers will have to wait until February 14, 2023 to get their hands on a copy.

In a speech on Sunday, Thunberg called for rapid action to address the climate crisis. She pointed to the United Nations Emissions Gap Report released October 27, which found that national pledges strengthened after last year’s COP26 in Glasgow, Scotland, still put the world on track to 2.4 to 2.6 degrees Celsius of warming by 2100 and that emissions needed to fall by 45 percent by 2030 compared to current policies in order to avoid the worst aspects of the climate crisis and limit warming to 1.5 degrees Celsius above pre-industrial levels.

“Earlier this week, the United Nations Environment Programme released the Emissions Gap report stating that only an urgent system-wide transformation can deliver the enormous emissions cuts needed to stabilize 1.5 degrees Celsius by 2030,” Thunberg said. “And, to quote the IPCC, we need rapid, far-reaching, unprecedented changes in all aspects of society.”

Thunberg called out world leaders for consistently failing to act in time, which is the reason the COP does not function. If the transition away from fossil fuels had begun 20 to 30 years ago, the gradual pace of change promoted by those conferences might have worked, Thunberg said.

“As it is now, the COPs are not really going to lead to any major changes. Unless, of course, we use them as an opportunity to mobilize, which we must try to do, and make people realize what a scam this is, realize that these systems are failing us,” Thunberg said.

COP27 has faced additional criticism by environmental, human rights and civil society groups because of the Egyptian government’s restrictions on public protest and detention of human rights advocates. Thunberg was one of 968 groups and individuals to sign a petition calling on Egypt to open up civic space and release everyone arbitrarily detained ahead of the conference. She also met with the sister of Alaa Abd el-Fattah, a British-Egyptian writer imprisoned in Egypt, who has been calling for his release by protesting outside the Foreign Office, as The Independent reported.

“I’m not going to COP27 for many reasons, but the space for civil society this year is extremely limited,” Thunberg, who did attend COP26, said Sunday, as The Guardian reported.

COP27 has also been criticized for greenwashing by accepting Coca-Cola as a sponsor.

In her talk on Sunday, Thunberg advised listeners not to rely on world leaders and to demand change by participating in climate activism.

“In order to change things, we need everyone — we need billions of activists,” she said, as The Guardian reported.

‘Cleaner Air Is Coming’ as London Expands Vehicle Pollution Fee to Entire Metro Area
By Brett Wilkins
By Common Dreams
Dreaming of Beachfront Real Estate? Much of Florida’s Coast Is at Risk of Storm Erosion
By Zhong-Ren Peng
By The Conversation
Is the World Cup Really Carbon Neutral?
The 2022 World Cup kicked off Sunday with a match
By Olivia Rosane