Five years of
drought and over-use of water from feeder rivers has seen Utah’s Great Salt Lake shrink by almost 40 percent. The changes were dramatically revealed in before-and-after photos taken by the Landsat 8 satellite, recently released by NASA.

Before and after images taken in 2011 and 2016 reveal dramatic shrinkage of Farmington Basin in the Great Salt Lake. Joshua Stevens/Landsat/US Geological Survey

The Great Salt Lake is the
largest salt-water lake in the Western Hemisphere. Three major rivers feed into the lake, but it has no outlet. Water leaves only through evaporation, creating the high salinity levels that give the lake its name. It is the eighth-largest such terminal lake in the world.

For more than 150 years, more water has been drawn out of the Salt Lake watershed than flows into it. The amount of water in the lake has declined by 48 percent and the lake level has fallen 11 feet since 1847.

Now, Utah is planning to spend
$1.5 billion to build seven dams along the Bear River, diverting as much as 220,000 acre-feet annually. This could drop water levels in the Great Salt Lake another four feet. The Utah Rivers Council calls it “disastrous.”

River flow into the basin has dropped 39 percent since the middle of the 19th century, largely due to population growth and agriculture. Irrigation consumes 63 percent of overall water use from the Bear, Jordan and Weber rivers that feed into the Great Salt Lake.

“Farmington Bay has been nearly desiccated as the result of the combined effects of drought and water withdrawals from the rivers feeding the lake,” said
Wayne Wurtsbaugh, who studies watershed sciences at Utah State University.

Water conservation programs promoted by the state have helped reduce water use per-person by 18 percent, but remain the
second-highest in the U.S. Plus, a growing population offsets many of those gains. 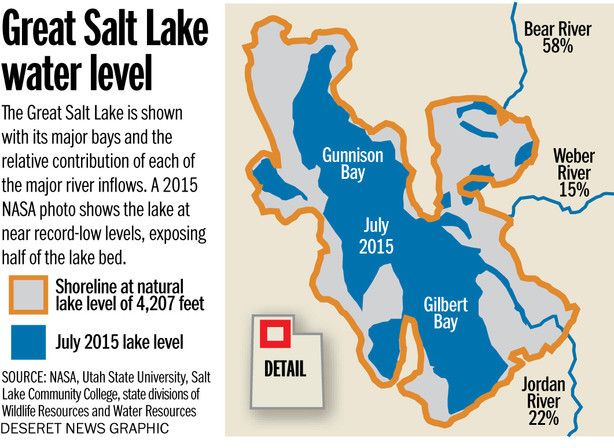 NASA said that higher-than-normal temperatures and the five-year
drought plaguing the American West have also taken a toll. The lake is known to respond rapidly to variations in rainfall.

“A wildcard for the fate of the lake is what global
climate change may do to the basin,” said Wurtsbaugh.

Wetlands along the northern and eastern shores of the lake provide habitat for more than 250 species of migratory birds and account for about 75 percent of the wetlands in Utah. These birds, numbering in the millions, feed on the lake’s brine shrimp and brine flies.

As the lake shrinks, marinas have had to move. More and larger dust storms besiege the area. The lake’s $1.3 billion contribution to Utah’s economy is threatened.

“The solution to the water issue is greater conservation, particularly for agricultural irrigation,” said Wurtsbaugh.

But the public has to do its part as well.

“If you walk across the Salt Lake Valley on a summer day, you will see gutters full of water,”
said Zachary Frankel, executive director of the Utah Rivers Council. “You will see people watering concrete because water is so cheap. And there are no repercussions for that. There are no water cops, there’s no water education, nothing like that.”