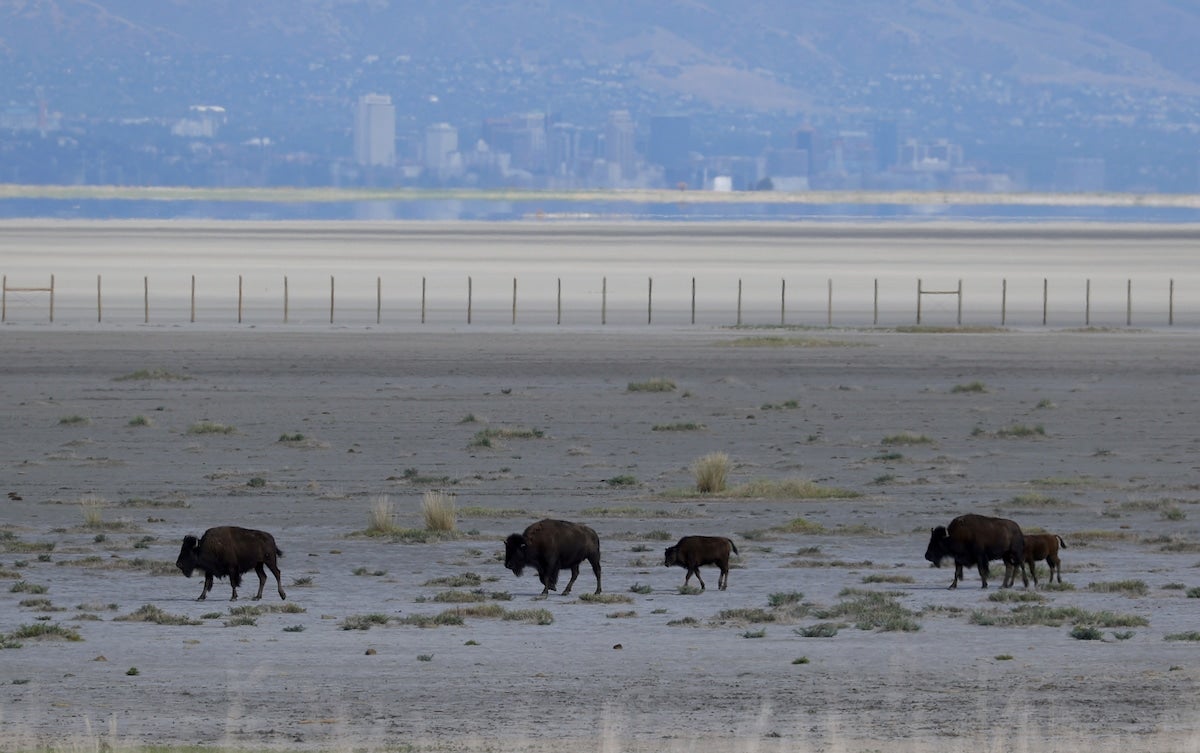 Bison walk along a section of the Great Salt Lake that used to be underwater, near Salt Lake City, Utah on Aug. 1, 2021. Justin Sullivan / Getty Images

Climate change is causing lakes to dry up, leading to a number of unfortunate circumstances. The latest? As the Great Salt Lake’s water levels continue to decline, it could cause a toxic dust cloud to form around Salt Lake City.

The Great Salt Lake has decreased by two-thirds of its size since the 1980s, and as it shrinks, it has seen increasing salinity levels. In turn, the water may kill off more marine life, which 10 million migratory birds depend on for food.

Even more frightening, the shrinking lake means more arsenic from the lake bed will be exposed. High winds and storms may carry the arsenic into the air that surrounds nearby Salt Lake City. Salt Lake City is home to about 75% of Utah’s entire population.

“We have this potential environmental nuclear bomb that’s going to go off if we don’t take some pretty dramatic action,” Joel Ferry, a Republican state lawmaker and lakeside rancher in Utah, told The New York Times.

Lawmakers in Utah are concerned that the declining water levels will lead to a similar ongoing scenario in California. There, Owens Lake was entirely drained for municipal water use in Los Angeles, which has now paid $2.5 billion to prevent toxic air pollution from taking over the city.

Some potential solutions include diverting less snowpack away for municipality and agricultural uses, as the snowpack runoff feeds into the lake. Salt Lake City could also instate fines, water use restrictions and other water conservation measures.

Utah lawmakers have also recently started looking into the possibility of building a pipeline from the Pacific Ocean to bring water into the Great Salt Lake.

“We have to have a solution where more water goes to the Great Salt Lake, either through natural stream flow or, you know, now we’re hearing about this pipeline proposal,” Jim Steenburgh, a professor of atmospheric science at the University of Utah, told Gizmodo. “That proposal is probably going to be extremely expensive and not very practical, but who knows? It’s often said that water flows uphill to money, so I don’t exactly know where this will go. But we’re in the very early stages in figuring out how we can save, or at least mitigate, the decline of the Great Salt Lake.”

While experts are still trying to figure out a solution, it’s clear that the consequences of ongoing water crises in the western U.S. are posing significant threats to people and wildlife in these regions.

“When hurricanes and other natural disasters strike the East Coast, or the Gulf states, Washington springs into action to protect those communities,” Senator Michael Bennet (D-Colo.) said in a statement. “But we haven’t seen anything like that kind of response to the Western water crisis, even though its consequences are far more wide-reaching and sustained than any one natural disaster.”