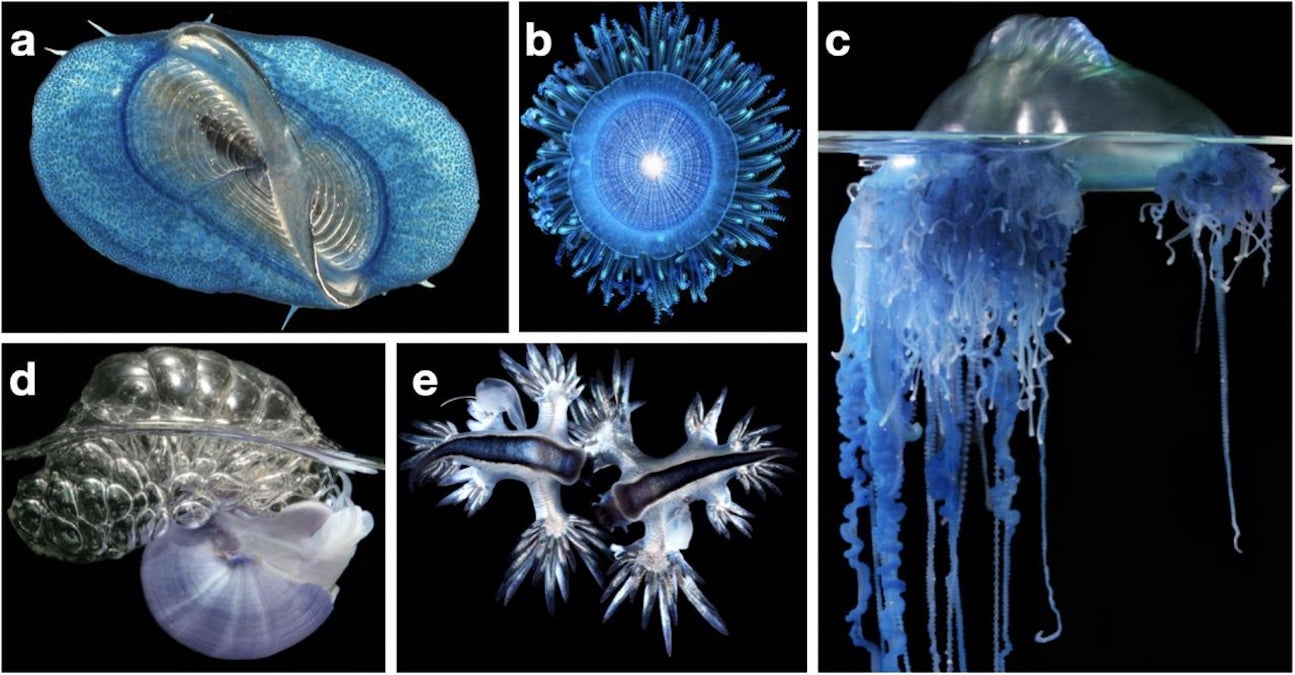 The Great Pacific Garbage Patch is infamous for being the largest collection of ocean plastic in the world. Twice the size of Texas, it is home to more than 1.8 trillion pieces of plastic that weigh an estimated 80,000 tonnes.

But a new study made available ahead of peer review in the biology preprint service bioRxiv last month reveals that the garbage patch is home to more than just human trash. It also hosts a community of floating marine life that plays a vital role in ocean ecosystems.

“Our most important finding would be the possibility of ecosystems in these areas that we know virtually nothing about,” study co-author and University of North Carolina, Asheville, assistant professor of biology Rebecca Helm told EcoWatch. “So it’s kind of this opening up of that sense of mystery of like what really is in the garbage patches.”

The paper focuses on a group of marine animals known as floating life, or obligate neuston. These are lifeforms like  cnidarians, mollusks, barnacles, copepods and algae that move across the surface of the ocean via currents.

“All of these taxa are at the nexus of a surface food web that includes diverse sea birds, fish and turtles,” the study authors wrote.

Yet despite their foundational role in ocean ecosystems, surprisingly little is known about where they concentrate. Their only known hangout is the Sargasso Sea, which is actually named for the floating Sargassum algae. But could there be other “neuston seas” in the ocean?

The Great Pacific Garbage Patch is formed because the rotating currents of the North Pacific Subtropical Gyre draw debris into its calm center and trap them there, as National Geographic explains. The study authors wondered if a similar thing might be happening to neustonic life.

To find out, they teamed up with long-distance swimmer Ben Lecomte, who set out to swim at least 300 nautical miles through the garbage patch to represent the 300 million tons of plastic produced each year. The so-called Vortex Swim expedition set out from Honolulu, Hawaii in June 2019 and ended up in San Francisco, California in August. Along the way, researchers collected 22 samples – 12 from the middle of the garbage patch and 10 on the periphery.

What they found appeared to prove their hypothesis correct: There was more floating life in the center of the garbage patch than on the outskirts, and samples high in plastic were also high in floating life.

Helm painted a picture of some of the floating life that makes the garbage patch their home. Finds included:

The research team also observed blue button jellies and Portuguese man-o-wars. If all of these organisms congregate in the Great Pacific Garbage Patch, they may also be drawn to other ocean plastic hot spots.

“Our findings suggest subtropical gyres and other areas of high plastic concentration may be more than just garbage patches,” the study authors wrote.

Indeed, they may be neuston seas.

The study does not claim that the plastic in the garbage patch itself attracts the floating life. Instead, the neuston and the plastic are drawn to the gyre because of the same currents. However, the presence of these buoyant organisms has important implications for how the plastic should or shouldn’t be removed.

“For me, the big takeaway is to really close the tap,” Helm said, “because once the plastic gets out there, it’s mixing with the ecosystem.”

This means that cleaning it up in a way that doesn’t further harm that ecosystem is a delicate task. Helm compared the garbage patch to a meadow.

“You would never sort of bulldoze through a meadow to collect all the plastic bags and plastic litter that was in the meadow, because you’d know intuitively that the meadow is full of life,” Helm explained. “It’s full of plants and animals and baby rabbits and all these little things. I don’t think people think about the ocean surface in the same way.”

However, that doesn’t mean the plastic in the gyre isn’t a problem for the ecosystem. Because neustonic life forms the basis of the marine food web, it’s entirely possible that the reason turtles or sea birds ingest so much plastic is because they are hunting for jellies.

“I accidentally collected my first neustonic organism because I was collecting plastic on the beach and I picked up a skeleton of one of these by-the-wind sailors, and it had the same texture as a plastic bottle,” Helm said.

Still, the relationship between ocean plastic and marine life is complicated. While the plastic doesn’t create a habitat for floating life, who don’t need anything to rest on, it does offer a mobile home to rafting animals like crabs, barnacles and anemones. Helm’s study didn’t look at these rafting animals, but a 2021 study found that plastic debris in the patch had brought coastal animals to the open ocean. Helm said there was evidence from other studies that an ocean-running insect called the sea skater actually had more places to lay its eggs because of plastic debris.

Overall, the study demonstrates that a whole new ecosystem is in need of further understanding. The research still needs to be peer-reviewed. The team submitted it as a preprint out of a commitment to open science and were surprised by the amount of publicity it received. But they are using the opportunity to educate people about the floating ecosystem they discovered.

Going forward, Helm and her team plan to look for more floating life in other plastic patches in both the Atlantic and the Pacific.

“We also hope that this research inspires other people to look into life at the surface and neustonic life,” she said.

Spending six-to-eight hours every day in the waters of the garbage patch, Ben Lecomte had a fish’s eye view for how the Great Pacific Garbage Patch at least is a hub of both plastic and life. He said that when he put his head beneath the water, he could see flecks of plastic floating all around him.

“At times it was almost like swimming through a snowstorm,” he told EcoWatch in an interview.

“Maybe the weirdest one was a toilet seat,” he said.

But Lecomte was not the only living being swimming through the plastic.

“It’s overwhelming to see that it’s all the way around you, and you still have sea life around you, still have a sperm whale right there swimming in the middle of the garbage patch. And those big animals, you know that they are ingesting plastic all the time,” he said.

Lecomte also observed sharks that would circle and then depart, petrels that would peck at his fist when he took a break and schools of fish that would signal a large piece of debris by swimming towards him and then back towards their home.

But he also witnessed directly how the plastic pollution was harming marine life. At one point, the expedition crew caught a mahi-mahi and discovered that it was filled with plastic. They also found a fish stuck in a plastic bottle.

“I guess he entered the bottle and stayed there as a protection,” he told EcoWatch. Then, he speculated, “it grew and it looks like it was too big to get out.”

Lecomte was inspired to use his swimming to draw attention to the plastic crisis by witnessing the difference between the trash-free beaches of his childhood and the beaches he walks with his children today.

“I realized that in a matter of less than a generation, we pretty much screwed up our environment,” he said.

Lecomte’s next awareness-raising swim was delayed until 2023 because of the coronavirus pandemic. He will visit six World Heritage Sites, swimming for 24 hours in each while a team observes the amount of plastic pollution in these remote areas and conducts beach cleanups.

After all his swimming, what does Lecomte hope that people on dry land will do about plastic pollution?

“We all have to first, to be educated about it and understand the… negative impact it has on our environment and then after to look at what in our life we can change and start with a small step,” he said.