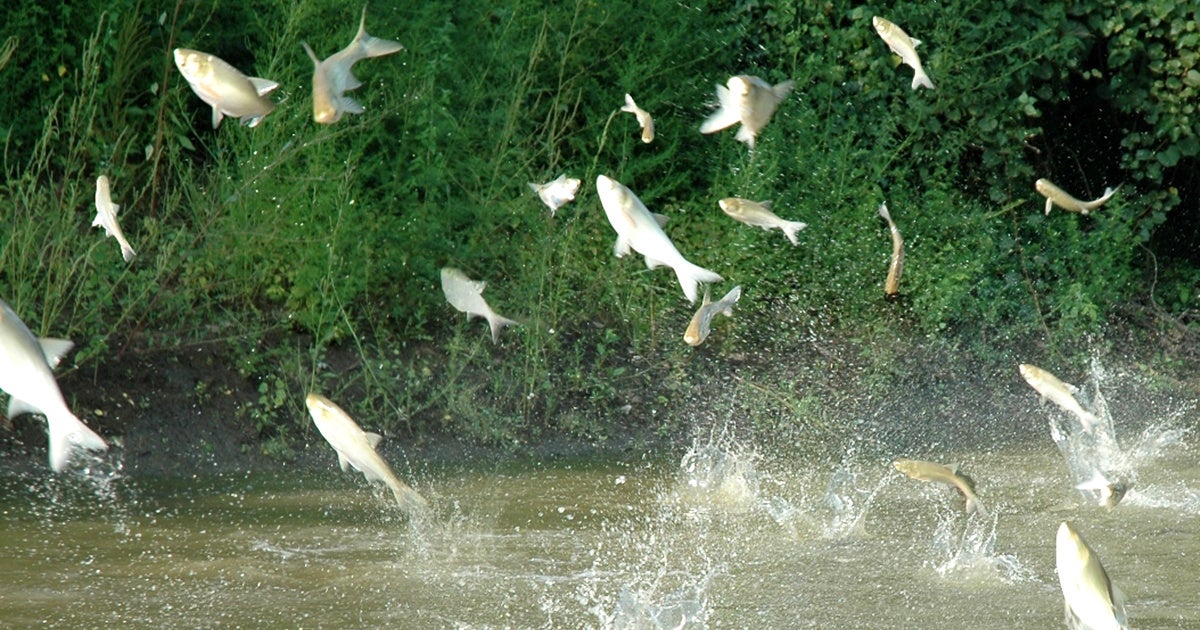 By Marc Yaggi and Sandy Bihn

This barrier along the Des Plaines River, also known as Brandon Lock, in Illinois was part of a plan by the federal government to defend the Great Lakes—the world’s largest inland fishery—from an Asian Carp invasion. With its ability to crowd-out and outcompete American fish populations, this non-native fish species threatens thousands of American fishing and tourism businesses, the job markets of entire communities and more than $40 billion a year in revenue. The Asian Carp threat is powerful enough to unite republican and democratic leaders against it, but Trump has gone soft, choosing this invasive species over American livelihoods.

After escaping containment during floods in Louisiana in the 1990s, Asian Carp rapidly spread. Asian Carp breed like rabbits, eat like pigs and quickly grow so large natural predators can’t kill them. When they enter a river, they consume all the available food, killing off the local market fish population and with it, our fishing businesses. They also have a dangerous habit of leaping out of the water when they hear a boat motor, earning them the nickname “bowling balls,” as the 50+ pounders can hit boaters mid-air, cracking ribs and breaking jaws.

Asian Carp are barging through any nook and cranny they can find that leads to their promised land, Lake Erie. If we don’t stop them, they will quickly make all 95,000 square miles of the Great Lakes their new permanent home, and then have unbridled access to the rest of America’s major river systems. If they penetrate the Great Lakes, we lose jobs, billions in domestic revenue, generations-old businesses and our livelihoods.

Since 2010, the federal government has invested $300 million each year to successfully defend the Great Lakes with Asian Carp river barriers and underwater electric fences around the Great Lakes. Earlier this year, a federal report urged $275 million in both technological and structural improvements at an imperative Illinois lock to prevent these invasive fish from reaching the Great Lakes. According to a report by the U.S. Environmental Protection Agency (EPA) and Canadian counterparts on the state of the Great Lakes in 2017, so far, the barrier efforts defending the lakes from Asian Carp establishing itself in the lake have been successful—but the work isn’t done.

We need to build more controls and continue to maintain existing barriers, yet Trump has chosen a much weaker plan, halting current barrier research and construction and proposing a complete elimination of funding in the future. Broad bipartisan support for a strong Great Lakes defense saved it from cuts in last week’s congressional budget vote. Republicans stood arm in arm with Democrats and refused to sacrifice a dollar with thousands of jobs and businesses at stake.

Why has Trump gone so soft on defense of our Great Lakes economy? Some have speculated that a small special interest group of cargo shippers in Chicago may have an influence on Trump’s decision. They worry a river barrier would slow the movement of goods through the area. In truth, the small industry makes up less than one percent of Chicago’s local economy and businesses will only be inconvenienced while they make the transition to truck and rail transport. It’s a grain of sand in comparison to the threat of Asian Carp to tens of billions of dollars and tens of thousands of American businesses across multiple states.

The real reason is political. Trump is trapped in his own rhetoric. The Brandon Lock barrier study was released in August, but in order to build the recommended barriers, we need a federal budget that adequately funds the U.S. Environmental Protection Agency and programs like the Great Lakes Restoration Initiative. Through the Great Lakes Restoration Initiative, the U.S. Environmental Protection Agency has spent has spent $56.6 million since 2010 on efforts to keep out Asian Carp, yet Trump’s proposed budget would completely eliminate this program. Of course, if you ask any Great Lakes fishermen, they will tell you EPA is their homeland security, guarding their livelihood from this foreign threat. Now it is up to Congress to decide on EPA’s budget, and we need a strong, well-funded EPA if we are to stop the spread of Asian Carp.

Congress: Don’t go soft on Asian Carp when jobs and businesses, including those beyond Chicago, need your strength. Use EPA to build strong river barriers that stop the Asian Carp invasion and save American jobs. Please, do it before it’s too late. If you’re worried about looking like an environmentalist, tell the naysayers and the news media to talk to the people who depend on fishable water. Tell them to talk to the American fishermen of the Great Lakes after you’ve saved their livelihoods from an Asian Carp invasion. If you give EPA the ammunition they need to win this battle, the American families whose jobs you saved will thank you.