America’s Most Obscure Desert Is in Alaska 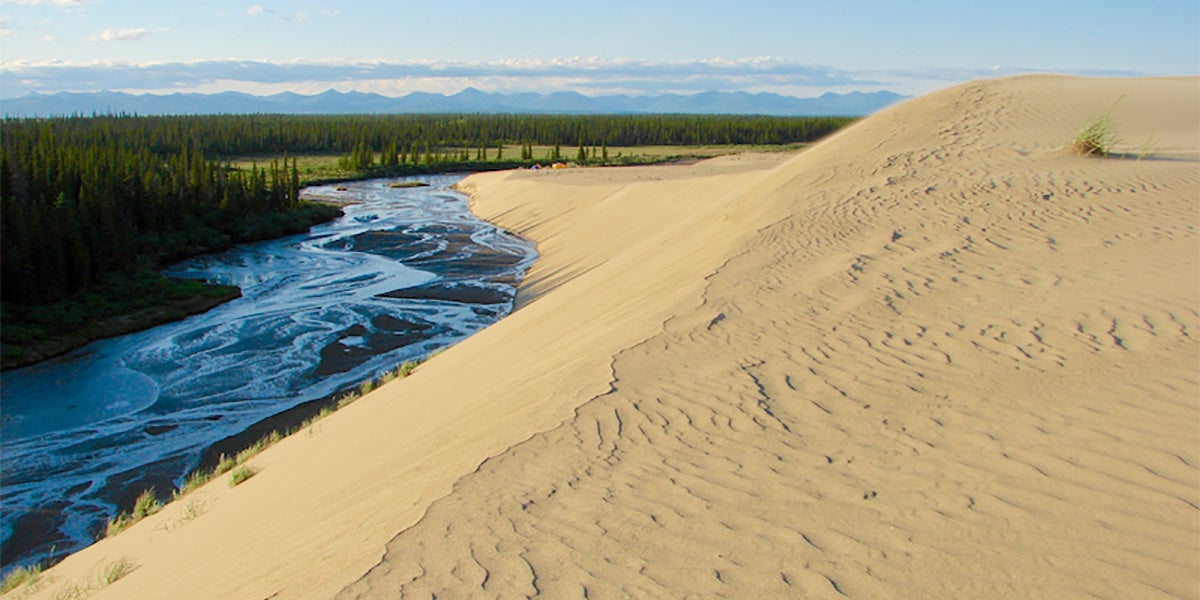 I’m perched on a pile of gear at the lip of a sand dune adjacent to a boreal forest–Lawrence of Beringia. The two Guatemalans I’m shepherding on a weeklong sampler tour of national parks busy themselves snapping last photos of Ahnewetut Creek, which borders the Great Kobuk Sand Dunes’ smooth, scalloped bays. Each time I think I detect our scheduled plane’s whine it turns out to be either a hungry mosquito or just the high pitch of silence in this place. The bugs have been so pesky that my clients proposed camping atop the flat hard-packed sand where the pilot dropped us off two days ago. It’s too far from water, I told them, and that sand would infiltrate every crevice, but even so they took to eating their meals up here, drunk on the views, safe from bloodsuckers and moose marauders, in the herb-scented breeze.

Thirty-five miles north of the Arctic Circle, just shy of Alaska’s Brooks Range, lies Kobuk Valley National Park, one of America’s least explored park units. The reason s evident: To get here, you have to either charter a wheeled aircraft in Kotzebue or else backpack two miles from a loop in the river, delivered by a raft or floatplane or skiff.

Including their Little Kobuk and Hunt River outliers, the continent’s largest active high-latitudes dunes smother thirty square miles like a mini-Sahara. Summer temperatures can hover around 100 degrees, fooling you with mirages–heat waver, anvil-head mountain peaks, sprawling coalescing “lakes.” This is a desert birthed by retreating glaciers.Easterly winds transported rock finely abraded by Pleistocene ice flows, dumping it along the Kobuk Valley. As the climate kept changing, the Aeolian conveyor belt slowed or accelerated, and the dune field shrank or expanded tenfold. The buff humps aligned into serried ridges, divided by 10-story troughs. If the Statue of Liberty stepped off her pedestal, her torch would barely stick out from the tallest mounds.

Signs of wildlife abound. Loons wail. Wolf paws shadow zipper tracks left by caribou from the Western Arctic Herd, often ending in piles of vertebrae. Moose nuggets and bear scat nest in the lichen and moss pillows that abut the sliding cliffs. Willow-stick dams clog the Ahnewetutamidst alders girdled by porcupines; beavers push V-wavelets through its shallows. While I scoop buckets of cooking water for dinner, black beady eyes gleam from a root hollow in the bank.

Like Saint-Exupéry air racing toward Saigon above the Lybian desert, I succumbed to the first sand sea I saw–three decades ago, when a Death Valley “shortcut” almost killed me. The desert is a harsh mistress, strict and serene—it’s hard not to wax philosophical in her presence. Life and death balance on her scimitar edge of curved swells. Echoes of Ozymandias linger. Crazed hermits and prophets inhabit these furnaces, forging messianic religions. Eons unspool in streams of grains running through your fingers, cycled through weathering’s mill not once, but repeatedly. Hunting camps thousands of years old dot the Kobuk dunes’ margins. One wonders what the ancient ones thought of this golden, shifting void.

Scientists, too, rack up field days here, prepping for distant worlds. Comparing satellite images of a single Martian scene over time, astrophysicists discovered dune fronts marching across the red planet. They used a remote-sensing technique they’d developed to estimate the speed of the Kobuk dunes, finding that these Arctic hills progress more slowly than those near the equator. Strangely, the data also suggested that the larger northern dunes inch forward faster than the dwarf ones. Drilling boreholes in March, taking the dunes’ winter temperatures, and scanning them with ground-penetrating radar, the researchers learned that unfrozen crests of some giants—those surpassing their neighbors—bear the wind’s brunt, which gives them more momentum. Snow-covered smaller surges, lee sides, and sinks by comparison remain fairly static. Coated with carbon dioxide and frost, polar dunes on our sibling planet behave in a similar manner.

Inner or outer frontiers—the exquisite parched waste of the Great Kobuk Sand Dunes confounds us with mysteries, compelling us to tiptoe the line between annihilation and thrill.