Is the Great Indian Bustard About to Go Extinct? 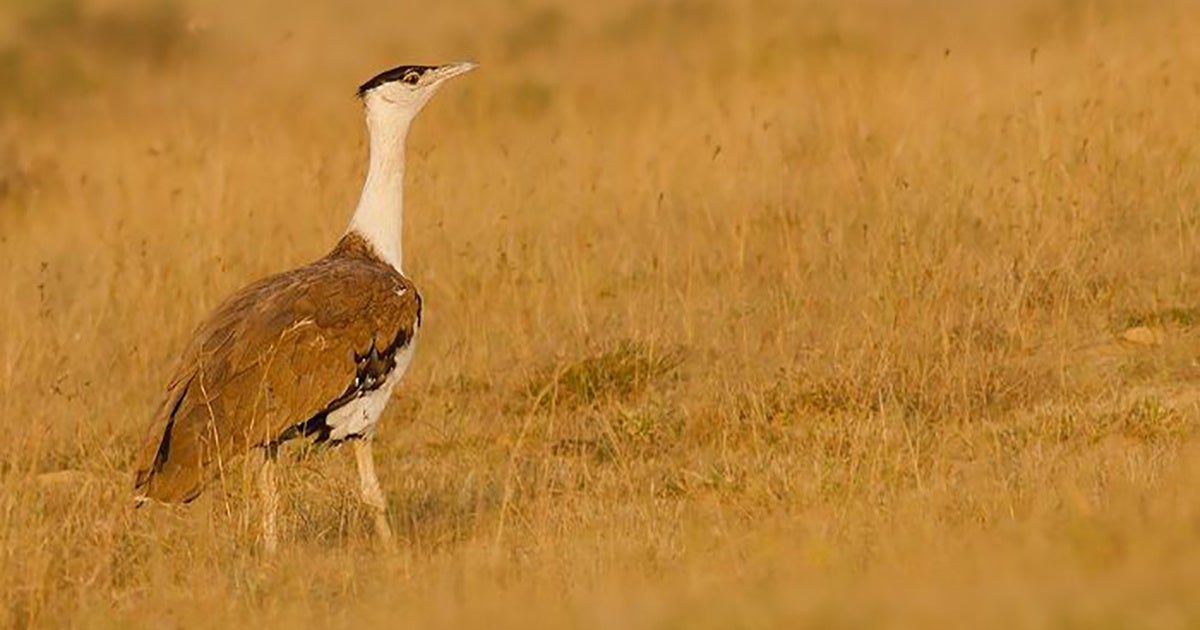 Nearly 60 years ago the legendary ornithologist Sálim Ali made a bold proposition: A three-foot-tall bird known as the great Indian bustard, he suggested, should be named as the national bird of India.

At the time the great Indian bustard (Ardeotis nigriceps) was already a legally protected endangered species, but its population—then estimated at just 1,250 birds—was still on the decline due to rampant poaching and loss of habitat. Giving the bird a national iconic distinction, Ali felt, would motivate efforts to conserve the species before its numbers shrank any further.

“The great Indian bustard is a species that merits this distinction,” Ali wrote in 1960. “It needs an urgent nationwide effort to save the bird from its impending doom.”

Unfortunately that never happened. India eventually did choose a national bird, but that honor went to the peacock, in part because it was better known and, reportedly, because government officials were afraid that people would mispronounce the bustard’s name as “bastard.”

Is the great Indian bustard now paying the price for that lost opportunity? This month scientists in India warned that the species is perilously close to extinction, with a remaining population of just 150 birds.

Even worse, this year researchers have observed just a single male bird—a juvenile too young to mate—at the bustards’ traditional breeding grounds in the Kutch district of the Indian state of Gujarat.

This youngster is the only male to visit the grassland site in some time. “No adult breeding males have been observed on their known breeding territories in last two years,” said Devesh Gadhvi, deputy director of the Corbett Foundation, a nonprofit engaged in great Indian bustard conservation efforts.

A few males have been previously confirmed in the neighboring state of Rajasthan, and Gadhvi says there may be a handful of additional males elsewhere in Gujarat, although there is no data to verify that.

So why has this massive species nearly died out? Sadly, it appears to be a case of decades of neglect, and in some cases outright hostility toward the species.

As Ali warned, the birds have lost most of their historic habitat—currently about 95 percent of where they used to fly—to roadways, mines, canals and other development. In addition, many projects have converted grasslands—which the Indian government classifies as “wasteland“—into wooded areas, inhospitable to the ground-dwelling species. Poaching has also continued to take a toll, especially on birds that have flown into neighboring Pakistan, where the species may or may not still exist.

Those decades were the primary reason for the bustards’ decline, but now a new threat has emerged. Critics say the most recent bustard population drops are due to India’s push for renewable energy.

Over the past few years, important bustard habitats in Gujarat, Rajasthan and other states have been crisscrossed with high-voltage power transmission lines, many of which transmit electricity from wind turbines. The Corbett Foundation has documented numerous cases where power lines have been built right next to bustard habitat or in their migratory pathways. Bustards have trouble avoiding these power lines due to their limited field of vision and heavy weight, which limits their maneuverability. At least 10 birds, possibly as many as 15, are known to have been electrocuted by those power lines over the past decade.

Among those killed were the only two males known to live in the state of Maharashtra. In the Gujarat region, Gadhvi says other males may have died “from colliding with the newly installed high-tension power lines right between their breeding and wintering ground.”

Renewable-energy projects in India do not require environmental impact assessments, a loophole that has left the birds particularly vulnerable even as the country races to build its energy capacity. India added nearly 12,000 megawatts of renewable-energy projects between April 2017 and March 2018 and plans to add another 175,000 by the year 2022.

Can the energy grid be made safer for the bustard? “There has to be a will and there has to be a way,” said Valli Bindana, director of the new documentary SunGanges, about the environmental impacts of India’s energy policies. “People elsewhere have made grids ‘avian safe.’ Perhaps we need to borrow expertise. But whatever has to be done has to be done quickly.”

With this critically endangered species facing an uncertain future, experts and advocates from numerous conservation groups have called on the Indian government to do something wile there is still a great Indian bustard to protect. “These issues have been raised with the hon’ble Prime Minister of India…and the State Government of Gujarat but except [for] lip service none have taken this matter seriously,” the Corbett Foundation wrote recently on Facebook. “It is a national shame that we are allowing this species to go extinct despite knowing what should and can be done to prevent this.”

Maybe they should have listened to Sálim Ali in the first place.