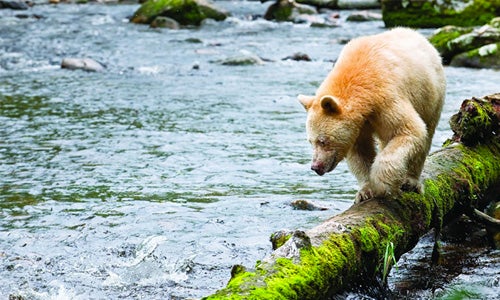 A great swath of primeval forest runs 250 miles up the coast of British Columbia, from the northern tip of Vancouver Island to the southern tip of Alaska. The area includes a rare and endangered ecosystem of cedars, spruce and Douglas fir, a habitat for salmon, wolves, cougars, grizzlies and the rare white Spirit Bear. It is also home, livelihood and sacred place to 27 First Nations, the indigenous people whose ancestors have lived there for 10,000 years. 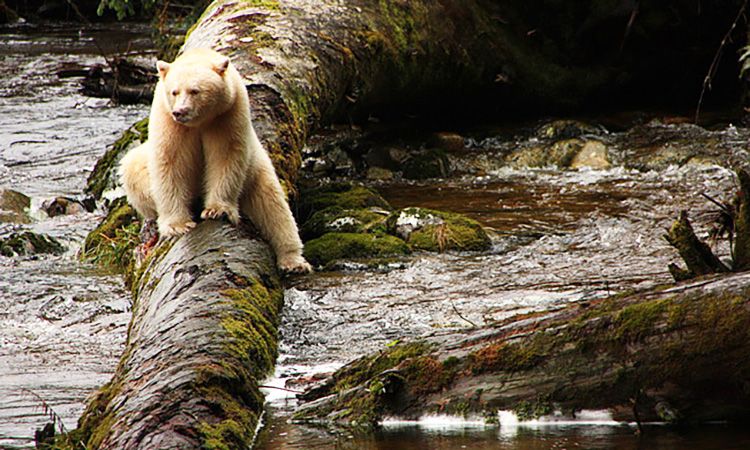 This is the Great Bear Rainforest (GBR), recently protected under what has been widely hailed by environmentalists as a model agreement to conserve 85 percent of old growth in the world’s largest intact temperate rainforest.

It has taken 20 years, intensely dedicated work and worldwide support to forge the agreement, an impressive achievement that looked highly unlikely when efforts to save the GBR began in the mid-1990s. Back then, less than 10 percent of the rainforest was protected from logging and it was common practice to saw magnificent cedars into decking planks and pulp ancient timber for newsprint.

Jody Holmes of the Rainforest Solutions Project is a scientist by training who spent much of the past 20 years at the table negotiating for the protection of Great Bear. Lately, she’s been reflecting on the many changes that contributed to reaching the final agreement and why it took two decades.

“It took quite a long time­­—even with environmentalists creating big splashy stories in the New York Times and elsewhere­­—to wake people up to the fact that there was a global treasure here,” she said. But bringing environmental groups, forest industry companies, 27 First Nations and the government to a land-use agreement that would allow a logging industry while protecting enough old growth forest on 6.4 million hectares of land was no simple task.

The process started in 1993 with efforts to save old growth forest on Vancouver Island’s Clayoquot Sound—soon to be dubbed the “War in the Woods.” Environmentalists and members of First Nations chained themselves to bulldozers and blocked roads in an effort to stop logging of a unique and pristine ecosystem. The protests and direct actions resulted in a record number of arrests and generated media images that caught the world’s attention, but the logging industry attempted to carry on as usual. There appeared to be no areas for compromise.

When conservation efforts moved on to Great Bear in 1995, the conflict between loggers and environmentalists seemed ready to boil over. Then Greenpeace launched a worldwide campaign to boycott products made from GBR old-growth timber.

“It became controversial to invest in companies operating in the Great Bear or to buy products coming out of it,” said Eduardo Sousa, a forest campaigner for Greenpeace, “to the degree that $600 million worth of paper contracts with a German publishing company were almost cancelled. Because the companies themselves were global, the issue and campaign went global and everything escalated up a few notches.”

Under pressure from consumers and public opinion, the forest industry launched its own media and PR counterstrategies. But the protests were having an impact and the boycott created market uncertainty.

Patrick Armstrong, a solutions consultant for the forestry industry who was in the thick of Great Bear negotiations, sounds weary when he describes those years. “It became clear that industry needed a different approach,” he said, “and it began to engage with the environmental community. At the same time, I think the environmental community realized that they needed to engage with industry.”

In 2000, that realization resulted in the Joint Solutions Project, an initiative to use conflict resolution and a multi-interest approach in GBR negotiations. It was sealed with a deal that environmental groups would halt the market campaign if companies agreed not to log in 100 pristine valleys. The interested parties also agreed to use scientific evidence to determine if and how logging could continue while conserving the forest—a system known as ecosystem-based management (EBM), which analyzes land-use proposals to minimize impact, preserve habitat and repair damage.

“Twenty years ago, nobody thought twice about just going into a valley and clear-cutting forest up to the top of a mountain and scooping the whole thing out,” Holmes said. In contrast, the final GBR agreement boasts the strictest standards for controlled logging in North America. What that will look like on the ground, said Holmes, will vary according to area and a list of priorities.

“Some of the logging will be lighter touch and some heavier touch,” she said, going on to describe how, in the southern region, which has already been heavily impacted, there will be a reserve network to restore old-growth characteristics—a long-term effort. An exceptionally light touch will be used on the north coast, with buffers along the major river systems and protections for grizzly bear trails. Patches of harvesting will occur higher up, with protections for the monumental cedars and anything of cultural significance to First Nations. “You’ll also see little tiny streams and things like goshawk nests protected,” Holmes said.

Harvests will occur and some areas will appear to be clear-cut, she said, but there will be fewer of them and they will be built around key ecological features in the landscape. Overall there will be a slowing of the amount of harvest on the landscape over time.

When the GBR agreement was announced in Vancouver on Feb. 1, it marked a major accomplishment for indigenous land rights. First Nations leaders, environmentalists, timber CEOs and BC Premier Christy Clark walked down a passage lined with totem poles, in a ceremony that included traditional regalia, drumming and song.

The years of the GBR negotiations were also a period of land rights activism in general for First Nations in BC. The Canadian Supreme Court made several rulings in favor of aboriginal title, which contributed to a process of rebalancing power. In the final stages of the agreements, First Nations and the provincial government of BC were joint decision-makers. Industry and environmental groups acted as stakeholders, recommending solutions to the “government-to-government” decision-makers.

“It wasn’t always like that,” Sousa said. “There should have been a lot more First Nations engagement throughout the entire solutions-making process.” That lack of direct engagement, he said, was a historical issue related to colonialism. Environmentalists and industry had more power early in the process. However, “It is now enshrined in various mechanisms through the government-to-government process that First Nations can no longer be marginalized.”

Marilyn Slett, chief councillor of the Heiltsuk Tribal Council, is one of the First Nation leaders who was present to usher in the GBR agreement. She reflects on the days when the BC government granted logging tenures in First Nation traditional territories “Without our consent—without our knowledge, there were no consultations. All of this led to a lot of frustration among the communities that make up the Great Bear. We were tired of being excluded from decision-making processes that directly impacted our traditional territories.”

Slett attributes major progress to the organizing efforts of Coastal First Nations, an alliance of communities along BC’s coast, to develop a sustainable economy while preserving the cultural and ecological diversity of the GBR.

“I do think having our communities be able to demonstrate that we are organized, that we have our own stewardship principles, made a difference. For us it’s about taking care of our land, having proper stewardship over our land,” Slett said.

Douglass Neasloss remembers how logging companies started putting roads through his Kitasoo/Xai’xais community when he was in high school. The province had issued industry permits without consulting the people who lived there, he said. Now, as resource stewardship director for the Kitasoo/Xai’xais Integrated Resource Stewardship Authority, he said that decision-making authority for First Nations resulted in a GBR plan that protects culturally important areas and jobs.

“Provincial government and environmental groups needed to understand that there are people still living here, who have always lived here, who need livelihoods,” he said. “And when the enviros came up with recommendations for areas to protect for the 2007 agreement, the First Nations saw that there were many culturally important areas left out—so there was a lot of back and forth to make sure those areas were included.”

That back and forth is not quite over, according to Neasloss. “We think the agreement is a huge step in the right direction. But my community has always said the agreement is only as good as governance and enforcement for environmental protection. We’re in some fairly remote areas that need monitoring, where a lot of illegal activities were going on back in the day, so every First Nations community along the coast from Haida Gwaii to the north of Vancouver Island has its own Guardian Watchmen to monitor and protect their lands and waters.”

Currently, GBR is managed by the BC parks system, but it’s severely underfunded, Neasloss said. “I run a six-person Watchmen program on $210,000. BC’s Central Parks manages an area the size of Switzerland on $20,000.”

Appropriately for the unique ecosystem it protects, the GBR agreement has been described as something special, a new standard for comprehensive land-use plans. That’s significant at a time when multiparty agreements are critically important to save not just endangered ecosystems but our imperiled atmosphere.

Old-growth forests like Great Bear sequester enormous amounts of carbon, a significant factor for slowing global warming. The agreement’s most recent conservation measures alone will lock up an additional 640,000 metric tons of carbon pollution per year.

This month, a delegation from the Cree First Nation of Waswanipi in Quebec, which wants to protect the forests of its traditional lands, traveled to BC to learn more about the Great Bear Forest Carbon Project, the offset program established through GBR negotiations. And the Great Bear agreement is being noted even further afield. Slett has already received an invitation to speak to Maori colleagues in New Zealand about eco-based land management through Great Bear.

Every region faces its own cultural, economic and political challenges, but environmentalists are cautiously optimistic that Great Bear can provide a model and hope, for other environmental struggles, especially those where indigenous land rights are a factor.

“There was no blueprint for this,” Sousa said of the two decades of efforts to conserve Great Bear. “We’re in a different era now in terms of climate change, First Nations and indigenous land rights than we were 20 years ago. If anything else like this was to be attempted here now, it probably go much quicker.”

20 Stunning Photos of the World’s Most Beautiful Trees