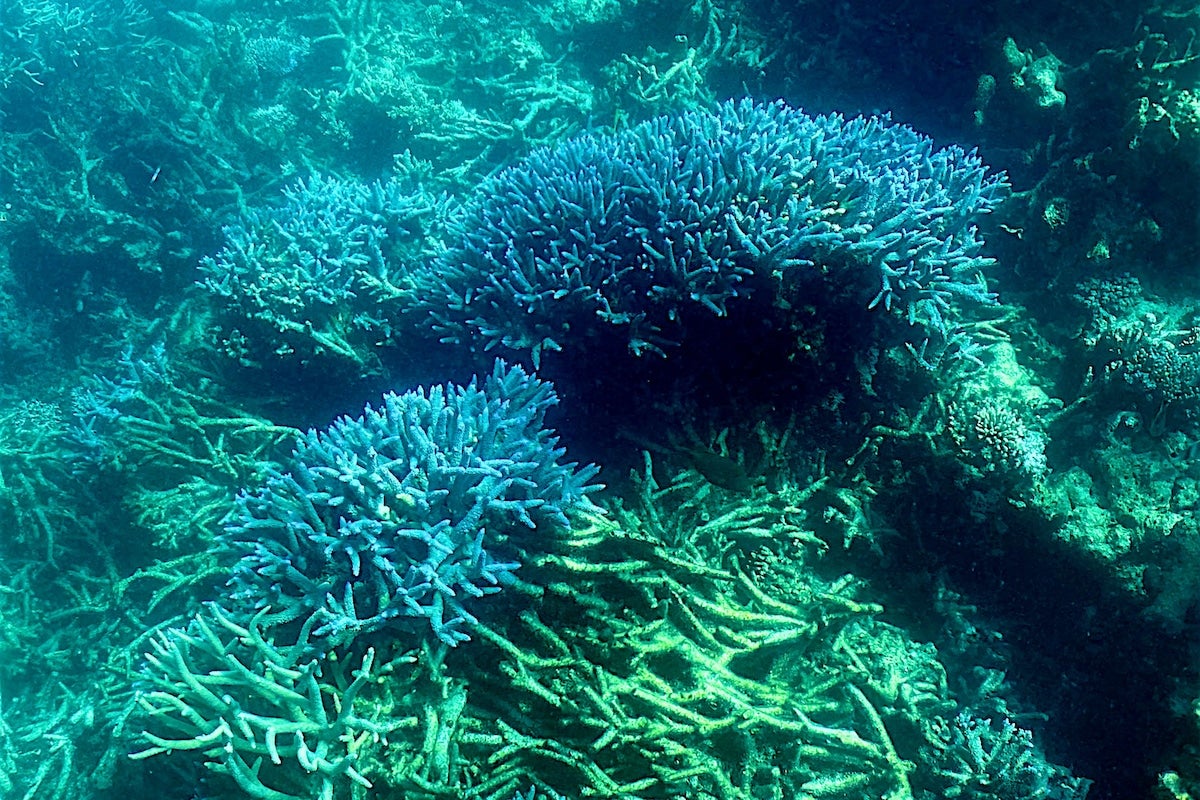 More than 90 percent of the Great Barrier Reef was impacted by coral bleaching during the Australian summer of 2021-2022.

This is the conclusion of the Great Barrier Reef Marine Park Authority, which released the results Tuesday of aerial surveys taken of 719 reefs between Torres Strait and the Capricorn Bunker Group.

The surveys revealed that 654 reefs, or 91 percent of those surveyed, had experienced some bleaching. The bleaching is especially notable this year because it is the first time it has happened under La Niña conditions, which usually result in cooler ocean temperatures in the Pacific Ocean, as AP News pointed out.

“This is heartbreaking. This is deeply troubling,” Climate Council researcher Simon Bradshaw told AP News. “It shows that our Barrier Reef really is in very serious trouble indeed.”

Coral bleaching occurs when warmer than normal ocean temperatures turn the chemicals that coral-dwelling algae produce into poisons, prompting the coral to expel the algae. Because the algae provide the coral with both nutrients and color, the remaining coral turns white.

This summer, the waters around the Great Barrier Reef began to heat up in December of 2021, the authority said. Ocean temperatures exceeded historical summer maximums that typically don’t occur until later in the summer. Between December and early April, the area experienced three distinct marine heat waves. The surveys were conducted after the last heat wave, which lasted from March 12 to 23.

The bleaching recorded in the report does not necessarily mean that the impacted corals will die.

“It is important to note that bleached coral is stressed but still alive,” the authority wrote. “As water temperatures cool, bleached corals may regain their colour and survive this stress event, as happened in 2020 when there was very low coral mortality associated with a mass bleaching event.”

During back-to-back mass bleaching events in 2016 and 2017, however, the reef experienced higher death tolls, according to AP News. Scientists predict that this year will be more like 2020.

“The early indications are that the mortality won’t be very high,” the authority’s chief scientist David Wachenfeld said, as AP News reported.

However, the reef remains in hot water as long as greenhouse gas emissions continue to rise. The authority has said that the climate crisis is the single biggest threat to the reef, and a 2020 study found that the reef had already lost more than half its corals in the past 25 years because of human-induced global warming. The Intergovernmental Panel on Climate Change has warned that allowing temperatures to rise to two degrees Celsius above pre-industrial levels will kill 99 percent of all tropical reefs, while limiting warming to 1.5 degrees could save 30 to 10 percent of them.

The report comes as Australia prepares for federal elections later this month, AP News noted. Current Prime Minister Scott Morrison’s Liberal Party has promised to reduce greenhouse gas emissions by 26 to 28 percent below 2005 levels by 2030, while the Labor Party has promised steeper cuts of 43 percent by 2030.

Australian Marine Conservation Society campaign manager Lissa Schindler told The Guardian that reducing emissions should be a priority for the next government.

“This was a La Niña year, normally characterised by more cloud cover and rain,” she said. “It should have been a welcome reprieve for our reef to help it recover and yet the snapshot shows more than 90% of the reefs surveyed exhibited some bleaching. Although bleaching is becoming more and more frequent, this is not normal and we should not accept that this is the way things are. We need to break the norms that are breaking our reef.”