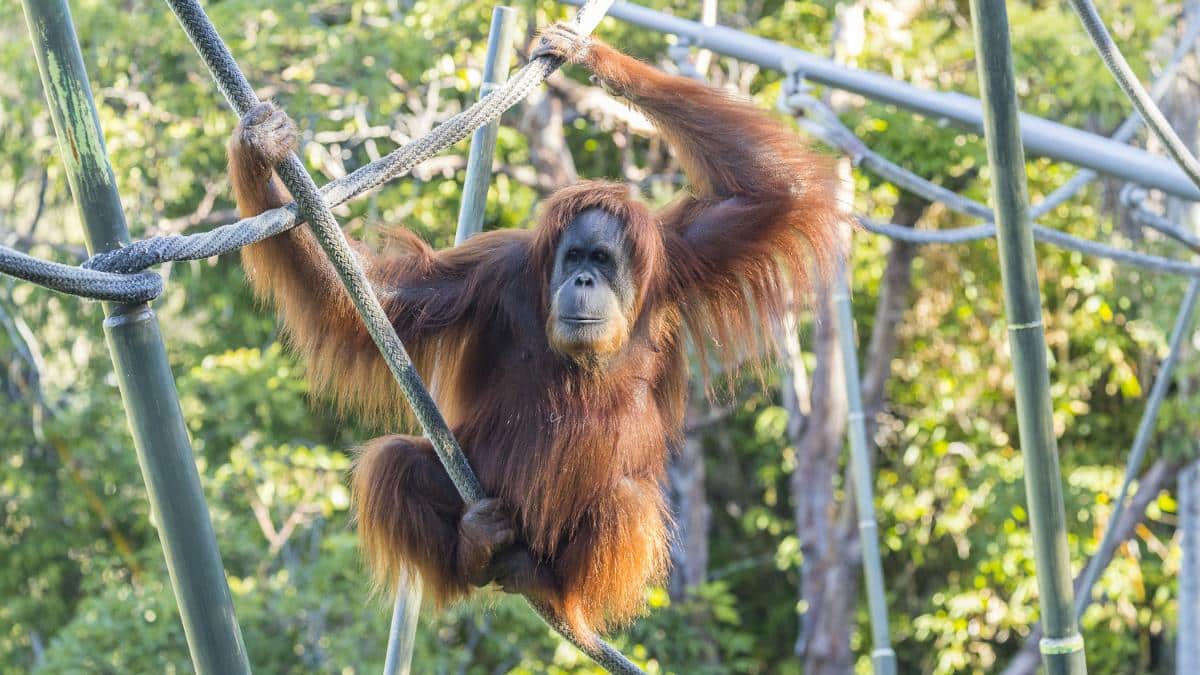 Four orangutans and five bonobos at the world-famous San Diego Zoo have become the first great apes in the world to be vaccinated against the coronavirus. The great apes received a COVID-19 vaccine made especially for animals.

In January, a troop of eight western lowland gorillas at the associated San Diego Zoo Safari Park contracted the contagious virus. They were the first great apes in the world to test positive for SARS-CoV-2, the virus that causes COVID-19, the San Diego Zoo Wildlife Alliance (SDZWA) confirmed. The organization includes both the San Diego Zoo and Safari Park.

The infected animals exhibited mild to concerning symptoms, including runny noses, cough, wheezing and lethargy. One, a 49-year-old silverback named Winston, fell ill with heart disease and pneumonia, but recovered after receiving an experimental antibody treatment, National Geographic reported. At this point, the entire troop is doing well and have fully recovered, a SDZWA spokesperson told EcoWatch.

“COVID has shown us that human health and wildlife health are inextricably linked,” said Nadine Lamberski, SDZWA’s chief conservation and wildlife health officer. “San Diego Zoo Wildlife Alliance recognizes that the documentation of the SARS-CoV-2 virus in gorillas at the San Diego Zoo Safari Park may provide important information regarding scientific understanding of the virus and its effects on great apes.”

It’s suspected that the apes caught the virus from an infected worker despite mask usage, NBC reported.

The troop’s infection caused particular concern because less than 5,000 wild gorillas remain, National Geographic reported. Because they live in close family groups, when one animal catches the virus, the infection can quickly spread and decimate an entire family group. With such low numbers remaining, every loss is detrimental to the survival of the species.

As a precautionary response to the ape infections in January, SDZWA veterinarians identified which of the zoo’s great apes were high risk and could be easily vaccinated, the spokesperson said.

“[We realized] that our other apes were at risk,” Lamberski told the San Diego Tribune. “We wanted to do our best to protect them from this virus because we don’t really know how it’s going to impact them.”

“Our friends at Zoetis, a veterinary pharmaceutical company, provided our veterinarians with a limited supply of recombinant purified spike protein vaccine, intended for use in protecting animals against SARS-CoV-2,” she told EcoWatch. “The vaccine doses originated from a supply strictly intended for nonhuman use. We received enough doses to vaccinate 13 animals.”

Two doses of the new, experimental animal vaccines were given to troops of bonobos and orangutans, and the remaining doses will go to other gorillas that weren’t yet infected, SDZWA confirmed. The previously infected gorillas did not receive the vaccine as they have already been exposed to the virus and are presumed to have developed antibodies.

According to the San Diego Tribune, gorillas, bonobos, orangutans and chimpanzees are the closest cousins to humans, placing them at high risk for contracting the coronavirus.

The animals that received the vaccine are doing well and no adverse reactions have been observed, SDZWA reported. They will continue to be closely monitored and receive periodic exams. SDZWA also added that they would look into vaccinating other high-risk animals should the zoo receive more vaccines.

Around the world, coronavirus infections have also been confirmed in tigers, lions, mink, snow leopards, cougars, a ferret, dogs and domestic cats.

Vaccine manufacturer Zoetis has been discussing using these vaccines at other zoos, as well as at commercial mink operations, and plans to make additional doses available soon.

SDZWA will share what they learn from this experience with global conservation organizations and wildlife care professionals at more than 200 zoos worldwide.

“This is a really precious opportunity to observe what happens to endangered great apes when they’re vaccinated to a potentially important disease,” UC San Diego Zoologist Pascal Gagneux, an expert on primate evolution, told the San Diego Tribune. “Nothing prevents COVID-19 from starting to infect the wild populations.”