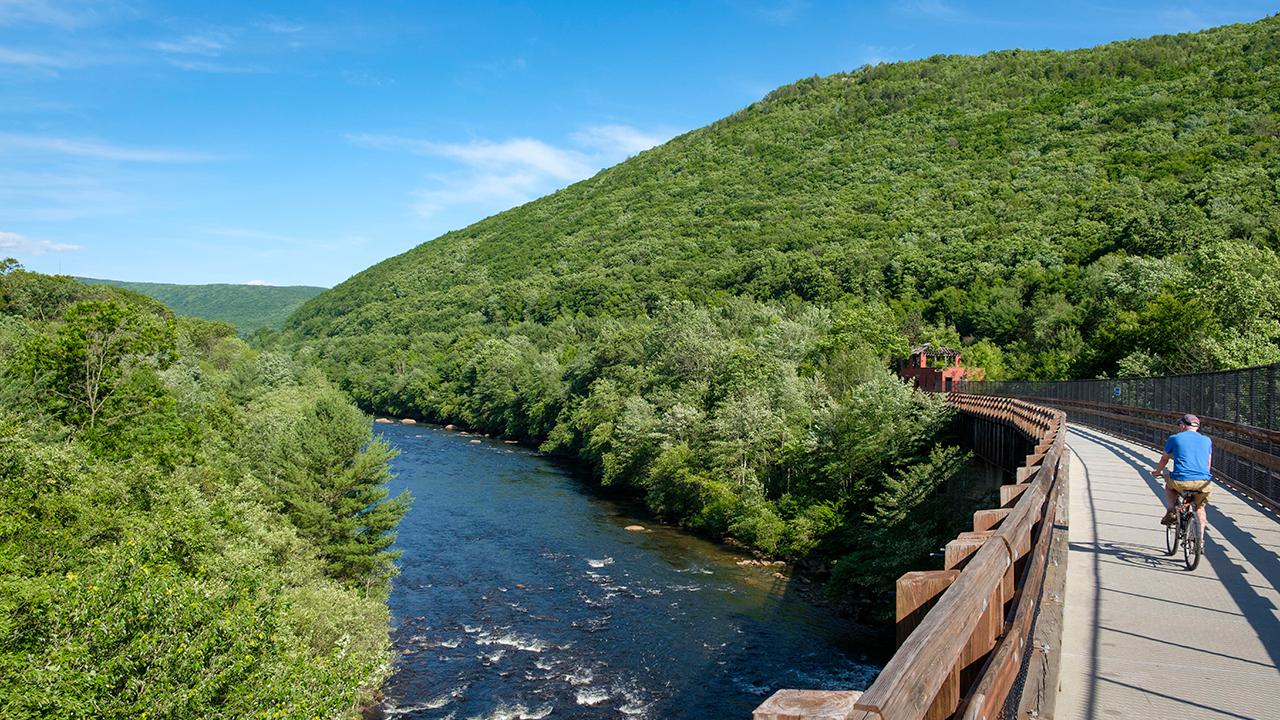 Stretching almost 6,000km and crossing 12 states, the Great American Rail-Trail will enable cyclists, hikers and riders to traverse the entire US.

The multi-use trail will run from Washington DC in the east to Washington state on the Pacific coast. Launched in May 2019, the route will eventually connect more than 145 existing paths. So far more than 3,200km of it has been completed.

Decades in the making, the project is led by the Rail-to-Trails Conservancy (RTC), which has raised more than $4 million in public and private funds. It will serve 50 million people within 80km of the trail once finished.

Rail trails – paths built on disused railway tracks – and other recreational routes have proved invaluable respites for many during the COVID-19 pandemic, providing alternative commuting routes and space for people to exercise, often near built-up urban areas.

“This year has proven how vital projects like the Great American Rail-Trail are to the country. Millions of people have found their way outside on trails as a way to cope with the pandemic,” said Ryan Chao, president of RTC.

“As the Great American Rail-Trail connects more towns, cities, states and regions, this infrastructure serves as the backbone of resilient communities, while uniting us around a bold, ambitious and impactful vision.”

While multi-use trails can be used by anyone from joggers to horse riders, cycling has become particularly popular during lockdown both as a form of exercise and a method of transport. Bike sales soared across the world as people sought to avoid public transport.

There are the obvious health benefits of traveling by bike. Not only does it provide an aerobic workout and trigger the body’s feel-good chemicals, endorphins, cycling is also easy on the joints, builds muscle, increases bone density and helps with everyday activities. Cycling is also seen as a way of handling post-pandemic pollution levels.

Paris is just one place planning to become a ’15-minute city’, where everything you need is within a 15-minute radius by foot or by bike.

Milan is implementing a similar program, while Buenos Aires has introduced free bike rental schemes. Europe has spent 1 billion euros on cycling infrastructure since the pandemic began, according to the European Cyclists’ Federation.

Cycling Routes Across the World

At around 5,955km, the Great American Rail-Trail may be particularly ambitious in terms of scale, but it is one of many innovative cycling projects across the world. The 4,450km EuroVelo 6 route runs through 10 countries as it crosses Europe between the Atlantic and the Black Sea.

The 346km Transpennine Trail across the north of England, which opened in 2001, uses disused railway tracks left empty after the decline of the coal industry and passes through city centers, heritage sites and national parks on its way between coastlines.

Last year, the UK launched the 1,300km Great North Trail running from the Peak District in the north of England to John O’Groats at Scotland’s north-eastern tip.

In the Belgian province of Limburg, the Cycling Through Water path enables cyclists to cut through the ponds of Bokrijk. The 200-meter path is at eye-level with the water, allowing riders to glide across the lake.

Meanwhile the 7.6km Xiamen bicycle skyway is the world’s longest elevated cycle path and runs above the Chinese city’s road network. It has capacity for about 2,000 cyclists during rush hour, with much of it suspended under an elevated bus lane, providing shelter from the weather.